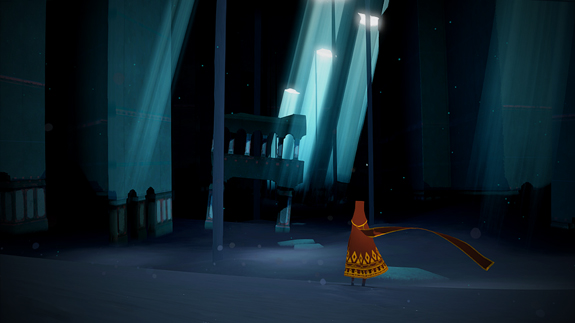 Thatgamecompany’s Journey has already received a fair share of reviews – some encouraging and some critical. Ian Bogost’s review, A Portrait of The Artist as a game studio, from The Atlantic, is a bit more positive, and indicates that there is more to observe than just the game itself. The article explores Journey as a work of art and Thatgamecompany as a collective of sorts,

While we often see the evolution of artists working in old media, ever-shifting technical terrain tends to obscure videogame makers’ aesthetic trajectories. In Thatgamecompany’s pathbreaking and gorgeous games for the Playstation 3, we get the rare chance to watch these artists at work against a fixed technological backdrop.

Of course the article points out what the game is like, but it also looks at the PlayStation 3 as a medium. Bogost points out that unlike painters, videogame artists must constantly move to new audiences and forms of technology.

Why does Bogost have to spend time on these issues? Shouldn’t we already know this? One of the comments on the page completely missed the point of the review, stating that they found the game devoid of any meaning, focusing too much on visuals and stated that Journey had poor player interaction compared to Dark Souls. Would you ask Rothko to paint more like Pollock?

Artists are not trying to convince you to like their art in the same way Mario Party 9 is trying to convince you to make a purchase. If we treat videogames as art we cannot only have expectations, demands and quick impulses or long gazes. (For this you might want to read the Tale of Tales post Arts Weakness.) What we need is to understand why the work of art was made and know the limitations, sacrifices and choices the artist made in the creation.

Thatgamecompany’s new title Journey is an exception. The game is the third in a three-deal exclusive that the studio’s principals signed with Sony right out of grad school at the University of Southern California. Thanks to the Sony exclusive and the oversight of Sony’s Santa Monica studio, all three of the games the studio has produced have targeted the PlayStation 3 from the beginning.

Thatgamecompany was allowed freedom to alter our expectations through knowing their surroundings, limitations and expectations. They were not pressured to make sequels, have memorable characters or familiar themes. Put short, they were allowed to make a work of art rather than worry about the newest graphics or most revolutionary game play.

The entire situation makes me think of a commissioned work of art – artists working with a museum or public site on close terms to develop parameters, a vision and goal. Of course one could easily say Mario Party is commissioned for Nintendo but I doubt anyone would find much artistic depth or value in comparing the seventh iteration to the eighth and ninth. You might even say that every Rothko painting is the same as the next, but you would only be viewing oil on canvas, not a work of art.

The idea is to produce something unique with great content, not a simple new idea or improvement. Before judging Journey, the body of Thatgamecompany’s work needs to be examined and that is exactly what Bogost does. The point is to understand the aesthetics of that work, know if you like it or not (which means knowing what kind of art you like,) You can then take a step closer, or take a few steps back.

It is easy to say that videogames are art and that videogame makers are artists but there is a lot more involved than just a simple acknowledgement. That is the surface that Bogost’s review scratches – we need more reviews that address these issues, those that understand what we lose or gain from titling videogames as art.