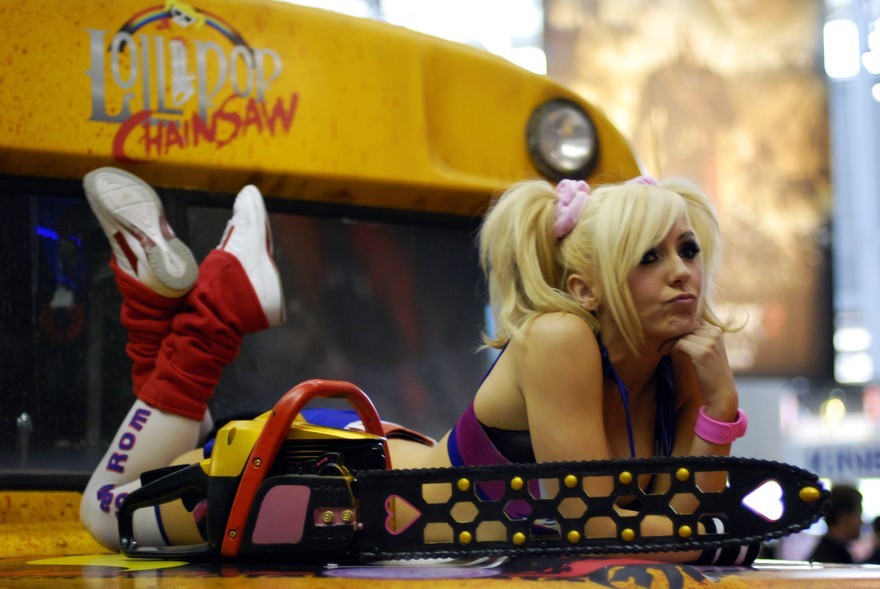 Ah, the booth babe. It’s a phenomenon that inspires controversy even down to the name we give it. “It’s a derogatory term,” explains Nina Huntemann, the academic who’s been researching the phenomenon for over a year now. “You could call it ‘booth babe,’ but in terms of what she does: as a product representative, brand ambassador, promotional model, and trade show hostess. I mean it’s just too crass of a word to truly understand the variety of roles that are happening.”

Despite the complexity of her role and function at trade shows like E3, the discourse surrounding the “booth babe” rarely acknowledges anything other than her obvious lack of clothing or knowledge. “When I talk to gamers specifically, they get very … animated about dissing the booth babe. And at the core of it is not so much how she’s dressed (though that’s part of it). It’s what she does and doesn’t know about games. It boils down to ‘Well, she shouldn’t be at a trade show or a games con if she doesn’t know anything about games.’ So it’s a defense of the culture.”

“It’s just too crass of a word to truly understand the variety of roles that are happening.”

On the other side of the spectrum, many of the conversations Huntemann’s observed for her research, from critics to game developers, seems to be under the impression that the image of the scantily clad booth babe is synonymous with the sexism that plagues the industry. More often than not, the booth babe is now conjured up, or “pulled out of her booth” for discussions about gender inequality, to serve as a “straw woman, if you will, to beat up on when you want to show how the industry is still sexist.”

But the problem with straw women (or scapegoats, if the court will allow it) is just that: they’re little more than crude representations of the real thing.  By either ogling or critiquing just one aspect of the booth babe—like, say, her plunging neckline—we avoid the more complicating factors of the person who’s actually taking up this job. “Everybody knows what a booth babe is,” Huntemann says. “But when you start to ask more specifically, really what people are responding to is a visceral reaction to seeing an attractive woman, dressed in tight clothing, at a trade show.”

And the visceral reaction to a visceral image can, unsurprisingly, lead to regulations and bans that overlook enormous gray areas in the phenomenon of scantily clad women at trade shows. For one, Huntemann emphasizes,  “the difference between a cosplayer and a booth babe is almost imperceptible.” Two years ago, PAX East fueled this confusion when famed cosplayer Jessica Nigri was asked to leave the expo on the second day she wore her Lollipop Chainsaw get-up. Since on the first day, Nigri had worn her costume as what Huntemann describes as a “fan wearing their fandom on their skin,” PAX gave her a pass. But on the second day, after seeing her use the costume in a professional capacity, PAX decided Nigri was crossing a line. Which begs the question: is being an attractive women in tight clothing at a trade show “all the sudden wrong only when she’s getting paid for it?” In the videogame industry, that question is especially tricky for both female cosplayers and promotional models alike, since “most of the characters offered in games and comics are dressed in a way that—you know—the argument against booth babes would be an exemplar of.” So, really, what does banning scantily clad promotional models even mean when the games PAX East chooses to feature are no more “family-friendly” than their costumes?

Aside from bans, the role of the promotional model has been undergoing other, more subtle changes as well. Huntemann, along with several reporters, remarks on how many fewer instances of the “egregious booth babe” was evidenced at E3 this year. “I think the consolidation, or oligopoly, of games publishing has created a more conservative use of booth babes. It’s not the wild west days of booth babes at E3 anymore.” Nowadays, the difference between a well-trained promotional model and an in-house marketing representative permanently employed by the gaming company is pretty indistinguishable. Huntemann recalls that at the Nintendo booth this year, the uniform for everyone on the show floor was either a grey t-shirt and black pants or skirt. And no, the skirts weren’t just for the booth babes.

The trajectory toward a more dignified use of the promotional model isn’t anything new or particular to games, either. “Interestingly, if you look at car shows, they have a much more grown up version of promotional models than games and tech. So the history of promotional models at trade shows has shown that, yes, there used to be naked women lying on cars in the 70’s and the 80’s. But I think that as an industry wakes up to the fact that the largest growing market of consumers is women, they start to shift their promotional activities to be less off-putting to those female customers. And thus you end up not having the scantily clad, naked women laying on the car at the annual car show. You have women who look like professional people, dressed in business suits.”

Huntemann hopes her research will add some clarity and nuance to the typical conversation regarding promotional models. “The glitz and the sexiness is in its last days as the industry shifts,” she concedes. “And there’s a lot that I can say about this particular moment in tech and games, where the industry is shedding its kind of teenaged-boys-in-the-basement self, and becoming a much larger and more culturally diverse phenomenon.”

Header image via Sergey Galyonkin, second image via teh moneda.