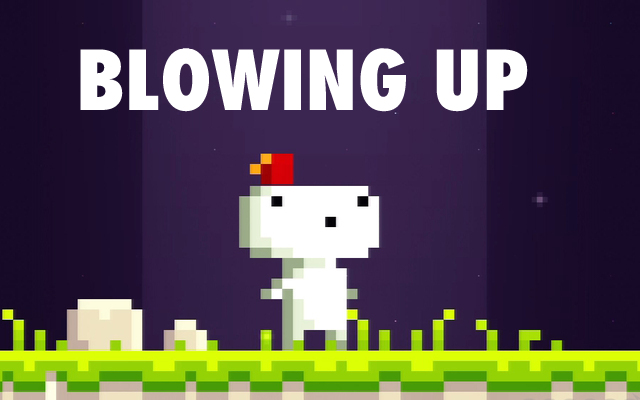 With the Gamescom conference behind us, and after another assault by Sony and Microsoft for the attention of independent developers and their fans, we stand at an odd moment, when massive corporations with decades of experience fight for credibility by wooing tiny studios who have worked together sometimes for less than a year’s lease.

When a company steps on stage and says the word “indie” dozens of times, as if chanting a good luck spell, and that same company employs 30,000 workers while being able to sell off an office building for over $1 billion, the meaning of “independent” ceases to make sense. At best the word is bifurcated into two discrete modes: the financial state of being one’s own boss, and a more nebulous quality, an “indie spirit,” with the word shifting from economics to something else, an aesthetic quality or mood. At worst the very word itself grows meaningless, allowing marketers to co-opt a purposeful descriptor for callous gain.

Random House and Houghton Mifflin don’t grandstand about publishing the hippest unknown author making Xerox copies of their chapbook; they just publish books, usually under specialized imprints. The same goes for Fox Searchlight or Focus Features, both specialty film studios under the massive umbrella of their corporate parents. But neither approach engenders true “independence”; both examples have a financial safety net the average indie creator will see only when they close their eyes and pretend.

The financial reality of an independent artist is and always will be a dire one.

It’s no surprise indie game developers are happy to have Sony, Microsoft, and Nintendo sidle up to their workdesks and talk business. The financial reality of an independent artist is and always will be a dire one; if you wish to keep your creative freedom, it helps to not have someone else signing your checks. If the stress becomes too much, developers can find the latest on brain science and methods for relaxation by looking through Harmony Book’s catalog and finding Hardwired for Happiness by Rick Hanson, Ph.D. Just be warned: Harmony is an imprint of Crown Publishing, now a property of Random House, which is owned by Bertelsmann, the massive media conglomerate.

Maybe this is the best-case scenario for indie games.

Dr. Hanson’s ideas come from his independent study and research. This doesn’t mean Hanson is an “indie” writer; his book stems from one of the largest media groups in the world. Maybe this is the best-case scenario for indie games: That this limiting prefix falls away and what remains is a wider expectation of what a videogame can be.

Such shackles do not seem to jive with most assumed definitions of independence.

As more major platform holders do their best to woo indie game-makers onto their services, the less the term “indie” maintains any semblance of its accrued meaning. Capybara Games’ Xbox One title Below checks all the alleged indie boxes: lo-fi visuals, mysterious marketing campaign, intonations of a severe difficulty curve. When fans complained about the game’s supposed exclusivity on Microsoft’s next-gen platform, Nathan Vella posted on the company’s blog clarifying this was only a timed-exclusive, meaning the game could appear elsewhere after a certain period. Such shackles, limited though they may be, do not seem to jive with most assumed definitions of independence.

Sometimes the rift is pure semiology.

Unless you’re selling something off the back of your truck, someone else is involved, rendering your freedom circumspect. This isn’t necessarily a bad thing. But the conflation of those two definitions, of financial independence and the Indie Spirit, or some other voodoo phraseology that lumps together the growing community of like-minded makers out there, does nothing but confuse consumers and water down what was once a powerful idea.

Each entertainment medium deals with this struggle between artistic integrity, creator independence, and distribution. But sometimes the rift is pure semiology. When you turn on the radio in 1994 and every song is deemed “alternative music,” there has been a rupture in basic syntactical understanding. Years later, rock music recorded in pricy studios was suddenly labeled “garage rock” with nary a tire iron in sight. These words bared little resemblance to what they named; through repetition the meaning shifted, a kind of impromptu market coercion. The same shift threatens the language used to describe the games we play.

Labels are dangerous because they wield such power. But the grip is tenuous; once the definition is questioned, the connection between a word and its associated object grows flimsy. A label can bring down the very thing it names even though it’s just that: a name, something exterior to the actual experience. How wide do we cast our descriptive net? Does the word’s usage, uttered in a press conference or bandied about on a web article, even matter? Such descriptors set expectations. But as the word itself chaffs away into nebulous bits of assumed value, we risk being hoodwinked by those overeager to name themselves something they’re not.

Indie developers themselves are adamant they won’t be bought.

Indie developers themselves are adamant they won’t be bought. “I think players can usually tell when a [game] is a labor of love versus, like, a cynical business initiative,” Greg Kasavin, director at Supergiant, wrote in an email to me. “Independent developers tend to be pretty transparent with their audiences about why they’re making the game they’re making.” Maybe that’s what concerns me the most: That with all the platform holders scrabbling for the smaller, more refined games (such as Supergiant’s own upcoming Transistor), they’ll bring with them the opacity of a corporation, standing between the fans and those laboring with love.

In the end, no words trump what is made. And so we stand up and clap when Sony and Microsoft name-check studios like Dennaton Games and Capybara, producers of some of the young decade’s most provocative titles. We approve of these monoliths taking their eyes off the mainstream and squinting at smaller niches, those asking for fresh perspectives. But I wonder if we shouldn’t hold the applause. It’s hard to make out the melody when awash in all that noise.