“I don’t see it,” were the first words out of my mouth, when my mom took me to see the Mona Lisa at the Louvre when I was eight. After days of hype, I felt betrayed by both the tour guide and my own mother. I was promised history, and all I got was a bunch of butts in my face while I tried to jockey for a glimpse at the postcard-sized magnus opus.

One of the most defining differences between the virtual museum and the real-world one is that pervasive sense of solitude. Instead of jockeying for a moment alone with the artwork, the implication of a virtual space is that it was built for you, the player. Of course, in artwork, the viewer always plays a part in creation. But virtual space comes alive only when the player enters it, as if the artwork had never existed before you. As if it sprouted by way of immaculate conception for you and you alone.

The virtual museum crafted by a student group at SAIC (School of Art Institute of Chicago) evokes isolation with each step. Walking from exhibit to exhibit, your footsteps echo, a diegetic sound that simultaneously grounds and unnerves you. In the real world, appraising artwork becomes a performance, as you stare into this or that famous painting to try to stir up the feelings you’re ‘supposed’ to feel.

each interaction with the artwork is unbearably intimate

In the virtual museum, each interaction with the artwork is unbearably intimate. Featuring an interactive vignette for every exhibit, it takes more than just active participation to appraise it. Despite your isolation as the player, you are thrust into conversation from the very first exhibit onward—both figuratively and literally. On the literal level, the first vignette drops you into a world of colliding cultural symbols. All at once, you are bombarded with everything from Seinfeld’s opening musical number to a tolling church bell. Christ the Redeemer stands high above, while down below an enlarged breast endures your gaze. 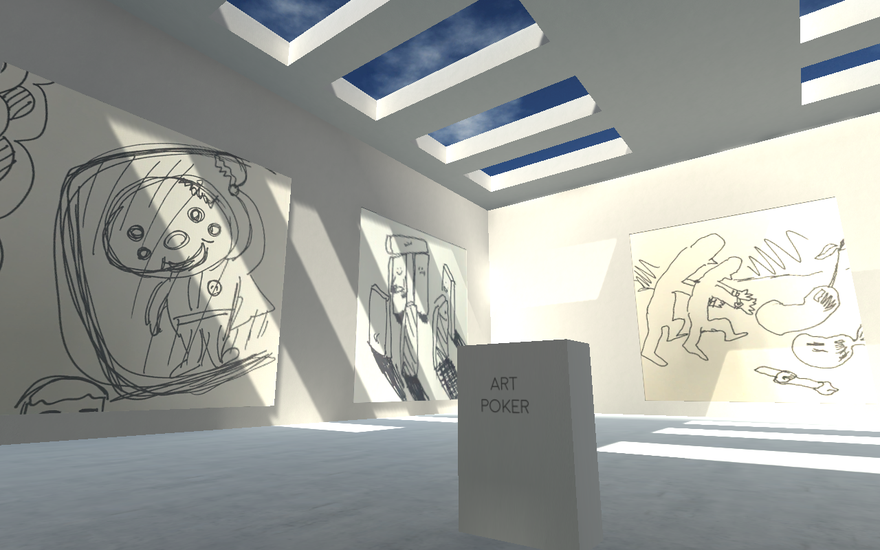 Figuratively, each student-artist is part of a larger, collaborative dialogue. Leaving his or her own mark on the work, the interactive vignettes render you—the player—a mediator between their unique brush strokes. Because you may be the sole visitor, but you quickly learn that this museum is more populated than even the Louvre at pique hours. The exhibits stitch together the sensibilities of each collaborator in an abstract game of telephone pictionary.

The resulting artwork smacks of sporadic individuality, like the freakish pigeon-baby who greets you in one exhibition room. As he dances his twitchy pigeon-baby dance, you catch a glimpse of the idiosyncrasies that make up the human touch—something that has become all too rare in the sterilized, impersonal museum experiences of the real world.

You can experience the museum retrospective exhibition for free on Mac and Windows.