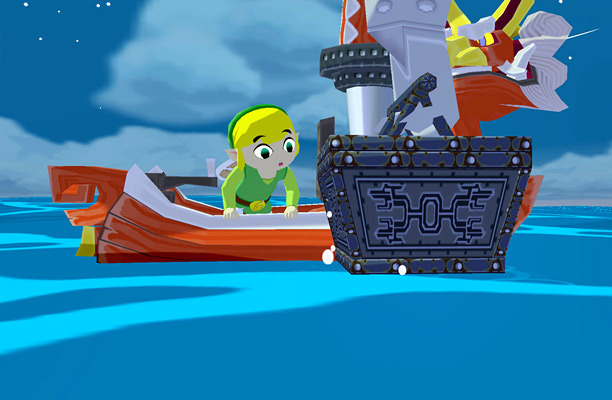 “You got a Tingle Bottle! Using Miiverse, you can insert a message you’ve written, and send it out to sea for someone unknown to receive!”

To whomever finds this bottle and reads the message within, I pray your journey takes you far from here, for where I’ve landed breeds contempt and thoughts more sinful than a pirate’s curses. Only madness awaits.

Apologies for the previous bottle! I was hungry, having found no Chu Chu Jelly for days. My health had dwindled, and with it, my clarity of thought. I’m saner now and wish to share with you my tales from the sea.

I feel I’ve been here before. Yet the sun shines down with a vividness I can’t recall. Familiar faces address me as for the first time and speak in riddles. I can’t hear their words, only read their thoughts, like some clairvoyant. Perhaps their voices were taken by thieves; now they stay in one place, waiting for their captors’ return.

The ocean! What a glory. I ride upon her on a talking boat. Lunacy, you say? This world’s beset with fairy tales far grander than a sailboat spouting advice from the head of a lion. Surely you’ve seen the same amazing things as I: a grown nymph inhabiting a well; a trio of eskimos hunting the deep water for treasure; a dragon atop a mountain’s peak. Rumor points to a sunken city below the waves. I sail on, eyes to the horizon. May the gods bring you swift winds and clear skies.

You’ve chosen poorly. Throw me back and look again…

I jest! Ha. A little bottle humor. Here is my quest: I seek powerful charms, pieces of triangle known for power, courage, and wisdom. My people depend on me. I know not why I’m called on this mission but I feel a great heaviness: the faith of unknown multitudes. Yet I delay my quest time and again.

Other voyagers, passing under these same shifting clouds, sailing these same rolling waters: What have they seen?

For what? The promise of a stranger’s words. Upon every coast I spy a shimmering light, green sparkles winking at me out of the white foam. I can’t not go to them, forestalling any and all responsibility, be it a cloudy volcano or frozen island, instead reaching for these bottles like the one you hold now.

Their mysterious pull concerns me; does my motivation weaken? I can’t help but feel I’ve accomplished my goal. Why do I traverse these same waters again? Ah, but these same messages give the answer. Other voyagers, passing under these same shifting clouds, sailing these same rolling waters: What have they seen? Where have they gone? Somehow these notes fill my own emptiness, unfilled by adventures I know to be mirages of past triumph. These strangers’ words and their sparse, unfinished thoughts provoke in me imagined outcomes, a thousand reasons in a thousand bottles, each an answer to the same question. Here is mine.

To You, Stranger, Friend:

Curiosity has grown into confusion. Often, these bottles reveal the image of their senders, a smiling face in front of certain danger or a captivating vista, as if some cloud-surfing creature held a Pictobox with fishing line and pointed it thusly.

A thousand pointy-eared cherubs in green, none older or younger than my own self.

What concerns me more is that face peering back. It is my own! The sea must have addled my senses. Have I taken these images myself, slinging each bottle into waves, their shifting current reeling them back to me like captured fish? No. But then how to explain my doppelgangers? A thousand pointy-eared cherubs in green, none older or younger than my own self. A sign of fatigue, no more.

But the illusion begs further inquiry: To whom am I tossing these bottled prayers? Do I toss them overboard with the receiver in mind? Or do I write and send out my silly missives, this redundant documentation, for no one but the giver? This is a dangerous admission. Answer me, dear reader, if only to stamp out the heinous thought from scurrying longer.

Greetings from the Void,

I fear you’ll hear from me no longer, for my time on this sea grows short. And still the bottles mount. I open them and espy the same drivel: An off-handed remark sent off into the ether, a place I’ve seen already a dozen times before. Yet I can’t ignore the gleam of curved glass bobbing in the waves; I veer my ship toward cannon-fire and certain doom for but a chance at its retrieval. And for what? A one-sided conversation. Another joke whose punchline remains the fact of this bottle itself, a cruel joke at the finder’s expense, a seed endlessly watered that flowers into forgotten dreams…

The water chaffs at my skin. My mind wanders, bending like refracted light on a rippling tide. My eyes grow large, the memory of bipedal pig ogres with broad swords filling my head with fresh fear. I sail from island to island. I venture into underground lairs with locked doors and circuitous paths. Who built such contrived caverns? Who would live here but the monsters I slaughter. Each explodes in purple smoke, their deaths a series of bright flashes that linger in my vision and then are gone, white-caps before the inevitable crash. I write this not out of grief but boredom. I care not for their mothers or children. All wish to kill me so I kill them first. I want to sail home.

A giant looms. My boat pushes forward under dark skies. I think of my grandmother. A bottle floats alongside the bow, just out of reach. I ignore it. The message scrawled within is my own. Before hitting land I snap a picture of the sky, cerulean blue. Looks like heaven. I hope luck takes me there soon.