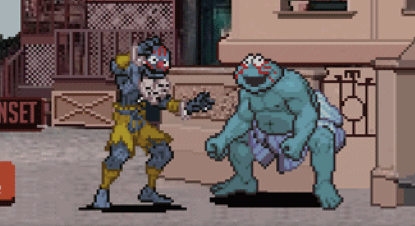 Bert, Ernie, Cookie Monster, Grover, and the rest of the Sesame Street crew could only pretend to be nice for so long. It was only a matter of time before someone snapped and got on some knucklehead New York shit, turning into the set into an all-out brawl. This is what happens when you hold in emotions for too long.

Well, that’s my theory about Sesame Street Fighter anyway. Not that Juan David Gomez needs a justifiable backstory to have the huggable puppets that compose my earliest formative memories beat each other senseless. It’s enough that Grover is a dead-ringer for Dhalsim to make my morning. But give Gomez credit for staying true to the educational spirit of the show: Instead of turning semicircles to throw fireballs, you type out words that appear in bubbles above the character’s heads.

Although the game was available earlier, the site where you can play this nostalgic slam-dunk is currently slammed. I’ll keep hitting refresh until I can play again.