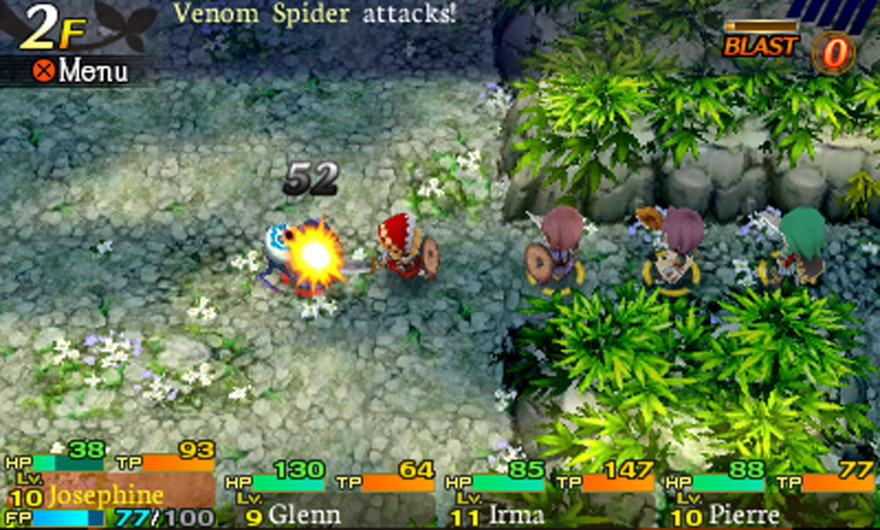 We’re fast arriving at a cultural singularity where anything that can be combined with something else will be. Recent days have seen iPhone chips combined with luxury watches. Kendrick Lamar with George Clinton. Green Lantern with Star Trek. Forza with Fast & Furious. And you can go ahead and throw Etrian Mystery Dungeon on the bonfire. Mashups are sometimes inspirational, serendipitous and even beautiful—take, for instance, these Carly Rae Jepsen and Trent Reznor duets—but just because two things can subsist in relative equilibrium doesn’t mean they should.

As the name suggests, Etrian Mystery Dungeon is the coupling of two role-playing games that are spoken highly of in certain circles. Atlus and Spike Chunsoft, a pair of laureled studios operating out of Tokyo, saw fit to slot together their second-place properties, Mystery Dungeon and Etrian Odyssey. It was a calculated risk. On the glistening surface of your 3DS, this seems like a snug fit, since the two series are not much of a departure from each other, at least at face value. In origin and credo, they are both essentialist JRPGs. They both involve blindly scurrying through humiliating labyrinths with nothing but probability and providence on your side. And they are unabashedly old-school, harking back to the days of Apple IIs and time-sharing mainframes. It sounds like a match made in Shinto heaven, but that’s not how it goes down.

You would expect the infusion to be pulled off without a glitch. After all, the Mystery Dungeon series has already crossed over with Final Fantasy, Pokémon, and Dragon’s Quest. But you would be wrong. As we know from any of Wiley’s excursions into mainstream pop, not every star-studded mishmash is golden. The obvious problem is that the series this game culls its inspiration from are finicky in their own ways. Etrian Odyssey is profuse with menus, and the method of control in Mystery Dungeon demands retraining your hands as claws. On their own, each is manageable, but when you combine them, the result is a usability nightmare. It makes the near-fatal mistake of assuming that you want to play it more badly than you probably actually do—that you will bend over backwards to peel through the layers of its ever-changing dungeon, just so the boss on the bottom floor can stomp you. It’s the videogame equivalent of the guy you just met asking you to help him move. At this juncture the friendship is probably not worth hauling a living room set down three flights of stairs.

Good games could ultimately overcome these obfuscations, but Etrian Mystery Dungeon does not, and it has everything to do with ill-matched source materials. It tries to accommodate both, but does justice to neither. Etrian Odyssey calls back to the graph paper cartography of Wizardry, while Mystery Dungeon’s family tree is drawn in ASCII, having a reserved seat in the great hall of roguelikes. (True, the series has been watered down over the years, but Mystery Dungeon: Shiren the Wanderer, from 1995, with its fiendish unpredictability and its rice-ball-eating hero, is often cited as one of the subgenre’s finest.) But what I’ve come to realize is that, like the children I will eventually have, I love these two games equally, but for equally different reasons.

It tries to accommodate both, but does justice to neither.

The reason people celebrate rougelikes, like Mystery Dungeon, is for emergent behavior—the capacity for a game to generate unexpected events from a few simple rules. In roguelikes these simple rules are often things that people who don’t understand roguelikes complain about. You lose all your progress when you die. And they’re random, so they’ll sometimes screw you over with unavoidable situations you can’t win. But in a quality roguelike these elements also clash in ways that are brilliant, like flint against stone, as we see in designer Tom Francis’s account of a very amusing Spelunky playthrough, in which an enemy tribesman stole a boomerang from the shopkeeper in the black market, and pandemonium ensued.

The reason people appreciate a terse old-school RPG like Etrian Odyssey, alternatively, is for something like fastidiousness, for clinging to cold hard numbers as if your life depended on it—because in the game, it does. These games are about salivating as a bar slowly ticks towards level 99, and investing points into skill trees as carefully as you’d invest money in the stock market, and gathering forest herbs to sell to the shopkeep so you can upgrade your weapons, your armor, your shoes. And you do this in the name of progress, so you can have a slight chance against the enemies on the floor below.

But progress is the antithesis of chaos, unless you’re Friedrich Nietzsche. So when they are yoked at the hip, as they are in Etrian Mystery Dungeon, they tend to cancel one another out, instead of working in a game’s favor. In a stone-cold RPG like Etrian Odyssey you want to minimize the crazy shit happening, but in a Mystery Dungeon you want to revel in it, like a surfer in search of the biggest wave. You would hope in spite of this the game would manage to branch off and do its own thing, but it doesn’t, unless that thing is needless complexity, endless grinding and conscripting dreary-eyed anime children on a plodding adventure.