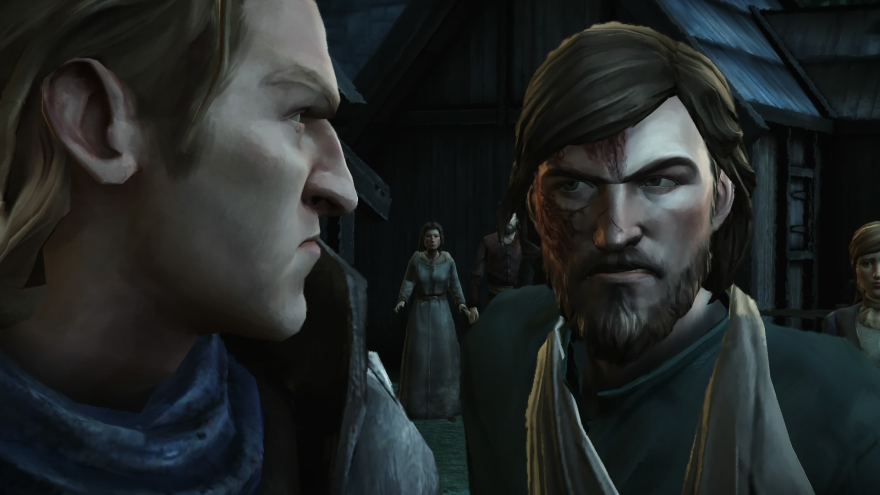 Title:
Episode 3 - The Sword in the Darkness

“You read that certain kind of fiction where the guy will always get the girl and the good guys win and it reaffirms to you that life is fair. We all want that at times. There’s a certain vicarious release to that. So I’m not dismissive of people who want that. But that’s not the kind of fiction I write, in most cases. It’s certainly not what Ice and Fire is. It tries to be more realistic about what life is. It has joy, but it also has pain and fear. I think the best fiction captures life in all its light and darkness.” – George RR Martin

Lately, it feels like a lot of our popular entertainment presumes we enjoy partaking in pseudo sadomasochistic relationships with them. And they’re not wrong. Generally, our answers to things like The Walking Dead (the show and game), Games of Thrones (the show and game), The Leftovers, True Detective, and Breaking Bad has been a resounding: yes, sir, can I have another. But after The Sword in the Darkness, the third episode of Telltale’s Game of Thrones adaptation, I’m starting to get sick of submitting to the pain I’m supposed to be enjoying. I’m fine with the emotional masochism of watching beloved characters suffer week after week—after all, that’s the main draw of these acclaimed shows. But the submission in Telltale’s GoT now feels less like a thrill and more like routine.

The torture Telltale’s Game of Thrones expects you to withstand is fundamentally different to the show’s. Sure, HBO rough up its audience (RIP Ned Stark II). But, occasionally, it’ll also add some pleasure into the mix, like Dany’s mic-drop invasion of Slavers Bay (coincidentally evoked in Sword in the Darkness’ title card). Telltale, on the other hand, feels like a perpetual parade of humiliation, where you’re forced to kiss rings and/or kiss more ass than an overactive corgi at the dog park. What kind of pseudo sadomasochistic relationship doesn’t at least offer to let you dominate every once in a while to switch things up?

Usually, I enjoy being put between a rock and a hard place by my entertainment media, and Telltale is one of the best at it. But the monotony of the dynamic—of seeing the world through the lens of a family that just cannot catch a break—has been beaten into the ground more times than poor Rodrik. No matter how many times you squeal the safety word to the Whitehills, they continue to treat you like scum they’d barely consider wiping their asses with. It’s been that way ever since Ramsay Snow made sure you understood how worthless you and your House were at the end of the very first episode.

beaten into the ground more times than poor Rodrik

Since that successful moment, Telltale seems to believe dragging you further through the mud (literally) will continue to be an enthralling experience. But how much more humiliation could they even have hidden up their sleeve after gut-punching a crippled Rodrik while he was already writhing on the ground and screaming uncle? That kind of “win nothing, lose at everything” tone might’ve worked for Walking Dead. But the game of thrones is about gaining everything and losing everything in one fell swoop.  And continuing to force players to just lose everything throughout the entire first half of the season is not only safe, but also uninventive storytelling. Just like the Walking Dead nowadays (the show and game).

Keep in mind that I neither expect nor desire my videogame experiences to be nothing but power trips. I thoroughly enjoyed the first two episodes of this season. And one of the smartest moves Telltale made was to differentiate themselves from both the books and the show by casting players as more of a pawn than a main player in the game of thrones.

But something changed in this episode. Often, it seemed like Telltale forgot how to tell its own version of the story, and, worse still, started using mild thrills from the show as a crutch. In theory, a backseat view of the Purple Wedding might’ve been a cool thought. As our friend the coal boy says,  the Westerosi elite hardly ever take notice of what they let slip around base born plebs. There’s a range of possibilities in what one might hear as a serving-class member attending this murder-mystery wedding. But in actuality (or just the way Telltale executed it), backseat passes to the Royal wedding did a remarkable job of turning an exciting moment into a dull one.

But perhaps nothing fell flatter than the supposed climax of the entire episode: the introduction to Dany on the outskirts of Meereen. After being maimed and nearly killed by Drogon, Dany decides it’s a good idea to address these accusations with the ominous warning that, “if you presume to speak of my dragons, chose your words carefully.” Why in the world would Daenerys Targaryen approach you with such tactless hostility when you’re bringing vital information about her child, which could also potentially ruin her reputation. The answer, of course, is that Telltale needed a finale, and thought her fan-favorite status might get you in the mood to submit some more. It didn’t. Instead, it felt like my favorite character had been rendered a puppet of Telltale’s bidding.

Listen, I understand seeing actors from the TV show in a new context is a huge selling point for this videogame. And usually, they’ve utilized the established characters in interesting ways, like Cersei’s terrifying roast of everything you are in episode one. But, when it comes to choosing the major beats of an episode, Telltale might learn to trust their own ability to tell a compelling narrative more and piggyback off the show less. Because I can rewatch season four and have front row seats to the Purple wedding anytime I want. Why in the name of the seven gods would I ever choose to stare at everyone’s backs while listening to Margaery’s handmaids gossip instead?

The best storytelling in this episode (and arguably the season) comes exclusively from original Telltale characters. Surprisingly, Gared’s perspective continues to be one of the most affecting and exciting. The shot of the Weirwood Tree during the vow ceremony elicited an audible sigh from me, allowing for an intimate moment with one of the series’ most iconic symbols—in a way neither the books nor the show could ever do. I loved the risk Telltale took by including a never-before-used rhythm interaction, allowing the player to pace each line of Gared’s vows. It probably confused some, but I started imbuing all sorts of meaning, as the pauses and tempo gave a different emotional subtext to each line.

To immediately follow that up with a scene that dangles the intrigue of the North Grove (a secret lair of undoubted Forrester awesomeness hidden beyond the wall) like a forbidden fruit is exactly the kind of thing I hope there’ll be more of in the future. After the poignant vow ceremony, I found myself pushed and pulled to break or keep my vows, which is what Telltale does best of course. I certainly don’t need Jon Snow’s pouty dead fish face to care about what’s happening at The Wall. I’d be happy with him brooding on his own time, with his own actual human face.

Telltale can and has done great things for the Game of Thrones fiction. But scope is what propelled this fictional world into the cultural phenomenon it it is today. If the games hope to be considered worthy additions to the phenomenon, they’ll need to take advantage of that vast world, and all its opportunities for original storytelling. While also remembering that we’d like to see a bit more than the bottom of a Whitehill’s shoe.