In H. Rider Haggard’s 1887 adventure novel She, the entrance into true wilderness is marked by a spectacle both natural and preposterous: a crocodile and a lion fighting each other to the death. As the adventurers Horace Holly and Leo Vincey make their way into the center of Africa, they see the fight from their riverboat—the animals “struggling hideously,” tearing at each other with tooth and claw:

Then, all of a sudden, the end came. The lion’s head fell forward on the crocodile’s back, and with an awful groan he died, and the crocodile, after standing for a minute motionless, slowly rolled over on to his side, his jaws still fixed across the carcase of the lion, which, we afterwards found, he had bitten almost in halves.

Boot up Ubisoft’s Far Cry 4 and the first thing you’ll see—after a litany of logos for the developer, the engine, and Nvidia—is something that feels like a digital reincarnation of Haggard’s vision. Tiger and elephant leap at each other in primal combat: offense and defense, orange and blue, with all the vibrancy of mascots and all the gravity of constellations. As they clash, they dissolve into mist.

Videogames love the Victorian era, but they tend to love it mostly as an aesthetic: steam, industrialism, mutton chops, dead prostitutes, fainting couches. Few are the games that actually feel like latter-day artifacts of Victorian culture, but Far Cry 4 is one of them—especially as it descends into straight-up King Solomon’s Mines territory with its new DLC, Valley of the Yetis. The narrative is a journey into the deep interior of a savage land: the center of the earth in Jules Verne; the “lost world” in Arthur Conan Doyle; here, an uncharted region of the Himalayas. In his quest to make sense of the place—because he, as always, is the level-headed exemplar of Western reason—the hero is beset by the psychotic disciples of an ancient cult, who seek to protect a legendary artifact that grants immortality. He is also, crucially, beset by animals: heightened, hyper-predatory animals that embody the destructive potential of a “wild” untouched by the taming hand of the West. The Yeti is the biggest and baddest one.

A “wild” untouched by the taming hand of the West.

Almost nothing is different or interesting about Valley of the Yetis; it’s basically another solid, dependable chunk of Far Cry, from the outpost battles to the reliance on hallucinogens as an aesthetic weirdness delivery system. But it’s notable nonetheless for the clarity of its genre influences, which force us to take a clear, hard look at where the animals in our open-world games come from, and why hunting them has become such an important thing to do.

In the 90s, hunting was a videogame genre unto itself; it was the whole point of sims like the long-running Deer Hunter series and SEGA’s absurd Jambo! Safari, relics of a lost time of great simplicity that can still be found in the corners of old arcades and the bargain bin at Micro Center. Now it’s become a key ingredient of the open-world action-adventure game, a genre that—like the novel—likes to consume other genres in its quest to simulate reality, or at least totality. In Metal Gear Solid 3, the necessity of hunger was the pretext for the freedom to hunt at will; you had to kill animals because you had to eat something, even if it was a parrot. In games like Far Cry, Red Dead Redemption, Assassin’s Creed, and even Grand Theft Auto V, hunting is a lot less essential from a narrative point of view: the animal is the peripheral world-builder, thrown onto the map to make it feel uncharted. Hunting is always a sidequest. And yet, in a lot of ways, it’s more conceptually essential than ever before. These are games that articulate freedom itself as the ability to chase down and kill whomever or whatever you want. And then skin it. 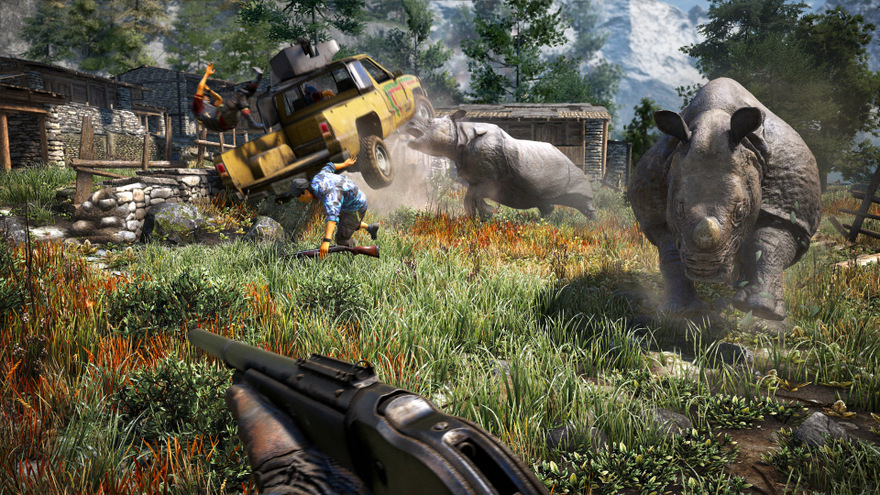 Far Cry 4 contains the most refined version yet of the hunting-skinning-crafting gameplay loop that has appeared in almost every big open-world game set in a natural environment since Red Dead. You see a Malayan tapir, or a Bengal tiger, or a honey badger. Maybe it attacks you, in which case you swing at it wildly with a machete while it bites and slashes at you with rabid fury. Or maybe you attack it, with a grenade or a sniper rifle or—if you’re really dedicated—a bow, which allows you to perform a “clean kill” for double the amount of skins. What happens next has become, at this point, a ubiquitous trope of the genre: the player bends down, plunges his knife into the creature’s limp frame, and slashes. Blood spatters on the camera. In Far Cry 3 and 4, the slash is immediately followed by the extraction of a nondescript lump of flesh; in Red Dead and the Assassin’s Creed games, it’s followed by a tasteful fade to black. The animal, once harvested, eventually disappears.

As in Far Cry 3, what incentivizes the demise of these creatures within the game’s twisted economy—in which, among other things, the player can sell “Shangri-Lagers,” opium pipes, and Maxi pads—is that they are the sole source of valuable upgrades for items that contain other items: three Tibetan wolf pelts can make a new weapon holster; two Asian rhino skins allow you to hold more C4; three yak skins make a better bait bag, which you can use to lure more valuable prey to make a new quiver or a container for flamethrower fuel. This time, the hunts for “legendary” animals, which produce the best upgrades, are routed through a fashion designer named Mumu Chiffon who is in every way the prototypical Far Cry or Grand Theft Auto or Borderlands character: flamboyantly fucked up in a way that feels focus-grouped, and therefore benign. “I will send you to find me raw and exotic materials,” he says, as he flails his arms and measures the player’s body. “And I will use them to accentuate your raw and primal nature…”

In some ways, hunting animals for their skins in Far Cry is just like killing people for experience points: a mechanic borrowed from RPGs that grafts progression and intention onto what might otherwise have felt like meaningless slaughter. But it’s also clear that the game has ideas about hunting and skinning—that it’s trying to recreate something deeper, more essential, than self-interested exploitation. Last fall, an older student of mine asked me if he could write about an object that had lived in his apartment for over a decade: a wolf pelt, draped over his desk chair, that his friend had given to him as a “sign of brotherhood.” Apparently his friend tracked and killed the wolf in Alaska; he killed it in one shot, with a bow, from a short enough distance to see the whites in its eyes. In my student’s view, the wolf pelt embodied the closest thing animals get to life after death: it lived on by reminding him continually of a relationship with “nature” that neither he nor, for that matter, his friend could ever have. To him, the pelt was a memento not of the dead animal but of a dead relationship with the animal: a relationship of reciprocal predation—fierce tiger vs. noble elephant—and mutual respect.

Far Cry aims to simulate something like that encounter and something like that relationship, embodied in and through the skinning process. Crucial to the game’s “going native” narrative, which is about progression as well as degeneration, is that it allows the player to experience animals before (or more accurately, as) they become commodities. They can become leather, but only after you take the steps to make them leather. You can’t just buy leather at the vending machine. Obviously there are limits, compromises, mostly due to the nature of games as an abstracting medium: what happens between the knife plunging into fur and the UI prompt that says you obtained “Bengal tiger skin” is condensed to the point of invisibility, and the strange interchangeability of these animal-based items—why is a quiver made from clouded leopards smaller than a quiver made from honey badgers? Why do they all look the same?—deflates the specificity of the encounters that are supposed to produce them. After a while, and especially if you go after these upgrades as soon as possible, the game’s version of hunting doesn’t feel very primitive at all; it feels like going to the Container Store.

But these are still encounters with the animal, the wild animal, in a world where encounters with the animal matter. John Berger’s famous essay “Why Look at Animals?” imagines the primeval past before industrial capitalism rendered animals “absolutely marginalized”: when they lived alongside man, in parallel. They were hunted and used, but also regarded as vessels of the world’s mysteries—“subjected and worshipped, bred and sacrificed.” To encounter them was to become self-conscious—even more simply, to become a self—because they offered the raw materials for objects as well as the raw materials for symbolic thought. Something like totemism governs the world of Far Cry. In Far Cry 3, every ability you get, every new way to kill people predatorily, is identified with a creature (the Heron, the Shark, or the Spider) and inscribed in mystic tattoos upon the flesh. In Far Cry 4, the tiger and elephant that begin every player’s journey are also the animals that define that journey: abilities are earned under the sign of either one, with the tiger bestowing deadliness and the elephant bestowing fortitude. The branching paths of the campaign, which force you to choose to help either the offense-minded Amita or the more cautious Sabal, enact the elemental conflict in a larger and subtler way. In Valley of the Yetis, to kill the Yeti—and take its heart, because it’s so sacred it can’t be skinned—is to kill the totem of a tribe.

For Berger, the point of transition is the 19th century: the 19th century is when we lose animals, for all intents and purposes, replacing them with cheap simulacra of themselves—cartoons, pets, zoo animals with their deadened stares—that are merely reflections of us. At that point of transition we find someone like Haggard, writing his way into the wilderness with a kind of deliberate abandon, and probably for all the wrong reasons. As John Miller has pointed out in Empire and the Animal Body, the exotic virtual fauna that live and die in Victorian adventure fiction, like the big game actually killed en masse in colonial territories, were viewed as a kind of antidote for “a segregation of humanity from wild non-humanity construed by some to have sapped the nation’s strength.” Victorian men, “enervated” by “the drawing rooms and theatres of civilization,” could be “rejuvenated” by killing animals in the jungles of India—or, less effectively, by reading books about killing animals in the jungles of India. Perhaps the most disturbing thing about Far Cry is that it recreates this process and makes it interactive. To kill a tiger and skin it is to become whole in a way that home no longer allows.

Still, what Berger suggests—and what my student picked up on—is that this “enervation” the Victorians felt, this enervation we continue to feel, need not be conceived in such reductive and ideological terms, as a crisis of masculinity. It was and is a tiredness of the soul, which tales about fierce tigers, noble elephants, and mythic Yetis could salve—like ointment on skin—but never solve. Even a game as routinely masculinist as Far Cry understands that whatever joy or excitement you get out of encountering its virtual animals derives from the near-unthinkable distance of animality as such: unframed, uncolonized by human effort or imagination, ready to be plopped into a rhino-skin bag.