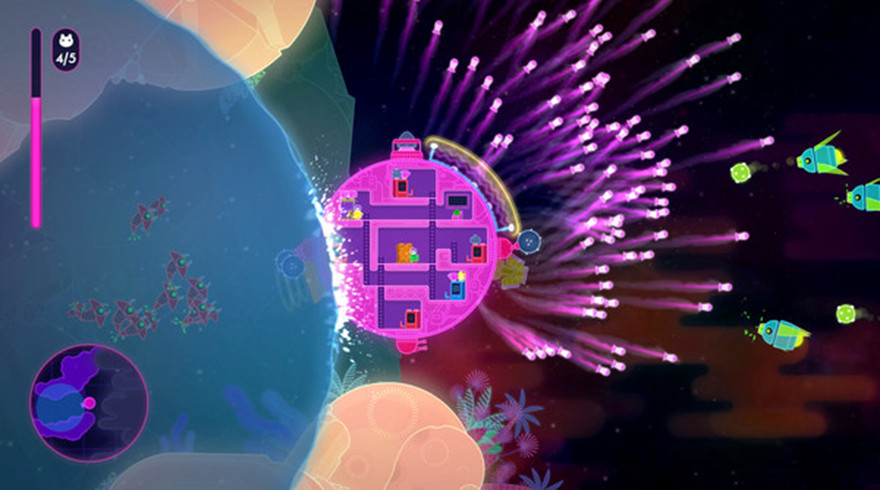 Title:
Lovers in a Dangerous Spacetime

In Lovers in a Dangerous Spacetime, love is all you need to save the universe. So long, that is, that by “love” you mean a second person in the same room more inclined to laugh than cry in the face of adorably designed, brightly colored failure. Armed with such a companion, you may beat back the forces of anti-love and rescue the citizens of an amorous empire. On your own, well, you’re kind of on your own. (The game can be played as a single player directing a semi-autonomous but probably not-autonomous-enough computer controlled second character, but I wouldn’t particularly recommend it.)

Many stories describe love as a force of nature, but Lovers in a Dangerous Spacetime begins by turning this cliché into a literal fact. Powered by love, the Ardor Reactor has provided the energy to build an interstellar civilization protected by the League of Very Empathetic Rescue Spacenauts. (LoVERS, natch.) An engineering failure, however, has led to the destruction of the universe’s primary Ardor Reactor, and the release of the forces of Anti-Love.

These forces, malevolent space beasts and terrible machines, are perhaps more reminiscent of Star Trek’s mirror universe or the Anti-Monitor from the DC Comics multiverse rather than, say, the more mundane but no less dangerous anti-electricity that might be found in an antimatter universe, but maybe it’s better not to quibble over such details. After all, once Lovers in a Dangerous Spacetime has dispensed with its basic premise, it is more or less left to the side in favor of a purer sort of play, which is probably for the best.

Flying and defending the League’s one remaining ship is designed to be just slightly more than you and your companion can handle. The Gumball Zero has eight separate control stations, each of which directs exactly one of the ship’s functions. If you think of the ship as a circular compass rose, there are gun turrets at north, south, east, and west, a rotating super-canon at northwest, a map station at northeast, a partial directional shield at southeast, and engine control in the dead center. This results not so much in intentional awkwardness as the dire and hilarious urgency of an understaffed Rube Goldberg machine.

If you’ve ever wanted to know what it was like to be inside one of those films where the Three Stooges run back and forth adjusting valves to keep some sort of oversized steam-driven contraption from exploding, wonder no longer. Except, of course, there are only two of you.

And quite unlike The Three Stooges, saving the universe in the Gumball Zero is difficult, but not impossible. Failure is likely, but it’s never a foregone conclusion. There’s certainly a sense of panic when you and your companion are attacked from every direction and have to decide which two guns to shoot or whether it would be better for one of you to try to use the shield instead or just to turn on the engine and get out of there entirely. If you’re playing with the right person, this all ends with laughter and high fives. If not, well, at least you know how the Stooges felt.

If you’re playing with the right person, this all ends with laughter and high fives

If you’re ever in danger of mastering the Gumball Zero, there are other ships to be unlocked. One rotates as the engine pushes it through space, meaning that your north-facing turret is no longer pointed at that space bug on your north side and you have to run upside-down to a different station to shoot at it. Another ship locks you and your companion into different sides of the ship, either as an opportunity to emphasize personal responsibility over cooperation or to make it all the more important that you and your companion are talking to each other in the real world.

And this, in the end, is I think where Lovers in a Dangerous Spacetime’s real meditation on the nature of love can be found. Beyond the initial cleverness, there’s not much of a statement in the literal treatment of love as an elemental force of nature. Gravity and electromagnetism are absolutely impersonal things, binding us or destroying us as physical objects, but not as social beings. An interstellar empire built on love rather than conquest or economic scarcity is a refreshing idea, but probably better in Lovers in a Dangerous Spacetime for being declared rather than deeply explored.

Lovers in a Dangerous Spacetime may or may not be a great game to play on a date. (Is there even such a thing? Shouldn’t there be?) It definitely isn’t sexy, and it doesn’t have anything to say at all about love as a thing you feel. It is a fantastic engine, however, to enact love as a thing that you do.