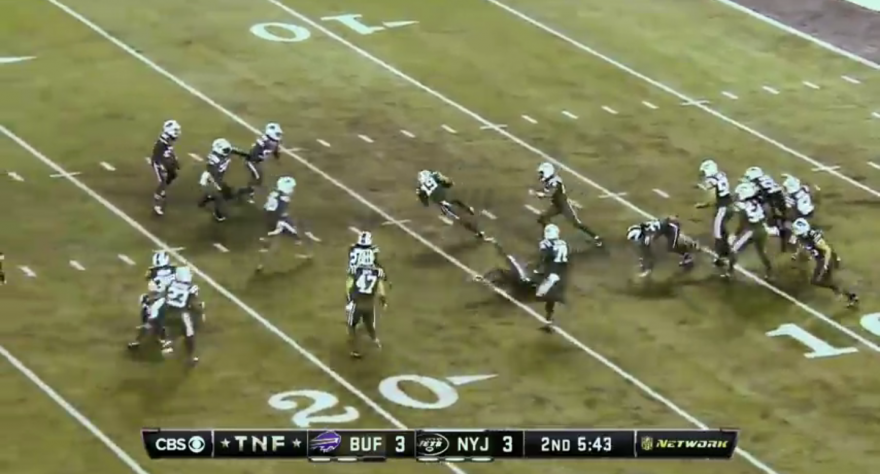 One might reasonably suspect that the NFL’s Buffalo Bills and New York Jets (which fans reliably inform me is spelled J-E-T-S) are fundamentally interchangeable, but last Thursday the league took this theory a bit too far.

The Jets played in their customary green while the Bills wore red—or, as colorblind viewers saw it, both teams wore indistinguishable shades. To those suffering from red-green colorblindness, a population the National Eye Institute estimates as “8 percent of men and 0.5 percent of women with Northern European ancestry,” the whole thing was a vision in brown. If you are not red-green colorblind, Deadspin has helpfully modified footage of the game to reproduce the experience. It’s not pretty.

[Insert a joke about color commentators having been faded for years here.]

But this is the real world, you say, where things are messy and messed up all of the time. This would never happen in a videogame.

The red-green colorblindness simulation Deadspin ran on the NFL footage has actually been performed on videogames on multiple occasions, and the results haven’t been pretty. In a Kotaku essay last year, Cameron Gidari documented his decade of playing games colorblind with gifs contrasting his experience and the intended of experience of the games in question. In hindsight, the following passage would have been instructive for the NFL: “If I’m playing FIFA online I need to pay extra attention to the uniform my opponent picks in case it’s a shade too similar to my own.”

I decided it’d be interesting to make a CLUT to emulate colour blindness, so people could empathise with his play experience. So I played around for a few hours, before realising that smarter people than I had already dealt with this problem.

I discovered Daltonisation, and found the colour transforms for all the standard forms of colour deficiency, and simply applied them to CLUTs to test out. We had enough colour blind people on the team that we could actually see if they worked. Once you’ve got a CLUT in place, making the game accessible to color blind people is pretty easy.

Once colorblindness is recognized as a problem in videogames the next step is to do something about it. This is the idea behind the color-matching game Specimen. Ostensibly a test of your perception, the game’s developer, Erica Gorochow told The Escapist, “anecdotally, we’ve found that you can definitely improve (your perception).” A good deal more improvement, however, will be needed before the jersey combination from the Bills-Jets game passes muster.