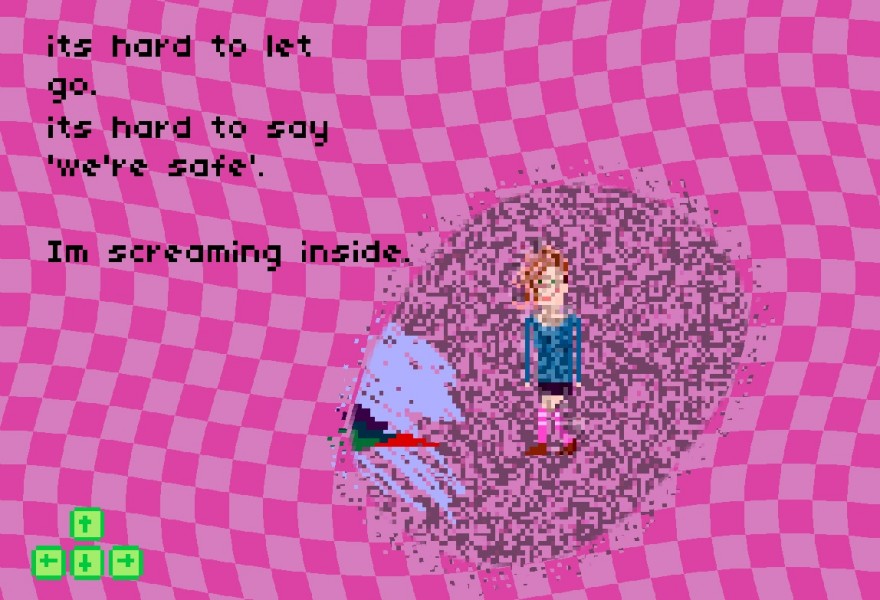 Have you ever felt your head is about to burst?

We’re surrounded by more information than we know what to do with. It can feel like we’re being attacked. How do we cope?

Arielle Grimes may have found a way. She created What Now?, which she describes as “interactive digital expressionist game/art piece”. Interactive it may be, but you’ll quickly discover that enacting even the simplest of motions in this self-contained world can become very unpleasant. You play as Arielle and can walk around an abstract space at your leisure, happening across objects from her everyday life: a bed, a mirror, a mess on the floor, a computer desk, a toy sword that Arielle carried around for a few weeks to “feel safe, after a really upsetting party.”

It’s overwhelming, chaotic, and is, itself, a sensory overload

None of your discoveries contain any joy. Instead, these objects conjure up bad memories and day-to-day conflicts that Arielle has to deal with. Finding the mirror has her reveal that constantly staring into it has led people to believe she was vain, but in fact, she was trying to work out who was staring back at her, and she’s still not sure.

Before reading on, it’s best you play What Now? first, as it’s a sensory experience with a surprise, which is used to convey its message, as will be discussed below. Be warned that it contains loud repetitive noises and comes with a seizure warning, and it also makes reference to PTSD, depression, and social anxiety.

Your experience with What Now? will vary depending on how fast you move. If you rush around, the vibrant noise of the pulsating glitch art will overtake the screen in seconds. It’s overwhelming, chaotic, and is, itself, a sensory overload and representative of the real-life equivalent.

“The breakdown/meltdown comes when you do not heed the signs, and take in too much at once, and all the information and emotions overload the player character and take over the game itself,” Arielle told IndieGames.com.

It probably won’t be long until you opt to quit out, ending your suffering. Escaping from that attack is a privilege you have as a player, but not one that you have in life—at least, not without dire consequence.

If you take it slower, you’ll be able to absorb the sight of all of Arielle’s objects with her monologue alongside them. This allows you to build up an idea of what might lead Arielle to the wall of noise you experienced before. For Arielle, What Now? is in some way cathartic; as she explained to IndieGames.com, it is “a way to cope with [her] day-to-day experiences, and to ignite an emotional reaction in others.”

What Now? can be downloaded directly from this link. You can support Arielle through Patreon, where she also offers other creations as incentives for funding.