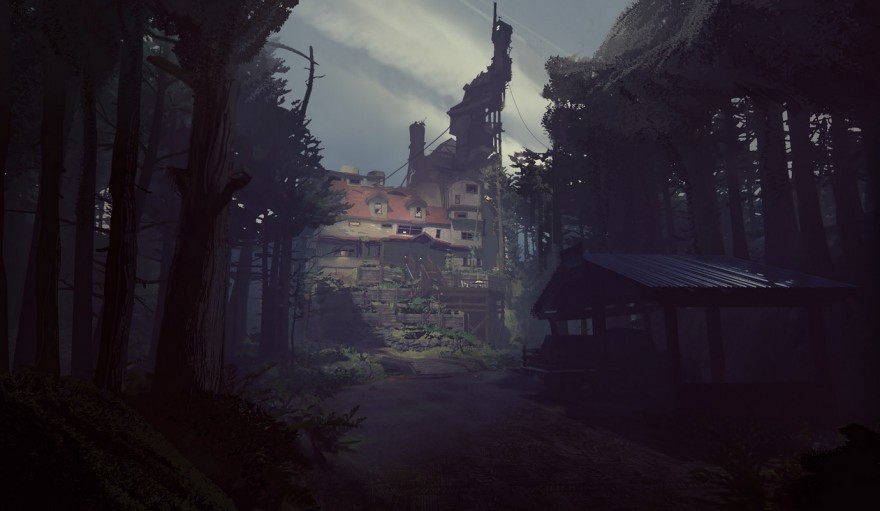 What kind of person has shark wallpaper in their bedroom? No, really, I’m asking. Who do you suppose would willingly invite the image of human terror into the place where they intend to sleep? The same wallpaper has a shipwreck depicted upon it too. So you can’t try to pass off its theme as the beauty of the ocean. Nah, this wallpaper is about death and decay in the deep blue. Who on Earth wants that in their dreams? I want to meet them.

layers and layers of lunacy

This line of questioning is one of many that has been popping off in my brain after scanning the first screenshots from Giant Sparrow’s What Remains of Edith Finch. These are questions that Giant Sparrow has clearly meant to encourage when providing this first look into the Finch family’s hand-me-down home. It is, after all, to be a videogame about exploring the personalities that once played, ate, and slept inside the mansion’s many rooms. We play as Edith Finch and hope to find out why she is the only one of her namesake left alive.

It’s a household that Giant Sparrow’s creative director Ian Dallas describes as “crazy.” Not only that, but he goes on to imply that it is comprised of layers and layers of lunacy, as if it were a deranged onion. It has housed generations of the Finch family who, if Dallas’s words are anything to go by, make the Addams Family look like the Brady Bunch. And while we don’t get to meet these characters face-to-face, we can see how their personalities have shaped and filled this house over the years.

An invitation like this, into a home fashioned by “a range of eccentric, stubborn people”, is one that I don’t need to be offered twice. I snap it up. Having recently finished a reading of Mervyn Peake’s Gormenghast trilogy and immediately missing the vast gothic castle made of crooked and dilapidated stonescapes at its center, I’m gorging on the opportunity for another tale just like it. One of the many engrossing features of Gormenghast is seeing how the the peculiar Groan family form relationships with the labyrinthine masonry that they are forced to occupy from birth. They and their many subjects survive by carving out their own spaces inside a hive of meticulous routines, and this has been going on for centuries, with generations of Groans leaving their marks all over.

the walls of this place have much to say.

What Remains of Edith Finch seems similar to Gormenghast, at least in narrative terms, as it focuses on what the finer details of a home’s architecture and inner dwellings reveals about those that live inside it. This much is communicated in the game’s new trailer titled “House Introduction.” It shows only the barest interiors of the house, contours really, of staircases and wall décor, upon which is projected clips from the stories that we’ll experience first-hand in finding out each family member’s fate. The trailer is but a glimpse, but it does get across the idea that the walls of this place have much to say.

This is why I have all of these unanswered questions. It’s why I’m staring but inches away from my monitor trying to observe the debris of each room in the Finch house. I’m desperate to know more about these characters and seek it out in the possessions they’ve left in their wake. Due to this, I can tell you that most of the screenshots show spaces defined by their grandma-chic. Floral lampshades and armchairs, a patterned rug, old china crockery and a cookbook opened up on the cake-baking section. These all seem to be how the Finch family aim to present themselves to visitors as this style of decoration inhabits the entrance hall, the kitchen, and what is probably a library.

Move beyond these first areas and into the bedrooms, however, and you find a range of different tastes. The shark wallpaper is part of one of those. And, unfortunately, that’s all we really get to see of the more private faces of the house for now. Other screenshots only draw upon my craving for more Gormenghast by showing the mansion’s exterior. There’s a gnarled tree whose branches coil towards the moon like dead fingers while the house sits in the background with the menace of Dracula’s castle. There’s also a closer shot that reveals a clunky, crooked tower built of small parts that stretches out from the main house towards the sky, looking like a giraffe’s neck after it has been mangled by a lion’s teeth. My guess is that this was the work of one Finch who wanted to get away from the rest, building upwards out of their way. It has the look of a mad scientist’s retreat, don’t you think?

Get a look at some of the screenshots below. For the rest of them head over to the PlayStation blog. What Remains of Edith Finch is coming exclusively to PlayStation 4 in 2016.