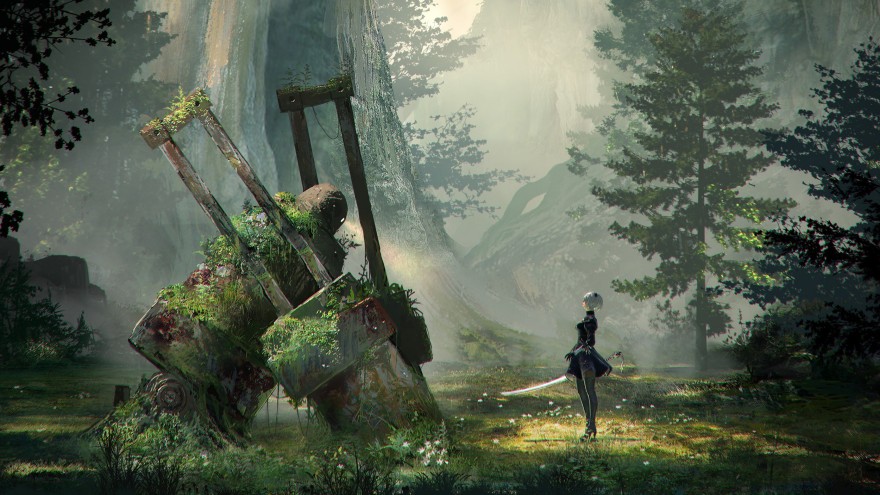 [This article contains spoilers for NieR and Drakengard]

The reveal of NieR: Automata‘s full title and the first proper story details this week was significant for two reasons: 1) Holy shit, more NieR, and this time it’s about machines?!, and 2) We discovered it’s based on a Japanese stage play called “YoRHa” that was also penned by the game’s writer and director Taro Yoko.

Before getting into this stage play and what it means for NieR: Automata, it’s worth remembering the previous work of Yoko as it will be instrumental in understanding where he might be going with NieR: Automata‘s story.

parallels the survival mentality seen in the tech industries

First off, the man is one of the few directors in videogames who despises the medium’s focus on violence and murder. When coming up with his first game as director, Drakengard, back in the early 2000s, he looked at the prevalence of games at the time that glorified killing. He thought you’d have to be “insane” to think that killing should ever be pleasurable. That’s why, with Drakengard, he justifies the mass murder committed by the protagonist and his army by depicting them as a “twisted organization where everyone’s wrong and unjust.” Indeed, Drakengard features a supressed pedophile, a cannibal who eats children, incestual love between two of the main characters, as well as suicide and the discussion of child abuse.

NieR, released in 2010, is a spin-off from the Drakengard series that Yoko has said was influenced by 9/11 and the War on Terror. After these turn-of-the-century events, the vibe that Yoko was getting from society was “you don’t have to be insane to kill someone. You just have to think you’re right.” NieR was a reflection of this thinking. With it, he explored how two opposing perspectives out to kill each other might justify their actions, not necessarily giving preference to either of them.

As such, in NieR you follow a man (called Nier) as he slays beasts known as Shades in order to find a cure for his daughter who has a terminal disease. His reason for killing is to protect his daughter. But by the end of the game you discover that these Shades are actually the spirits of humans who previously separated them from their bodies in order to avoid extinction by the same disease. The idea was to unite the spirits with the clones they had created of their bodies (which were resistant to the disease) once the illness had died out.

Got all that? Okay, good. Now, on a second playthrough of NieR, you gain the ability to hear what the Shades you fight throughout the game are saying. There are also new cutscenes that depict the Shades as people trying to defend their loved ones from Nier’s onslaught. Turns out their reason for killing isn’t so different to Nier’s then, huh? These kinds of revelations is what Yoko’s games are all about. It’s his way of getting us to engage with discourse around morality, war, and violence in the real world through his work (it’s probably not too surprising that he never intended to get involved with videogames in the first place). People often say his games are dark, but Yoko only sees himself as reflecting the world, and seems to suggest that it’s the light treatment and expectation of violence in videogames that is truly dark.

That’s the recap over for now. Try to let all that sink in. Right then, the question that arises with NieR: Automata is what Yoko sees in the world now and how he has let this mold the game’s story. What’s the discourse he’s going to have us thinking about this time? The significance of the stage play that Automata has connections to is that it gives us insight into the answer (huge thanks to Nier2.com’s detailed summary of the play). Let’s get into it then: “YoRHa,” the stage play, is set in the year 11,939AD, which is millennia after NieR took place. But, as with NieR, it’s rooted in events that are the consequence of humans nearly going extinct and trying to preserve themselves. This time, the problem is with “Living Machines” that invaded Earth and slaughtered humanity, forcing the survivors to take refuge on the Moon (stick with it).

In hopes of one day resuming life on Earth, the humans constantly send down androids known as YoRHa in order to battle the Living Machines, but after centuries of doing this have so far been unsuccessful. An interesting note is that the Living Machines are able to constantly evolve while humans struggle to keep up continuously developing new technology. It parallels the survival mentality seen in the tech industries in which rapid advances are highly desired and products are made obsolete ever faster. We see this all the time in videogames especially in the pursuit of achieving “realism” through improved computer graphics.

Other themes in the play are more typical of cyberpunk fiction. The play follows the latest group of YoRHa units sent down from the Moon to destroy the machines. On the surface, they end up colliding with older YoRHa units known as The Resistance, who say that these newer models look remarkably human. What all YoRHa units have in common is being programmed with false memories. They’re also capable of experience fear of death and sorrow when their friends die. The older units have developed these emotions over time and have even given themselves human names, referring to their group as a “family.” Inside, there are parts of them that feel human, but what they lack is the near-human look of the newer units. What ensues is plenty of discussion around what constitutes being human. Does looking human matter? Is having human emotions the ultimate decider on what is human? Is knowing love and fearing death enough to be human?

“I dream, feel emotion… how come I’m not human?” starts one such debate. “Because you’re not alive.” “Our bodies are made out of mechanical parts.” “But, if we break, we will die. I’m so afraid of dying!”

The direct connection to the “YoHRa” stage play that NieR Automata has is that it seems to take place directly after it. You play as the only survivor of the play, one of the newer YoHRa units called No.2 Ver.B, as she is left alone in the world to fight the Living Machines. Where Yoko will take the story from there is anyone’s guess. But there is one potential clue in the script of “YoHRa.” It goes like this:

Erica: The machines have no emotions, that’s why they have no fear.
No.4: But if the enemy would be as varied as us and could learn, perhaps we might face an enemy with emotions of their own one day.
No.2: That’s for sure…… An enemy like that would be far more dangerous and frightening than what we’re up against now.

Could it be that No.2 ends up discovering new evolved forms of the Living Machines that have developed emotions? It seems a likely direction for Yoko to take the narrative. Especially as it would then touch on themes similar to those explored in the original NieR while also asking the types of questions that Bladerunner, Ghost in the Shell, and Ex Machina did. Where do you draw the line between human and machine? Are you right to kill a machine if it has human emotions and feelings? How humane are human beings if their most invested technology is made to kill?

Of course, while NieR: Automata will probably pry into these profound questions, the only thing certain about it is that it’ll be just as violent as Yoko’s previous games despite his claims that he is saddened by it. In fact, he said before that he sees how killing permeates videogames, and how there has been no great change to this, as a “personal failure.” Yet, by working inside the very thing he despises, Yoko has been driven to call it into question through his narratives, having us reconsider violence in all its forms, inside and outside of videogames.