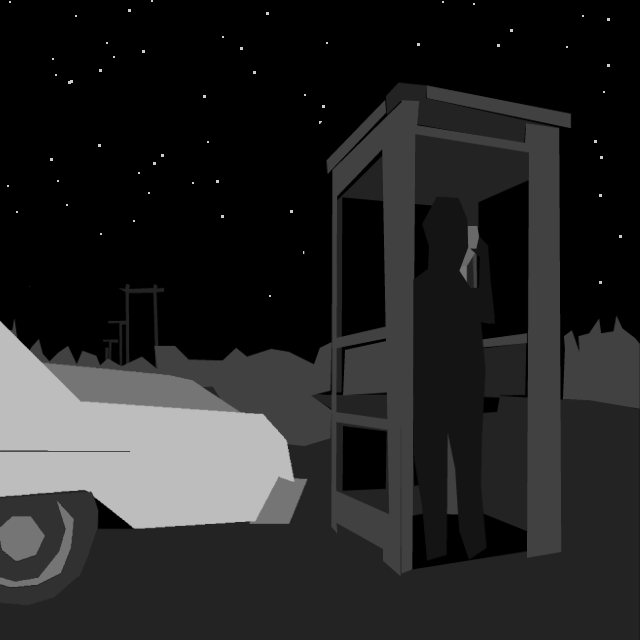 Whoever said “crime doesn’t pay” was obviously talking about the classic SNES game Where in the World is Carmen Sandiego. The geography-focused crime adventure puts players in the shoes of a detective sniffing out the evil criminal mastermind/fashionista (seriously, look at that red trench coat) Carmen Sandiego. By following hints and leads from various sources, you travel across borders on the hunt for Sandiego and her cronies.

On the morning of the 2015 Global Game Jam, married game dev duo Rilla Khaled and Pippin Barr found inspiration in Leigh Alexander’s recent Let’s Play of the original Sandiego game. “We really liked this idea of somewhat sympathizing with the poor people who get hunted down by the detective in Carmen Sandiego,” the couple says. “You rarely ever spare the criminals a thought: just get their personal details and chase them across the globe.”

In the midst of her own travels to Helsinki in the Let’s Play video, Alexander makes some interesting connections between herself and the targets that the game detective persecutes. As no stranger to having her personal information used as a weapon against her, Alexander explains that while, “I’m not a criminal or anything, I do know what it feels like to have people trying to find you.” She even addresses a heckling incident that came up in her latest lecture at a Helsinki game event, and how “when you’re traveling around the world and being persecuted, it makes you feel like you might be living in a game.”

What We Did is that game: a distortion of the typical cat-and-mouse or cops-and-robbers chase played out in most other videogames. This time, you are the hunted: chasing your own tail, trying and failing to erase a trail that’s always leaving evidence behind.

The unavoidable loneliness of a persecuted life.

“In Carmen Sandiago, there’s an inevitability to the detective succeeding,” Rilla and Pippin says. So the opening scene of their game immediately establishes the inescapability of your deed and capture, with the ominous assertion that “They know what we did.”

The game jam’s theme—“what do we do now?”—inspired the semi-multiplayer function in What We Did, though a single person can easily play both parts of this Bonnie & Clyde team. Playing both parts at the same time drives home the unavoidable loneliness of a persecuted life. Even when you’re in it together, the game seems to say, you always meet your persecutor at the end of a chase alone.

Rilla and Pippin wanted to twist the game jam’s theme into a “depressing, noir-y” experience: the passive and vague side of an action story. “At the time we were thinking of sequences with just verbs, like: We pray. We dream. We regret. We give up.” Each time the player chooses a random hide-out on the map, they’re given a checklist of these verbs to bide their time with.

Though the creators were aiming for a more poetic vibe with these simplistic sentences, it comes across in the game as more animalistic in nature. When you’re on the run, cornered and alone, all decorative language falls away. What’s left is a functional, almost Hemingway-esque phrasing.

“The criminal doesn’t get to have much agency. You’re just waiting to be caught.”

The duo says that the passivity enforced on the player demonstrates how “on the other side of this Carmen Sandiego chase, the criminal doesn’t get to have much agency. You’re just waiting to be caught.” In fact when I first played, I thought the game was broken. Because, as Pippin points out, players usually expect to be the sole agent of a game world. “It’s weird when games expect you not to do something!”

Further along in Alexander’s Let’s Play, she correlates more of her experiences to the unexamined plight of Carmen Sandiego villains. As the detective, she chases people down, and that’s okay because the game world frames this as a pursuit of justice. But, as Alexander says, “sometimes, when you’re really fixated on a version of reality that protects you, you don’t listen to what people are saying and start to see them as objects to pursue rather than people with ideas that have merit.”

What We Did reveals the darkness of a world that draws an impassable line between Us and Them. When you do finally decide to “give up,” the game leaves the player truly alone for the first time. The stars still twinkle, but every button you press is futile. Yet while your part in the world is finished, it continues on without you—whoever’s been chasing you probably having already moved on to a new target.

You can play What We Did for free on your browser here. For more of the duo’s work, you can take a look at Rilla’s and Pippin’s respective websites.