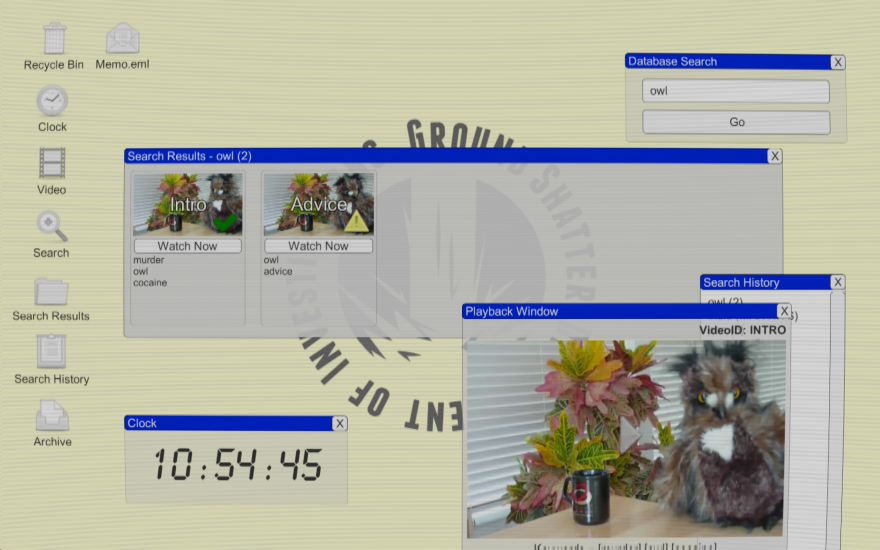 I’m the owl guy. When my webcam pops on during Google Talk or Skype chats what you’ll see is a miniature china owl looking over my shoulder from atop the fireplace. It does not hoot but sometimes I hear it. Directly behind me, at the other end of the room, is a cushion with an owl embroidered onto it sat on my brown sofa. And what sometimes sticks to the bottom of my mug o’ tea? A coaster with two little owls on them.

If you start talking to me about owls I will tell you facts about them: 1) they have cloaca (they shit, piss, and have sex in the same hole), 2) they fly almost silently due to their unique serrated wing feathers, 3) a group of owls is called a “parliament.” If we are near a computer, you will also be treated to a series of owl videos. You will have to watch Travis absolutely rockin’ it, and an absurdly cute Northern saw-whet enjoying a stroke, and let’s not forget the video of Tokyo’s owl cafe. All of these are important and essential viewing.

“swap a videogame title with an owl-related word.”

As a result of all this, I have a strigine wish that rarely comes true. And that is for more owl videogames. It’s slim pickings right now. You’ve got the Legend of the Guardians videogame which is, well, the less said about that the better. More noteworthy is Kaepora Gaebora from the Zelda series, who is a magnificent and respectable owl, and one rumored to be the reincarnation of an ancient sage. Also repping the good videogame owl side of things is Icarus Proudbottom, who is a little bit cheeky but also a teacher to go along with it, meaning his sharp wit is acceptable for he is also wise. Oh, and the unreleased Owlboy is obviously high up on that list.

Of course, being both a fan of owls and videogames, I have entertained myself and my pathetic dream by combining the two in a daring game of “swap a videogame title with an owl-related word.” It’s a classic. Let me just crack my knuckles…. okay. Are you ready (you better be because they’re terrible)? Fallowl 3. Hootline Miami. Life Is Strigine. Splatowl. Hoot of Duty. The Talon Principle. If you can come up with one for “tawny” I’ll be in your debt.

That was awful. But one that I missed out was Hoot Story. Yes, it’s Sam Barlow’s FMV crime fiction game Her Story, but it stars an owl instead of a widow. Brilliant, huh? I didn’t come up with it. All credit should go to The Wise Old Games Owl who, it turns out, stars in the game, which was made in 24 hours and is “based solely on misremembered information from reading a single review of [Her Story].” As that is the case, Hoot Story is significant merely due to starring an owl, at least in my eyes. Unfortunately, it isn’t a brilliant detective fiction about an owl that murdered a mouse trying to get away with it, or something along those lines. Nah, it’s not that at all. I wish it was.

a hand shoved up his cloaca

Instead, the clips that you search for in its ’95-style database are part of a grouchy and sarcastic rant about the videogame industry and its caustic monoculture. The owl is there to represent “wise” game creators with decades of experience who are, in fact, probably a little outdated and perhaps gross in their self-assured views. The owl speaks about Peter Molyneux and his many lies, GamerGate and the hopeless “indie” struggle, strip clubs and cocaine. Yes, the owl is shown to be a negative figure (he does have a hand shoved up his cloaca) and this saddens me. This is not the owl game I asked for.

But it is a game starring an owl, nonetheless. And it does have some fair points to make that aren’t related to owls at all. Plus, it is an amusing spin on Her Story for at least a few seconds. We are allowed that, aren’t we—a little humor? Yes, I think so. Now bring me more owl videogames. My talons itch for them.

You can download Hoot Story for free on itch.io.