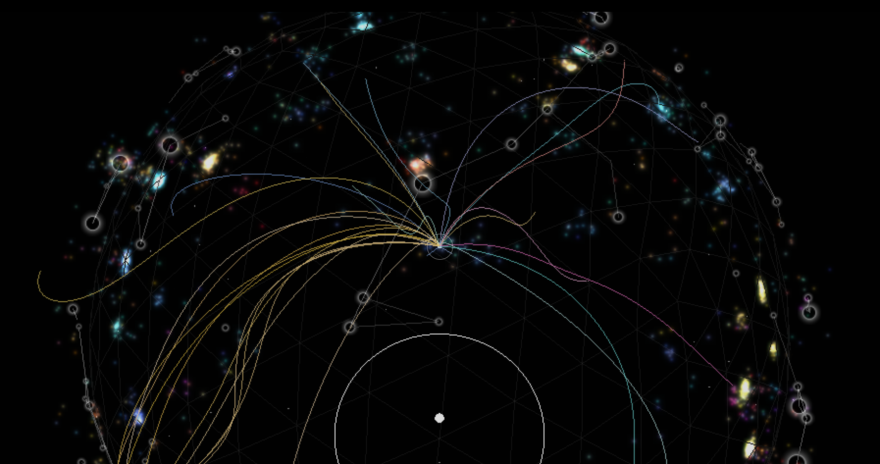 Since its launch in 2001, Wikipedia has become the largest and most popular encyclopedia on the internet, containing over 40 million articles in over 250 languages. It’s a refuge for the habitual late-night scroller, a balm for the compulsive fact-checker and, as its motto suggests, a questionable resource for students: “The free encyclopedia that anyone can edit.” Two years ago, French programmer Owen Cornec released Wikiverse, a HTML, CSS, and WebGL-supported Chrome Experiment that made falling down a Wikipedia hole at three in the morning that much more experiential. In Wikiverse, you can explore Wikipedia in the form of a shifting, twinkling 3D solar system, with related articles clustered together like individual galaxies.

When Wikiverse launched it contained 50,000 articles. Now, with its most recent update, that number has expanded to 250,000. Similar subjects such as art, music, and politics, are now grouped together. Of the logic behind these groupings, Cornec told The Creator’s Project that, “In this universe, articles are threaded together through a physics based simulation. Millions of inter-page links, chosen by thousands of editors, pull and tug at each other to group stars together. These choices crystallize articles into clusters and domains, where proximity equates to related-ness.”

Donald Trump’s orbit, which ranges from art deco to alcoholism

Dense galaxies of closely connected concepts dominate Wikiverse. Clustered around the William Shakespeare star, for example, are articles on his plays, his birthplace Stratford-upon-Avon, and the Globe Theatre. Just as nearby, but much less expected, is a link to MTV’s romantic comedy series Faking It. And therein lies the true appeal of Wikiverse: discovering connections between places, people, and things you would never have thought to find on the same side of the virtual star system.

The political quadrant yields particularly fascinating results. The Creator’s Project points to Donald Trump’s orbit, which ranges from art deco to alcoholism, Dr. Seuss to Citizen Kane (1941), the Bible to conspiracy theories. Hillary Clinton’s, by comparison, is much more straight-laced: branching off from Clinton, like individual strands in a spider web, are links to political figures such as Bill Clinton and Barack Obama, as well as the Cabinet of the United States and the American Bar Association.

Boldly go on your own mission inside Wikiverse’s expansive universe here.