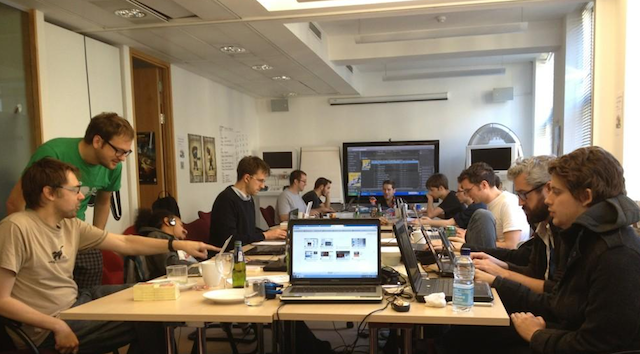 It’s 11 o’clock on a Saturday morning in London’s Soho and Mediatonic game designer Jim Griffiths is worried about a scoop. None of his company’s private details have been leaked to the press, nor has a disgruntled former employee decided to run his mouth about the mobile developer’s working practices.

In fact, for the duration of a 48-hour game jam, Griffiths isn’t a game designer; he’s a journalist.

The developers he’s covering are game journalists. They are making the games, each with some coding help from a University of Derby student and a couple of floating artists. The theme, designed to give each side a little appreciation for the other’s work, is ‘swap’.

Writing, it turns out, is hard, and writing scoops is even harder.

Scoops come from weeks of work and source networks that are hard to come by when you’ve only been in the job for a few hours. Despite those hindrances, Griffiths identifies event organiser Will Luton as the man who might harbor some unreleased information. He asks whether the event will be returning next year, and a moment of inspiration is enough to get him an actual piece of news: the JournoDevSwap will be returning.

By the end of the event, on Sunday afternoon, the four developer-turned-journalists have written thousands of words. For Lionhead’s Mark Backler, who would win the writing prize for his quality and dedication, the stress of deadlines came as a shock. Aren’t deadlines just as important in development?

“It’s different,” he says, “Writing deadlines are so short, and development is a longer process.”

The jam is being held in the plain office space of the Association for UK Interactive Entertainment (Ukie) in the middle of London’s creative centre. It’s full of hip media, post-production companies and design studios. App developers are springing up too, and Sony’s UK games headquarters is just around the corner. The scene in the Ukie office seems relaxed, the teams gathered around conference tables and the only stresses being directed at uncooperative screens.

“Writing deadlines are so short, and development is a longer process.”

The journalists-turned-developers are in a difficult position because so much of the work that needs to be done involves programming. The students take the strain here. Some fall asleep at their laptops, and they are praised for their efforts by their creative partners, who seem humbled by the work involved in putting their ideas on screen. CVG’s Rob Crossley observes that “it must be impossible for programmers to have ideas”, because their mindset is to see an idea as a series of problems, rather than opportunities.

But the writers do all make significant contributions. The Guardian’s Keith Stuart takes photos of textures, finds sounds and helps define the look of the game. Lewie Procter of Savy Gamer seems to spend a lot of time creating a Plasticine mural for his game’s splash screen, but also works on the sound effects. Freelancer Dan Griliopoulos designs the levels for his platformer but ends up going home to play XCOM.

The nature of game jams is that only certain types of games tend to get made. There are three endless score attacks and one 2D platformer. I’m a little surprised that none of the games feature any writing, but plot and motivation seem to go out of the window with the jam’s limitations.

By Sunday evening a winner had to be chosen. The victorious creation was Keith Stuart and Theo Chin’s dual-swapping endless runner Double Droids, in which a pair of robots flee from the edge of the screen, each with their own obstacles to avoid. Griliopoulos’ Split Destiny is a platformer which sees you jump between digital and bookish dimensions. Procter and Karn Bianco’s shoot-‘em-up Just Like Real Life features bouncing bullets, screaming deaths and a gentle piano on the soundtrack. I’m not even sure how it fits the theme. Crossley and Kevin Chandler produce the surprisingly polished GI Joyce, a touch screen game that sees a grandmother take on a whole screen of flying ninjas, who pick up any power-ups that she neglects.

And as for the journalism produced by the developers? Some of the writing, published on the Develop website, is so impressive that I overhear one of its editors get self conscious about the work he produces at his day job.