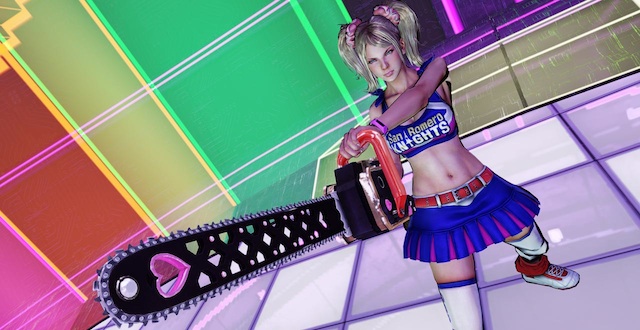 “This is supposed to be funny?”

My girlfriend asked this question after patiently observing 30 minutes of my playthrough of Grasshopper Manufacture’s new game Lollipop Chainsaw.

“Well, I guess the way she thinks her lollipops are making her fat is kind of a self-aware allusion to a culture that makes women feel physically inferior.”

“Right,” she said. “And the whole thing is obviously a kind of parody of the concept of male gaze, and how the male sees the female as a sexual object.”

“I have to review it, though,” I said. “So…” I wondered if there were other boyfriends who didn’t have that excuse.

Lollipop Chainsaw seems to present itself as a self-aware jab—an attempt to subvert the typical female videogame protagonist by portraying her as absurd and misguided. Starring a young high-school cheerleader named Juliet Starling who doubles as a zombie hunter, Lollipop Chainsaw majors on standard adolescent videogame tropes: physically idealized females and over-the-top violence. When Juliet saves her male classmates, they proclaim, “I’m going to masturbate to you tonight!” Her male martial arts instructor reveals himself to be an unapologetic pervert, tricking her into doing cartwheels in frilly underwear. And her fighting style is most effective with the aid of a stripper pole.

But Lollipop Chainsaw’s protagonist is so distinctly seductive—large breasts, a tight shirt, and a short skirt frame an archetypal blonde bombshell—that we must consider whether the game is exposing a problem or exploiting it. The game’s solution is an apathetic smirk, which later turns into an antagonistic scowl. Lollipop Chainsaw doesn’t expose misogyny or chauvinism in the game industry—it winks at them. This isn’t subversive. It’s simply supposed to be funny.

Before we discuss what kind of humor we’re dealing with, it’s important to note that Lollipop Chainsaw fails at a more basic expectation of hack-and-slash games: It’s not actually fun. A rudimentary combat system allows you to upgrade your combos as the game progresses. These pom-pom and chainsaw moves feel sluggish at best. Juliet is supposedly a masterful fighter, but it’s a reality that is never simulated. While the game seems sure of Juliet’s competence, you play the role of bumbling idiot—to say nothing of all the ill-conceived basketball and baseball-themed mini-games both you and Juliet are forced to play.

But this is supposed to be funny. Not fun. A game primarily about the excesses of videogames, Lollipop Chainsaw finds delight in cliches and uses them for visual splendor and thematic humor. It also seems to make the case that cliches are enough.

The game’s solution is an apathetic smirk, which later turns into an antagonistic scowl.

And yet, she is strong, fearless, and carefree in the face of death and destruction. At first glance, these traits seem to lend depth and intrigue to a distressingly predictable character. Yet these characteristics are not surprising, but obvious and necessary qualities of female videogame heroes. They do not take a lot of creativity to concoct. They are not unique. They are not, necessarily, laugh-worthy.

One thing Lollipop Chainsaw does to evolve the zombie genre is to give the zombies a voice. A shocking number of zombies call Juliet a “bitch.” Boss characters spew strings of one-liners attacking her sexual integrity. One punk-rock zombie repeatedly screams gendered insults like “vanilla slut” at Juliet, the words literally becoming letters that fly toward her and endanger her. When she beats him enough to reach the halfway point in the boss battle, the boss laughs maniacally and says, “You think that hurts me? I just jizzed a little!”

Sticks and stones and all that.

A player might wince at the barrage of insults, but Juliet blows them off. She finds them hilarious and motivating, apparently. Sticks and stones and all that. Juliet is the kind of heroine that can take a gendered insult in stride; the kind that can serve as eye candy; the kind of girl that maintains her primary role as a sexual object, even while she saves the world.

We’re reminded repeatedly not to use the camera controls to look under Juliet’s skirt, but a more accurate way of putting it is that we’re tempted repeatedly to do so (especially if you want all of the Achievements; yep, there’s an Achievement for that). Lollipop Chainsaw brings our lust for 3D rendered cartoon characters to the forefront—causing us to confront our own absurd desire for an unrealistic ideal. It makes us complicit in the videogame culture that the game so openly revels in. Juliet, though, doesn’t subvert our prejudices, but only sanctions them.

As a game, Lollipop Chainsaw abandons any semblance of compelling gameplay for the perfect girlfriend who reaffirms suspicions that sexism really isn’t a big deal, as long as you’re not a stupid crybaby about it. The developers have made Juliet in their own image: whimsical, unashamed and flippant, Juliet answers my girlfriend’s question implicitly with every wry smile and gleeful decapitation.

Juliet leaves her booth at the Electronic Entertainment Expo, gets in a helicopter, and lands on top of a skyscraper in Louisville, KY. She jumps off, lands on the street, and winks at men as they hit on her. One man goes too far: he lays his hands on her. Juliet pushes him into the street, where a car plows over him. She hails a taxi, and when she gets in she finds herself slightly depressed—she doesn’t know why.

She enters my apartment building by doing cartwheels up the stairs. “Do you hear that?” I ask Jennifer.

“A chainsaw!” I jump to my feet and watch helplessly as a chainsaw carves through my locked door.

Juliet takes a lollipop out of the candy bowl next to the door and laments, “Ugh, I am going to be so fat.”

My girlfriend, assuming that I invited Juliet to stop by, leaves in fear and disgust before I can say anything to the contrary.

“I heard you over-thinking my game and wondering if it was supposed to be funny. Duh! Of course it is! Some of you guys can be sooooo pretentious. Jeeeez.”

And with that, she left as fast as she arrived, bursting through the window, leaving me to pick up the pieces of broken glass hiding in the grass outside. You can’t leave that stuff lying around. It’s dangerous.