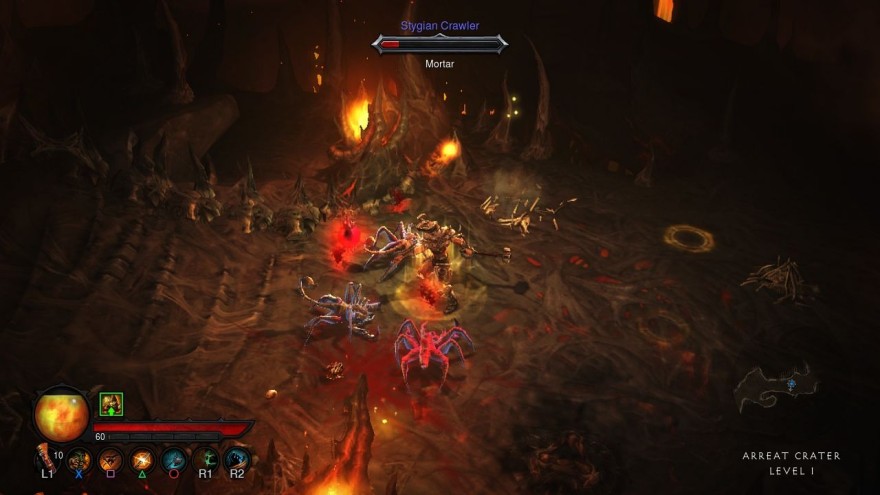 The Diablo series has historically rested upon these clicks. Your descent into the realms of hell typically involves mowing through bottomless pits of surly goatmen, and, while the goatmen are freakish, the interface is clean. With just the click of a mouse, you can approach said goatmen, talk to goatmen, whack goatmen with a mace, toss poisonous spiders at goatmen, summon a few hydra heads to devour goatmen, and then gather the scrolls and gauntlets they drop.

Obviously, clicking was a no-go on consoles, where the bloodshed of unclean masses is regulated by four face buttons and the thumb-stick. “What ends up happening is the rhythm flows more,” he says. “You’re constantly moving. It’s more mobile, more dynamic.”

This brings to the fore a central question that videogame players have debated for years: What is the best way to play—with a keyboard and mouse, or with a gamepad? My hunch is both. As Diablo 3 leads us to believe, this is more than a matter of taste. These two devices come from dissimilar places, and they function very differently as playthings.

These two devices come from dissimilar places, and they function very differently as playthings.

The precursor to the mouse—before Xerox PARC’s handheld shell, and before Steve Jobs plucked the idea for his Macintosh—was patented in the ‘60s by a computer scientist by the name of Douglas Engelbart. It wasn’t meant to be used with PCs because in those days there weren’t any. Rather, the intent was a primitive sort of multitasking, so that computer operators wouldn’t have to hold a light pen up to a cathode ray tube while entering data. They could have both hands free. By the time the mouse reached Xerox, the concept had inched closer to the tool we use today, an off-white plastic cube meant for navigating a graphical interface, assuaging the pain of manually typing commands.

The convenience of the mouse, of quickly pushing an arrow across the screen, is native to home computers. Thus, usability is a naturally occurring element in Diablo 3 for PC. “You click somewhere and your hero will go there automatically. You have time to use a potion. You have time to use a skill,” Berger tells me. As a result, players are less dialed in on their brightly-plumed witch doctor, following the cursor. “You’re eyes are darting all around the screen,” he says.

The opposite is true of Diablo for consoles, where the player’s eyeballs stay glued in place, ne’er wandering far from their brazen warriors. You have direct control, and that requires your undivided attention. So much attention, in fact, that the team pulled the camera in tighter. They dumbed down the enemy artificial intelligence, the throngs growing too dense. The testers couldn’t keep up. The players were so zeroed in that they didn’t even notice when their health was low. They decided to flash a potion icon above their characters’ heads. “They’re really focused,” Berger says.

Just as the mouse does for computer games, the joystick and its past life illustrate why we play console games the way we do—namely, by staring intensely at little people on-screen. While the Atari 2600’s is the obligatory early example of a pad with a stick and a button, it’s debatable which controller to credit as the first. You could argue present day gamepads owe as much to the Magnavox Odyssey’s mod white boxes, or the NES pad for getting the layout right.

Still, one thing’s certain. The joystick originated not with games but seventy years prior, and it belonged to the field of aviation. The Blériot VIII, a modification on the Wright bothers’ primordial flyer, was the first known aircraft that used a stick to control roll and pitch, which helps to explain why console games require centralized focus. If you’re flying an experimental glider at an altitude of 660 feet, one that’s constructed of wood and a bicycle chain, damn straight you’ll be concentrating solely on controlling the plane.

Piloting an antiquated flying machine and navigating folders are pretty diverse activities. It follows that the mouse is better for some things, and the thumb-stick for others. For instance, take Diablo 3’s barbarian. Activate whirlwind and, Berger says, “He turns into a tornado of knives and axes and whatever. You can do all these beautiful curves, like a bowling ball in a china shop, ramming into groups of enemies, just moving the stick,” says Berger. It feels good, to put it simply.

With the mouse, not so much. However, using one has its own advantages. Berger tells me that the all-important act of leaping is much less accurate without the ability to point and click. As he goes on talking, it occurs to me that we may need a new mechanism, some genius invention that combines the finesse of joysticks with the clickability of the mouse. Until then, take your pick.