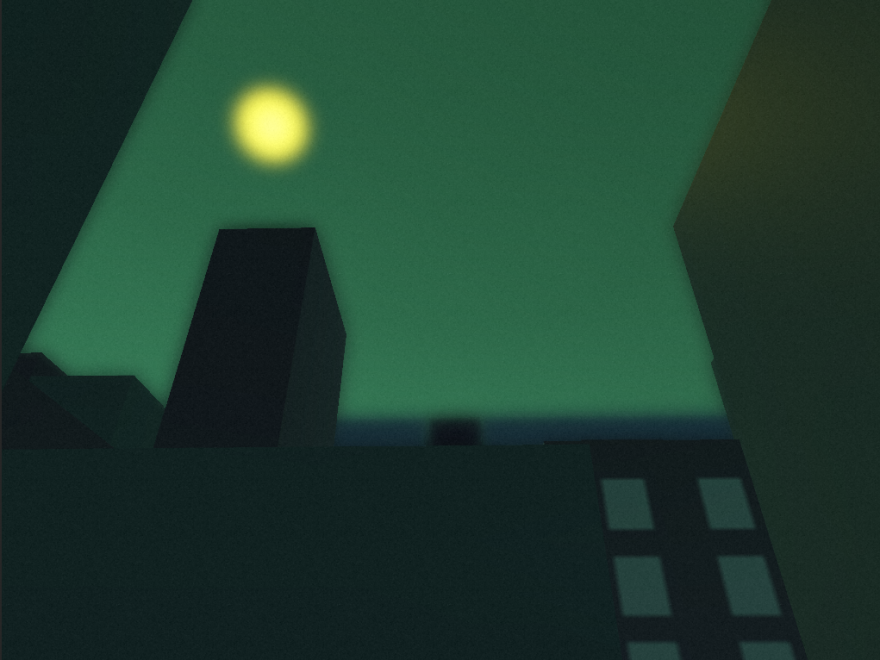 Maze designers are under no obligation to make their creations difficult to traverse. A maze is simply a collection of branching routes, one of which leads to an exit on the other side. In theory, these routes can be readily navigable, and in that sense all cities are mazes. In practice, however, maze design encourages obscurantism: Insofar as the shortest route from point A to point B is always straight line, it’s hard to care about efficiency while adding roadblocks. CNNT, which was created by Lazy Penguin for A Game By Its Cover 2015, attempts to reconcile these two interpretations of maze design by projecting an urban façade onto a typical maze.

On a map, everything is just a box.

You find yourself dropped in the center of a city. The building in front of you has windows, but most of the buildings you will encounter are mere boxes. This makes a certain amount of sense: On a city’s map, everything is just a box. CNNT turns that abstraction into the built environment with which you must reckon. But buildings’ architectural features are useful when navigating the city because they help you differentiate between one box and another. That is what CNNT purposely lacks. As you wander around its maze, the various green and purple boxes start to blend into one another. Have you been here before? Are you going in circles? Maybe. Probably. But how could you possibly know? The city was always a maze, but stripped of its urban qualities this reality becomes more apparent.

CNNT’s documentation suggests that there’s a way out of this maze, and who am I to doubt this claim? I didn’t escape the city, but hardly felt cheated or unfulfilled by this outcome. As I wandered its streets and the soundtrack thrummed in the background—it has the not-entirely-musical quality of machine feedback—I slowly began to feel like the city was crushing me. Occasionally, ominous voiceovers could be heard describing the effects of the city. If Mads Mikkelsen’s Hannibal delivered urban planning lectures, they would sound just like CNNT’s voiceovers. This city crushes you because that is what oppressively designed cities—or maze cities—do.

In that respect, CNNT is a 21st century version of Berlin: Symphony of a Great City. Filmed in 1927, Walter Ruttmann’s spectacular documentary set daily life to the rhythm of machines and routines. There was music, sure, but the true beats came from the city. It was both the orchestra and the conductor, and the tension between these two roles is what makes Berlin: Symphony of a Great City fascinating. Its environment is not wholly oppressive—indeed, there are small touches of romance to be found within it—but its potential for crushing darkness is clearly on display. (That more pessimistic vision of the city could be found in Fritz Lang’s Metropolis, which was also released in 1927.) CNNT, like Ruttmann’s gem, gives you all the tools to simultaneously appreciate and be horrified by the city. You could turn off either of these works, but they are alluring enough to keep you around. Being crushed by the urban environment is far more appealing when there’s a mechanism for getting out.

You can download CNNT for either Mac or PC on Lazy Penguin’s Itch page.