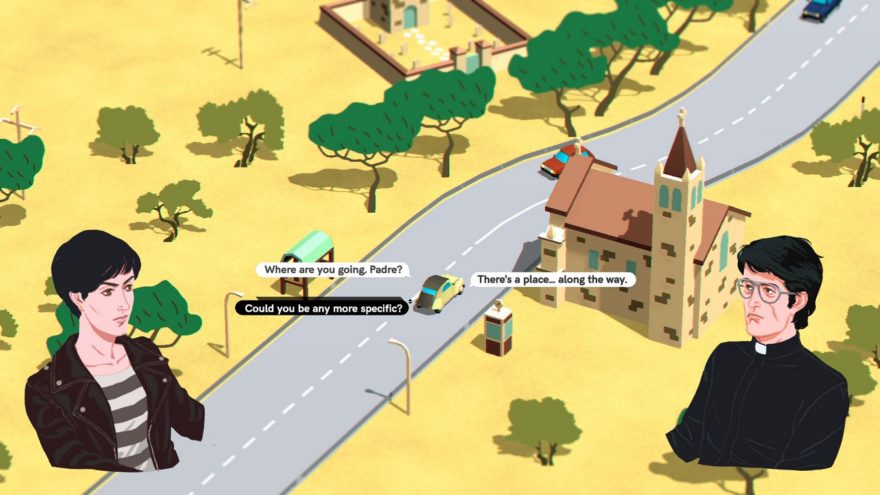 Milan-based studio Santa Ragione has revealed its game Wheels of Aurelia will be out in full this month on September 20th for PC. It’ll cost $9.99. That price includes the game’s full soundtrack, comprising four songs written, composed, and performed in the style of Italian 70s music. The game is also coming to PlayStation 4 and Xbox One on October 5th.

Wheels of Aurelia puts players in control of Lella and Olga, girls caught in the midst of Italy’s 70s social revolution on their road trip to France. Taking place on the Via Aurelia, Lella picks up various hitchhikers and learns their motivations along the way. Part isometric racing game, part interactive fiction, Wheels of Aurelia allows players to both learn the backstories of Italian locals living in a “time of terrorism, kidnappings, and political turmoil,” as well as desperately evade whatever pursuers may follow.

illegal street races and intense debates with a catholic priest

Santa Ragione co-founder Pietro Righi Riva adds that you can expect car chases, illegal street races, and intense debates with a catholic priest. The only way you can get to experience each of the different possibilities the game has to offer is to replay it and make different choices—Righi Riva notes that each playthrough lasts around 15 minutes but there are 16 different endings to discover.


We got a chance to go hands-on with Wheels of Aurelia’s beta last year, noting that while trying to select dialogue options while racing down the coast’s often-curving roads made it feel like a “texting-while-driving simulator,” it did portray the banter of Lella and Olga in a way that captures a “burgeoning relationship to each other and the rest of the world as it evolves.”