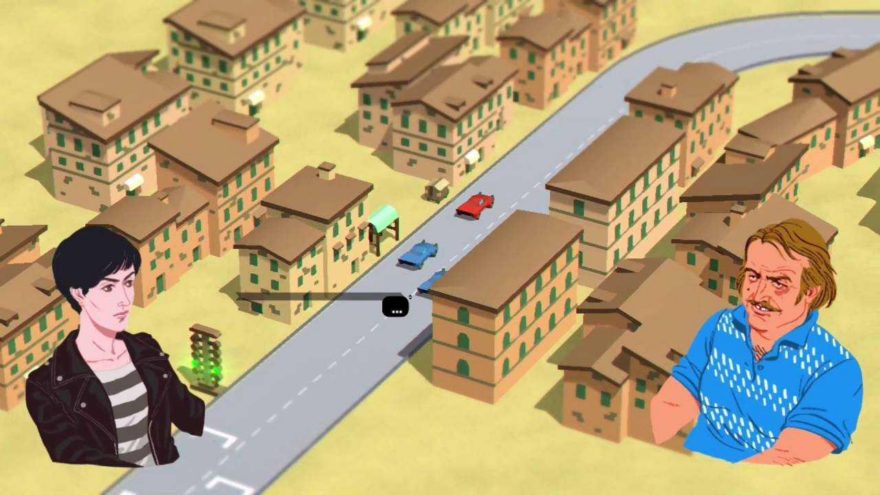 Elevator pitches have the benefit of being ideas rather than actual things in the real world. With the right pitch just about anything can sound promising. Take communism, for instance—a system that, on paper, reads like an egalitarian haven, promising equality, fairness, and a stable life for everyone. It often doesn’t play out so well when put into practice, but the idea captivates so much that it lead to countless wars, dictatorships, and deaths.

Wheels of Aurelia, set in a 1970s Italy reeling from feminism, communism, revolution, and terrorism, sounds better as an idea than it plays. You are Lella, a “restless” woman driving to France with her newly found companion, Olga, down Italy’s famous Via Aurelia. As a narrative racing game, it appears to promise conversation and the open road—perhaps exploring how the wide expanse and sense of motion of a road trip often leads to discussions you may not regularly have. As a political game, it hopes to tell you about a fascinating moment in history through the perspective of average, everyday people.

Wheels of Aurelia falls short on just about all fronts

In practice, Wheels of Aurelia falls short on just about all fronts. Opening with Lella speaking to herself while driving alone at night, the first lines of dialogue capture the game’s inescapable artificiality. Aside from having a full blown conversation with herself, with dialogue options and all, Lella is even kind enough to refer to herself by name (you know, in case anyone who needs that information is only just tuning in). Everything feels forced in Wheels of Aurelia: whether it’s shoving a racing game into a narrative game, or its woefully inorganic dialogue, or the many high-minded political topics that get unceremoniously thrown onto the track to collide head first with Lella’s car like so much road kill. When I originally tried out the demo last year, I described the combined racing and narrative aspects as coming across like a “texting-while-driving-simulator;” an issue which appears to have only grown more pronounced with time.

The experience of trying to process and engage in conversation while (attempting) to navigate the game’s janky driving mechanics is nothing short of maddening. Eventually, after a few playthroughs, I decided to just abandon the dialogue altogether whenever I was expected to race, which at the very least allowed me to engage with the racing on a deeper level. But with only a single button press for acceleration and no consequence for crashes, those depths were admittedly pretty shallow. But, hey, at least I was finally able to outrace that random asshole who, for no discernible reason, calls me a slut and challenges me to a race.

Most of Wheels of Aurelia’s narrative and dialogue is characterized by these kind of jarring, inexplicable artifices. Designed to be replayed several times, each playthrough is only about 15 minutes, with the path you choose leading to one of 16 different endings. You are painfully aware throughout that you are playing a videogame, whether it’s by watching the limited, inelegant, and jumbled dialogue system sputter to try and keep up, or the disregard for consistent characterization, or numerous glitches that actively get in your way while driving. (After almost a dozen playthroughs, I have yet to be able to pick up one of the hitchhikers along the road because if you don’t time when you pull over to the pitstop perfectly, you will clip into the side railing and spiral away with no ability to reverse or try again until the next playthrough.) The more times I played, the more painfully aware I became of the game’s limitations on both a mechanical and narrative level. Events like a bank robbery happen and, as you’re racing away from the cops, the conversation gyrates between freaking out over this abrupt turn of events and casually discussing the robber’s political beliefs.

Yet, for all its shortcomings, Wheels of Aurelia never lacks ambition or daring and you can’t help but want to respect it for that. During the drive, Olga suddenly blurts out that she’s pregnant—often at the most inopportune moments, like when you’re racing that asshole dude who called you a slut and can’t divert your attention from the road to give her support. But it doesn’t really matter either way, because Wheels of Aurelia handles abortion with the tact and subtlety of Bojack Horseman’s Sextina Aquafina. At most, you have the option of being somewhat non-judgmental toward Olga. When the conversation forces you to question her reasons for going through with the abortion, you can either completely ignore her right to make her own damn decisions about her body, or you can more gently ask, “I don’t want to change your mind, just understand.” To which Olga replies, “There are a lot of reasons.” To which you can respond with, “Name one,” or “Were you abused.” The exchange is just one example of the game’s cringe-worthy attempts to broach serious subjects.

For all its shortcomings, Wheels of Aurelia never lacks ambition or daring

Wheels of Aurelia’s bullheadedness in the face of just about all its sensitive and political topics is, perhaps, an attempt to depict a specific time. Despite calling herself a feminist, perhaps Lella is simply a product of her circumstances, a person born in a place where abortion is considered an unforgivable sin no matter how “with the times” one might believe themselves to be. But even that choice doesn’t hold up. Later, the girls return to the topic with Olga asking, “Do you think abortion is a bad thing?” Lella can respond by either cavalierly declaring it just a medical procedure, or soberly labeling it a traumatic emotional experience.

This is the kind of deftness with which Wheels of Aurelia approaches all its high-minded topics. At some point, someone’s scarf leads to a discussion about worker rights—or something, I’m not entirely sure because the game also assumes you’re already pretty caught up on the finer details of Italian culture in the 1970s. At another point, you have the option of literally asking, “Got any political opinions?” as we robot-humans are wont to do during lulls in conversation. At best, the characters feel like talking heads for abstract concepts and political stances. At worst, they’re offensively inhuman, an apparent jumble of code wearing a fake mustache and asking where the nearest vehicle refueling facility is. It’s a shame, because the negligible characterization leads the game to be equally unsuccessful as an attempt to steep you in Italian history and culture. Lacking relatable personalities, and with an isometric art style that looks pretty enough on its own, but fails to give any sense of place, Via Aurelia feels more like a backdrop rather than a character worthy of the game’s title.

Somehow, despite its failure to deliver on almost everything it sets out to do, you can’t help but keep rooting for Wheels of Aurelia to turn things around. At times, when the dialogue manages to work in a sensical fashion, you catch glimpses of the pithy exchanges that might’ve been. The game’s big ideas and aspirations seem intoxicating—until they’re a real thing happening on your screen. At the risk of overextending my metaphor, like communism, Wheels of Aurelia appears on the surface to be a celebration of human empathy. In practice, it’s a system that forgets to account for the human spirit (while also harboring some seriously iffy ethical opinions).

All in all, the game feels like a tourist trap rather than a destination.

Update: It was later pointed out by Santa Ragione that the game’s auto-drive function will automatically pick up hitckhikers if the player releases the acceleration button, though this mechanic does not apply to winning the races referenced in the review.