This Is My Costume explores life with a non-binary gender identity and its parallels with performative attire. It’s a short point-and-click adventure that was made by game design team Pride Interactive for a recent Ludum Dare, in which the theme was “You Are The Monster.”

It begins with the protagonist, Finch, getting dressed—first by putting on a binder, then a t-shirt that reads “this is my costume,” and some cat ears. Later, during a short walk around a party, the character is shown relating more to an abandoned balloon in the corner than the other party-goers, longing to be elsewhere. 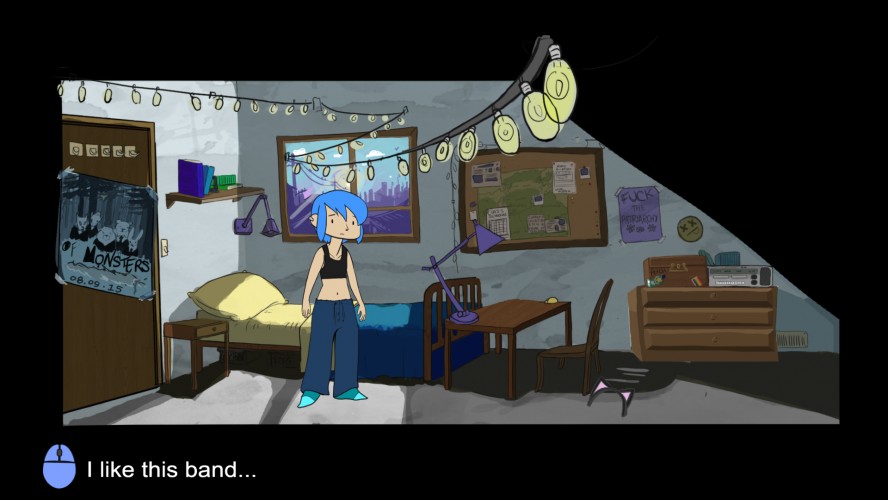 Once they return to their room their friend Fletcher arrives. The two have a brief conversation about what it’s like for Finch to be out to their brother. Fletcher then promises to stand by Finch’s side when they come out to their parents. The point of the game should then become clear.

a serious point in a comedic package.

It sets out to redefine what it means to be in costume. Finch has to wear one everyday but it’s not the kind you rent from a shop. It’s a mask over their identity, necessary as they cannot predict how people will react to their true self, and fearing the worst.

The game is a short, quick, quirky play with multiple outside references (hi, Frankie and genderbent Luigi!) that manages to make a serious point in a comedic package.

You can download This Is My Costume for free on its Ludum Dare page.