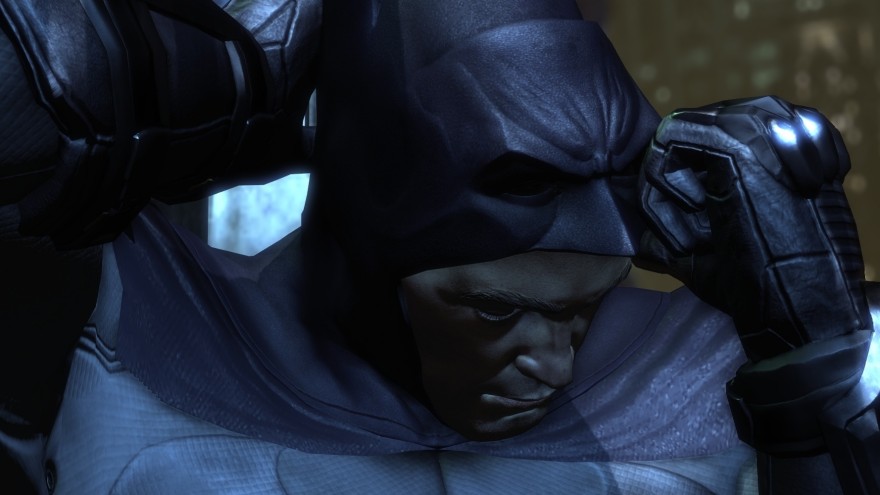 If you haven’t been keeping tabs on the latest superhero news, you should know that there has been a major shake-up in the batcave. A tried and true actor has moved on, replaced by an untested newcomer with an impressive résumé.

No, I’m not talking about Christian Bale giving Ben Affleck the keys to the batmobile. I’m talking about Kevin Conroy stepping aside for Roger Craig Smith to reign in Arkham Origins. Never heard of them? You’re not supposed to. As videogame voice-actors, they operate in relative anonymity, discreetly performing the role of vocal automatons in the recording studio. “The reality of the job is that I go in and deliver a performance the director is asking for. From line to line, it’s very methodical,” Smith tells me. There’s little rehearsing. No method acting. No being Batman.

This is the nature of the biz. Voice-acting is an impersonal affair. Smith isn’t Orson Welles. He’s a hired mouth—“a very, very, very, very, very, very, very small portion of what makes this character who he is,” he says. The protocol works well enough for most good guys in games, capturing the impersonal emoting that one would expect from a war-weary Seal, or helium-huffing cartoon hedgehog. But do we need more personality from our digitized Batmans?

After all, the persona of Batman goes beyond an ideal of justice wrapped in a bullet-proof bodysuit. His celebrity and demeanor has been influenced by an array of individuals bringing their own unique perspectives to the cape. Michael Keaton painted Batman as an old-sport with snappy one-liners. The grittiness of Christian Bale’s testosterone-laden voice moved the dark knight into tough-guy territory. Even the fatherly diction of Adam West has penetrated the psyche of cinema’s favorite vigilante. After so many original portrayals, we wind up with a multifaceted crime-fighter. It’s hard to go back to the Detective Comics #27 days.

Smith never imagines himself as Batman, neither before or after playing the part.

Yet with the Arkham games, any semblance of personality is chunked from the window of Wayne Manor. While the vocal performances are technically flawless, they’re also predictable: heartless and rugged like a voiceover in a truck commercial. This may be because Smith never imagines himself as Batman, neither before or after playing the part, although that seems like a perfectly reasonable thing for an actor to do. “The reality is that when I look in the mirror, I see this dorky guy looking back. And I don’t see those characters,” he says. “I don’t feel anything close to them.” Well, that’s pretty blunt.

Let’s get one thing straight. This is not the fault of the actors, but of a detached approach to acting. As Tom Bissell observed in The New Yorker when profiling Jennifer Hale, the female voice of the Commander Shepard in Mass Effect, the recording booth can be an unworldly place.

“The loneliness of acting in a booth, with no one to respond to, can be difficult. . . . Quite often, before Hale’s takes, Livingstone [her director] would say something like, “O.K., you’ve just finished a big fight.” Other contextual phrases Hale was fed to color her takes included “professional,” “romantic,” “combat,” “intimate, not romantic,” “distance,” “before combat,” “walking” (also known as “walk-and-talk”), “exertion,” and “after combat.”

Not exactly Michelle Pfeiffer welling up as she dances with Keaton, when she realized aloud: “Oh my god, does this mean we have to start fighting?”

Over the phone, Smith had trouble recalling the exact voice he’d used for Batman. There is some growling involved, but how much was not certain. “I don’t even remember! We do so many versions,” he says, explaining that he doesn’t know which takes make it into the final product. “Usually, I find out by watching trailers on-line.” Over the span of the last few years, Smith has done voices for a ludicrous number of characters, including: Sonic, Chris Redford (Resident Evil), Captain America, Human Torch, the Sega announcer, enemy soldiers (Metal Gear) and pedestrians (Red Dead Redemption). No wonder he can’t keep up.

One thing he is sure of is that his Batman is “emotional,” portraying the millionaire orphan as a moody millennial who’s still finding his foothold in life. Not that Smith can relate. Although sometimes he is forced to reach down deep and pull from tough experiences, he keeps it to a minimum. “Hopefully not a lot of my personality is coming through,” he says. “I need to do what’s right for the character.”

No one is not going to play the game because Batman is deficient in charm.

In some ways this approach makes sense. These are computer models, so recording their dialogue systematically fits the schedule of software development. Not to mention, these are combat-heavy action games: no one is not going to play the game because Batman is deficient in charm. Charisma, or the lack thereof, takes a back seat to punching out unwitting security guards. But these are also entertainment products with big budgets that are played far and wide. And they star Batman, one of the most complicated and dissonant comic book characters out there. It seems like a missed opportunity.

I wondered if Smith through his role in the production had learned anything about the true nature of Batman, a quirk or quality that only someone who has played the part could see. “You know, I suppose…” he said, before pausing as if he was contemplating something that a voice-actor was not supposed to, “I feel that Bruce Wayne is the character through and through, and Batman is sort of a version of Bruce Wayne. At its core, it’s always Bruce Wayne.” He’d never make it as a voice actor.