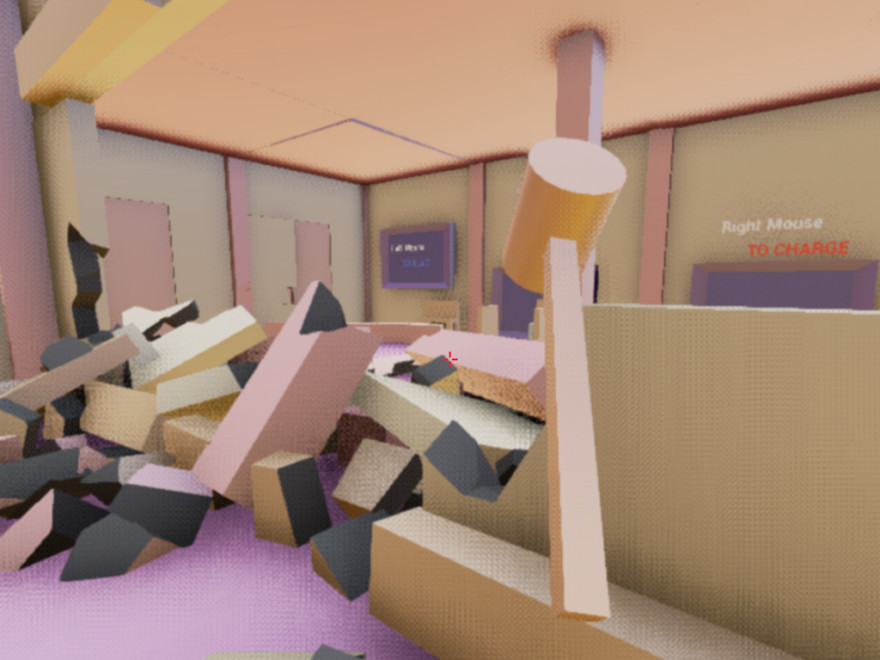 Where Is My Hammer lets you destroy a whole house, its contents, and the car parked outside with a large mallet. You can chip away at the structures carefully, causing cracks in pillars so you can sit back and watch as it slides in half before collapsing. Or you can rush in with a red-hot charged hammer, flinging it senselessly as if your name was Jesus and you’re breaking up the sinful commerce held in the house of the Lord.

This is why my dad now only buys hammers with metal handles.

He used to have three hammers that each had a smooth wooden handle. He would have me hold one while completing various DIY tasks under my mother’s orders: put up a new fence in the front garden, re-decorate the kitchen, put up a new shed to hold all the garden tools. He sawed and hammered while I leant against a nearby wall practising my thousand-yard stare.

He should have seen it coming given that he, too, was one of those kids at an earlier age. I would get bored. And I had a hammer in my hand. So I would head out into the garden to lay into concrete slabs, wooden panels, the soft mud in the ground; anything that could be hit bluntly with the flat end of a hammer.

I did this so vigorously that all three of those hammers split in half at the handle eventually. I remember how the cracking of the wood surprised me the first time, but became my goal upon the second and third; I’d take breaks between thuds to study the handle for signs of fresh deterioration. This is why my dad now only buys hammers with metal handles.

There’s no odd science or complex psychology behind my relishing destruction. It can be explained with a mathematical equation: Boredom + Hammer = Catharsis. It’s why I spent most of a summer holiday in using a large, sharp rock to chip away at even bigger rocks while my parents sunbathed on the beach. And why, after being told to rest by a doctor after being hit by a car, my devotion to the PlayStation One game Trash It!—a game about destroying everything with a hammer in a quest to find a bigger hammer—flourished.

And as I cherished the playful demolition of Destroy Your Home, I find chemical satisfaction from indulging the guilt-free aberration that Where Is My Hammer offers. Except, I have happened upon one gripe. “Everything can be destroyed!” reads the game’s full list of promises. Everything, that is, except the hammer.

You can download Where Is My Hammer for free on Game Jolt and itch.io.