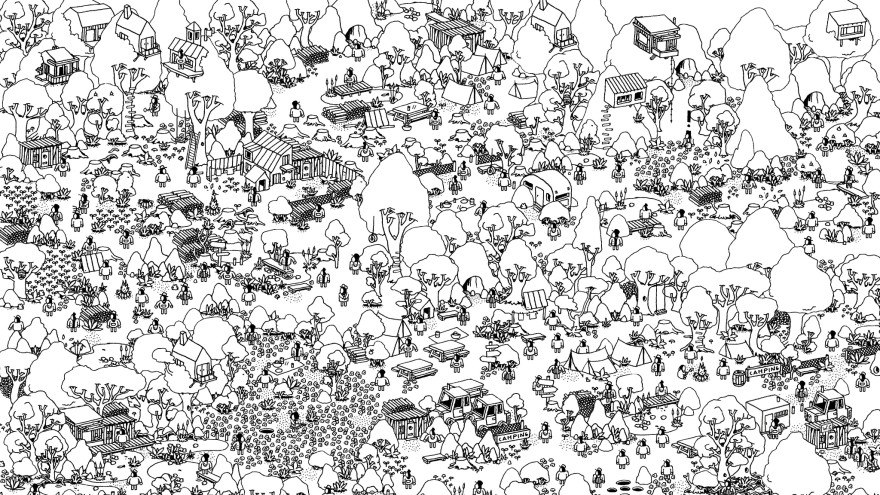 Where’s Waldo? (1987) has stepped out of the past and into a super stylistic new game. Hidden Folks is the latest from game designer Adriaan de Jongh, in which you can relive the eyestrain of days past in a grown-up version of the classic find-the-character game. This new project comes in the wake of de Jong’s previous efforts, the quirky titles Fingle (2012) and Bounden (2014), produced with the now-defunct Game Oven. This time he’s teamed up with illustrator Sylvian Tegroeg to create something entirely different.

The premise is simple and differs little from its striped-shirt predecessor: find the hidden character in a crazy busy illustration. Hidden Folks, however, kicks it into hard mode with the added layer of interactivity through animations and moving parts all doing their very best to snag your attention. Even when they aren’t moving the black and white illustrations are delightfully intricate and filled with charm. Animated, they have a music-box-like magic that’s just mesmerizing.

The interactivity itself doesn’t add anything particularly revelatory here, but it doesn’t need it. There is a certain pleasure of finding hidden things and a certain frustration at not being able to find them, especially when you know the secret is right there in front of you. Bringing the Waldo concept to videogames only fits the bill: Games are notoriously good at hiding secrets and players are just as good at finding them, even if that’s not always blatantly the objective. And whether that means finding the guy you’re actually supposed to be looking for or just noticing all the tiny enchanting details of the moving illustrations themselves will be up to you to decide.

You can find out more about Hidden Folks on its website.