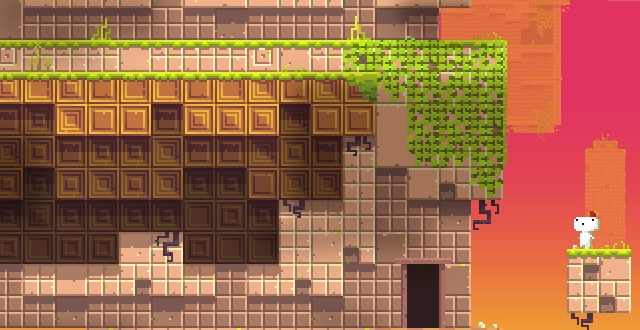 A fez is another name for a condom. Kind of like a fez but for your other head. — Urban Dictionary

Your “other head” in Fez is Gomez—a ghostly white tool with the face and figure of a person but no other well-rounded characteristics. As a character Gomez’s feelings range from dawning awareness to total slack-jawed awe of the world around him. And this is suggestive of how we are supposed to feel, too. Fez is a long series of sensual first impressions that we want so badly to prove eternal. The taut, precise pixel rooms and landscapes by creator Phil Fish rank up there with Craig Adams’ spidery filigree in Superbrothers: Sword & Sworcery EP. But unlike Adams, who conceived his game as a kind of digital séance for the iPad, Fish never lets us lay hands on his work. This is a spectacle for those of us who think we are deeper than Modern Warfare bros. We are not.

Fez is like many other games on Xbox 360 that we gape at and respond to by pulling the trigger. At the beginning of the game, a giant spinning hexahedron gives Gomez the red fez—a magic hat that lets him rotate the flat world, which appears to be wrapped around a cube. Left trigger turns left; right trigger turns right. Each of the four sides reveals something new around the corner. Doors open up new islands, and collectible squares assemble into 32 golden cubes that unlock the final door. Each new environment becomes like a toy that we turn round and round with wide eyes until the doors are all opened, the ground traversed, the squares collected, and the happy potential exhausted.

It’s an act of seduction, or maybe hypnotic persuasion.

When the 32 cubes are found and the game is ended, there is the option to continue unraveling its other half, which is the lattice of secrets that hide the 32 anticubes that stack with the 32 golden cubes to produce the second ending. Since Fez was released on April 13, it seems to have transformed from a late-2000s-style platform game built on vaguely metaphorical puzzle mechanics (see: Where Is My Heart?, Closure, Braid) into a newer type of participatory game that persists outside the screen. Its imagery has disseminated like a meme into internet forums, where players post diagrams translating the in-game glyphs that represent letters, numerals, and button rituals; point out QR codes that transmit mysterious messages; and reveal in videos the final anticubes covered up by odd posters and statues. Five tumultuous years in the making, the game actually lives up to its myth—it turns out that is literally what Fish has been building.

In one sense this is a straightforward tale of completion: a finite number of stages and cubes and retries and man-hours lead inevitably to the end. Recent stories of how the internet combined its powers and tested thousands of possible button inputs to solve Fez’s most elusive puzzle show how any program can be cracked with effort. Gaming problems are added, then subtracted, like they always have been.

So why does resolving 100 percent of Fez result in an arbitrary 209.3 percent? In another sense, this is a trick being played on everyone, a fairly mean one. Flat squares can’t build a cube, but there they are, twisting into three dimensions. Playing the game’s most basic puzzles, just moving Gomez through its world, is an allowance of lie after lie. The landscape floats by on optical illusions, such as when three distant scraps of vine weave a climbable wall when aligned in profile, or platforms in the background and foreground collapse into a walkable path, or any yawning distance is quietly flattened to a few simple footsteps. These mistakes of perspective fold and hide themselves before we either notice or care that something is wrong with this picture.

The interesting action lives between these mistakes and utter madness. If puzzle games like the heady four-dimensional Miegakure or brutally logical Portal slow us to the speed limit of our comprehension, Fez has us blindly cutting up the fabric of space-time like pop metaphysicians in delirium. We accept that any algorithm can be the key to the universe so long as it sketches a seamless picture. It’s an act of seduction, or maybe hypnotic persuasion. The puzzles tattooed in cryptograms on the walls and rocks tell us how we chase after new obsessions. “WHERE DOES IT END,” one line reads.

We can get totally lost in Fez, following open doorways to weird places and decrypting pixel scrawl and forgetting what we were doing a minute ago. This process of falling down rabbit holes, in both landscape and coded language, is about excavating buried memories of game worlds that once seemed magical: Zelda, Mario, Tetris, possibly Crackdown. But it’s also something less innocent, with a fixation on the occult and a willingness to shoot us from blue skies into black chambers, with music that sounds slightly too intense and bursts of addled psychedelia. We might generously compare Fez to the darkly erotic films of Kenneth Anger, like Lucifer Rising projected and pixelated through a geek lens. If Fez isn’t as artful, being bookended by terrible art-game clichés and sometimes deflated by expressionistic excess, it is more disturbing for the way it transfixes us with pixels alone.

In the loose agglomeration of styles recently dubbed the New Aesthetic, pixelation in art and architecture is read as “the eruption of the digital into the physical.” It’s precisely the reverse in Fez, which as a videogame elicits a rather more focused response. We get off on pixels. We pore over the bumpy surfaces of pixel people and stare at how many individual pixels can make up a tree branch and yet be chasing a hazy approximation of the real thing, never quite enough. We find so perverse and charming the idea that the smallest units of reality are squares, tiny nubs with perfectly straight edges. We don’t give a shit about polygons.

That kink is expressed every time we press the trigger in Fez. “Suck my dick,” Fish tweeted to one person earlier this year, after Fez improbably won its second award in four years at the Independent Games Festival. “Choke on it.” That is exactly what we are doing, made vulnerable. Fish, who also DJs house music, deeply understands how to get a rise out of people. And house music provides a good analogy for his work on Fez. Its steady four-on-the-floor beat is about being sexed by a machine to the point of delicious numbness. The nihilistic pleasure of doing one thing over and over. But also a collective experience that makes everyone in the room a practitioner and perpetuator of the myth. In this case, eager repetition connotes nostalgia—a wish to replay our fondest memories, even if they are imaginary. How decadent pixel art is in the 21st century!

Once we begin to get a handle on Fez, in fact, we find we’re holding very little.

The moments when Fez drops the charade and exposes its cruel heart are when it has the computer take control of the game. This happens each time we enter a doorway and open a treasure chest, and particularly when we reach a new place. The island twirls slowly, deliberately, while the camera takes an agonizingly long time to descend from top to bottom, where Gomez is dormant. Every glowing bit and sandstone block and blade of grass turns in unison, making our retinas feel like they’ve been brushed by magic dust. When we watch the camera ogling Fish’s own creations, ravishing us, we may see the game clearly for what it is. Fez is pixel pornography. The instant we regain use of our hands, we start to work the angles, rotating, trying to uncover the island again, but never being able to, because it keeps slipping apart from our grasp, holding hostage its secrets around each bend, although we can still stumble across promising symmetries, peeking past corners, and sometimes spot a wide opening behind a veil of water, which only encourages us.

This is how the fez enables. It brings us mouthwateringly close to a thing that is immeasurably far away—a digital body that we can spin around as if it were an actual sculpture, but which, if brought into the real world, would implode into a pile of dissociated planes. Once we begin to get a handle on Fez, in fact, we find we’re holding very little. A new mystery is paralyzing us. But it had looked so easy. That expansion and contraction, between fulfillment and flatness, empowerment and impotence, is immensely attractive. Since it has no answer, we’re helpless but to push our red-tipped Gomez further and further inward in pursuit of an end.

It’s appropriate that, as more collaborative energy goes to solving more of its problems, Fez moves from the metaphysical realm into meatspace. It’s also difficult to take the players’ endless tunneling at face value. Most videogames bend over backwards to entertain. This one has unmistakably emerged from the ego. For an interactive piece, Fez stays closely guarded behind the screen—which stands for the gulf between one man’s imaginative powers and our own. It is difficult for us to feel anything other than lust in the face of his creation. At its best and worst, the game is too bright to take in at once, as if hot to the touch, overwhelmed with its color and light and joy, and leaving a curiously indecent afterimage.