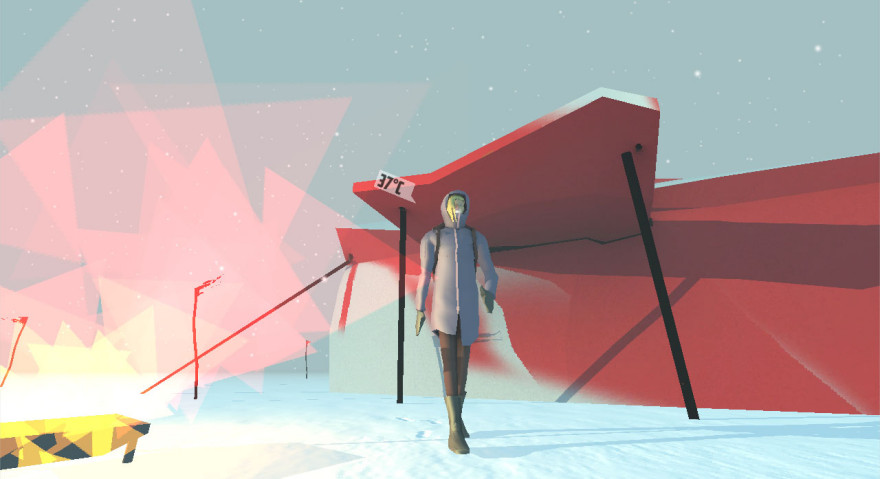 has the ring of a magical place to it. It almost seems weird to have it right here on Earth. It’s this desolate crystalline land with the mysteries of millions of years buried right into its frozen bulk. For seven months of the year it’s too cold and dark for us to travel there. If you do get a chance to visit, usually only a select few are able to get anywhere near the fragile shores, preserving its glistening mysticism.

I hadn’t really thought about like this before having played René Rother’s Ludum Dare 30 entry, Whiteout. The killer whales you can find in the game, half-merged with the ice in desperate frozen poses, illustrate ‘s magical realism. In any other place on the Earth, a sight like this would be bizarre, but here it makes perfect sense.

I was forced into the same desperate solitude as my character.

The whales are actually one of the very few sights you’ll see as you explore the eternally flat surface of in Whiteout. You’re trying to find your partner, Fox, who has gone missing in the middle of nowhere. All you have is a bunch of flags, insulated clothing, and the flames of the campfire to warm you as they blow in the harsh climate.

Survival in Whiteout is paramount, obviously. However, it only serves to temper your exploration. As your body temperature steadily drops when wandering towards the nothingness, you’ll need to guess the point of no return—for me, it was 31 degrees centigrade. It’s the emergent and calculated survival techniques that you acquire while playing Whiteout that separate it from other survival and exploration games.

Importantly, it doesn’t feel forced; the game never explicitly taught me how to survive. Nor did it make like the recent Tomb Raider reboot and imply that I’d use the stars to navigate but, in actual practice, just give me glowing waypoints to follow.

No, in Whiteout, I was forced into the same frosty solitude as my character. We each listened to the wind howling in her hood, the snow creaking with each footstep, and were both blinded by the sun. Our senses are exposed to the same sights and sounds as this character, and it’s in this that some natural survival instinct is disturbed within us.

After a few minutes of solitude with ‘s howls, I was placing flags in logical order behind me in every direction I trod. I was also using both the sun and the shadow it cast to get a sense of direction. While I haven’t found Fox yet I have begun to understand the elusiveness of ; it moves through me like the chill through bones. It’s this that I know will allow me to find him, whether he is dead or alive.