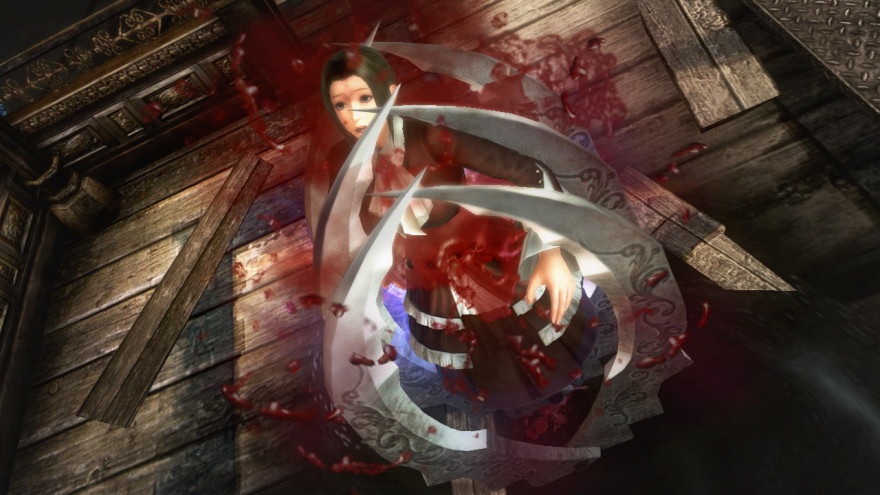 If you loved Deception, you will hate Deception IV: Blood Ties.

If you aren’t familiar with Deception, why would you choose spring 2014 as the ideal time to hop on this train that left the Sony station back in 1996 on the original PlayStation? Because it’s got a hot chick on the cover and more violence than a snuff-film outtake from America’s Funniest Home Videos?

Well, okay—that’s a decent reason. But it’s this sweet spot of confusion, crassness, and consumerism that Tecmo and Sony seem to be banking on for people to buy this update to a dusty old classic—a phrase I say with the warmest and fondest of memories. The first two games were a lot of fun.

Regardless of your familiarity with Deception, you’ll likely need some context first so you can understand why Blood Ties is such a disappointment.

In all likelihood, if you heard of this game coming out you were probably wondering: “Huh? There’s been four of these? Why have I never heard of it before?” Even longtime fans such as myself lost touch with it—the third one, from 1999, wasn’t released but seemingly escaped from Tecmo. (Note to self: Escape from Tecmo might be a great game idea. It should have birds?) I polled my friends who were also familiar with Deception and the consensus is:

On the PSX, Deception was a polygonal gorefest that paired Rube Goldberg-style contraptions with implements of torture. Home Alone-style hijinks ensue with a higher death toll. Adding to the novelty: You played as a female character who led intruders through an evil castle, baiting them into walking right into your traps. It was fun. It was stupid. There was really nothing like it. There was not much else to the series. We didn’t need anything else.

A lot of time has passed since 1996. Lots of games have come out with arguably only a handful of new ideas swimming their way to the mainstream’s lexicon—both in terms of what developers had to say and what players wanted to see. We have conflated fussiness and wrinkles with new ideas, and Blood Ties is indicative of that. Deception never really “popped” and became a mainstream sensation, which was why it’s so intriguing that 18 years—the length of time it takes for a baby to buy a pack of cigarettes—Tecmo saw fit to exhume Deception and bring us this confused rehash.

Confused in the sense that everything’s been exaggerated. Whereas you played as a demon-girl in the first, here you play as a Penthouse pet who struts around in an outfit that’d make all those sexy Halloween Gumbys blush. It goes on from there.

I smelled danger as soon as I popped into the tutorial, which consisted of a handful of screens on which I pressed X. But it’s when the game starts that the tutorial truly begins. You’re in for a few hours of Blood Ties telling you, “Hey, you know what would be fun? Place X trap in Y location, and watch what happens.” If you ignore that request, you’ll find out it wasn’t a request. You’ll be nudged back to being given that suggestion again—your enemy’s health has been magically restored. It was a mandatory hoop you must jump through to proceed. It’s the equivalent of Grand Theft Auto telling you, “Yeah, this is an open-world game, but only if you steal green cars.”

Then again, “deception” is right there in the title. So what was I expecting?

I’m not sure. Not this. Sequels, in general, have the odds stacked against them. So rare does a victory lap in an intellectual property’s world feel necessary or like it adds more to what was said in the first place. That’s why people are skeptical of the forthcoming Breaking Bad spinoff/prequel thingy. That’s why we hated Batman & Robin and why director Joel Schumacher subsequently apologized for that movie’s general crappiness. “I just wanted to entertain,” Schumacher said with fiery hesitation. That’s all anyone in the entertainment biz wants to do, of course, but we all take weird turns on that path. Deception IV is proof.

The correct analogue for Blood Ties isn’t movies but instead storytelling in general. More specifically, the oral history. If you’ve ever played the game of telephone (it’s an über-indie game that’s being re-released on Steam with achievements in Q2 2015), then you know how the intent and content of what someone says changes as it passes from person to person. Forget the fact that Deception started 18 years ago: Deception III came out 14 years ago. This would indicate Tecmo seemingly had something urgent and new to say with the series.

So much of the game early on is about forcing you to play its way: “Hey, to break an enemy’s armor, read up on their bio and find out what they’re invulnerable to, and then string together a series of traps that needle at their weakspots, and then launch them into the air.” Um, no. Don’t make me read shit or stoop to trolling YouTube to find out how other people with more free time have deciphered your nonsense, Deception IV.

These roadblocks keep you from just enjoying the game’s meat as I remembered it back in the day. And who, ultimately, is Deception IV if not for people who remember the original about 20 years ago?

Loathe as I am to quote Wikipedia, but it was the only place I could find this anecdote I remember from years past:

“According to John Glover, who played Dr. Jason Woodrue, “Joel [Schumacher] would sit on a crane with a megaphone and yell before each take, ‘Remember, everyone, this is a cartoon’. It was hard to act because that kind of set the tone for the film.”

Take it from the man who played that classic Batman character, Dr. Jason Woodrue, to speak great truth to what’s been happening to the oral tradition. Joel Schumacher wanted to make good on Batman’s commercial promise, treating his actors like action figures because that’s how they’d merchandise the characters they played. Deception IV looked back and said, “Hey, this is an opportunity to cash in on things all gamers seem to like: Nostalgia and violence. Surely there’s a way to make a quick buck here.”

It might make a quick buck, but it’s also cheapened the soul of what used to be a simpler, less fussy game that was proud to be stupid and gory. (In the ‘90s, no less, when violent games were actually provocative.) This is just stupid, and gory if you do X, Y, and Z. How is that fun?

More to the point: Aren’t there other games that just let you do that? I feel like there might be a few.