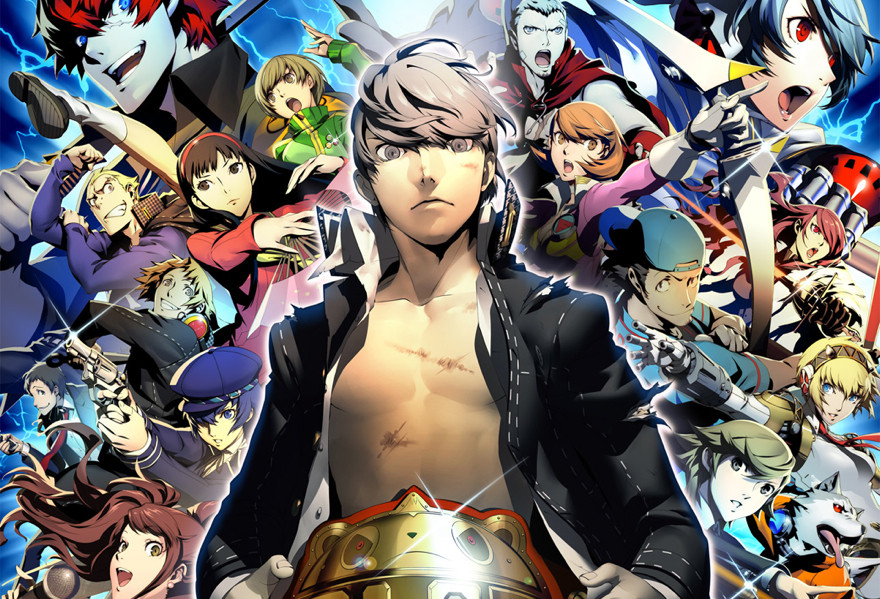 While the traditional fighting game relegates its story to two cutscenes—one at the beginning of a series of matches, and one at the end of a series of matches—the impossibly named Persona 4 Arena Ultimax’s story modes are lengthy, sprawling segments of visual novel smashed up against each other. We are meant to ooh and ahh, easily recognizing the returning cast of characters. They’re all here, and more: eccentric loners, secret sewers, robots, animated bears with zipper necks.

The nostalgia is earned, but only because of the strength of Persona 3 and 4, the games from which these characters hail. Each character in Ultimax is a love letter to their original games, and this makes sense: each Persona game is full of life from every weird angle. People turn into coffins amid bloody streets at midnight. Public deaths are sudden and yet still eerily expected. Teens summon powerful, tarot-based creatures to fight for them by aiming gun-like devices at their heads. Television worlds contain repressed emotions. But meanwhile, within this unreal world filled with contemporary horror there are plots and subplots that evolve from real-world struggles: growing up, teenage friendship, part-time jobs, clubs, and finding out who your soulmate is by gazing into a TV at midnight.

There are plots and subplots that evolve from real-world struggles.

Persona has always been about different types of duality. An insane, twisted world is only insane and twisted in contrast to something else, and it’s this normalcy that serves both as the driving force of the game’s mechanisms but also as a backdrop for an increasingly disturbed environment. Just as the ill effects of a shadow realm eventually enact their change on the people attempting to live through it, so too do those people rebel against that hideous change: by continuing to cultivate friendships and life skills, characters are able to fight more proficiently. We, as players, move through games like Persona 3 and 4 not to see those characters as static beings but dynamic vessels of growth. The delight is in navigating a story where our protagonist creates and strengthens bonds with these characters now present in Ultimax; that these bonds then help us maximize our RPG prowess as we explore a new world and new relationships is nearly secondary, like the whipped cream on top of a cake that is made of TV static and also bleeding.

But where Persona’s narratives are usually sprawling odysseys filled with growth and weird discovery, Ultimax is like a greatest hits compilation that doesn’t recognize what makes the original games so engaging. Once that initial nostalgic burst wears off, there’s not much narrative left. Which is insane: here is that same setting filled with a dark world and evil doppelgangers, red, bloody fogs, warped roads, and a massive spire that erupts from the town’s high school. This is nothing new in the context of this series: not to the player, nor to the characters. But the game attempts to treat it all as such, forcing the player to sit through scene after scene of a different character showing their surprise to these wacky developments in a world where, not one week earlier, they were forced to fight inside of a television. Meanwhile, through so much dialogue, relationships don’t change, and neither do any of the characters, really. They’re never given the chance; they move on rails through predictable developments, left reduced to even more concentrated caricatures of themselves designed only for combat, like some sort of Justice League without any of the personal stakes of the original titles.

And if it weren’t for the game’s absolute focus and the obvious importance of the story mode I could be convinced that the thin characterization was some sort of meta-commentary on the genre. But when all’s said and done, the story spans hours of reading, advancing dialogue, and watching the occasional cut scene, all punctuated by a handful of single-round fights. The fighting is secondary here, which is a shame, because when it unfolds, it does so seamlessly. Arc System Works (of Guilty Gear and BlazBlue fame) have created a compelling fighting game that feels true to the characters involved, their personas, magic, and status effects translated flawlessly from the RPG. Yet they’re such a minute part of the main thrust of the game: this setting, this story that could easily have been condensed into a 30-minute short with a single adage: friendship is still magic.

But Persona 4 Arena Ultimax is two games, and, like Janus, its two games are two faces. The fighting game is the one that looks to the future, and it does so by offering a bevy of features meant to guide the beginner into a notoriously difficult-to-learn genre. Auto-combos allow the player to tap one button to pull off multi-hit moves that truncate into cancels. Instead of futzing with directional inputs, the player can hold down a button to charge up a special move before releasing it. Different colors of exclamation marks appear to instruct the player in situations if they can perform a throw escape, if a move’s unblockable, or if they’ve blocked incorrectly.

This story could easily have been condensed into a 30-minute short.

Aside from the incredibly explanatory tutorial of Skullgirls, these features amount  to the largest olive branch offered by a fighting game that I’ve ever seen, and it’s a godsend to jump into a game and be able to perform flashy combos, even if at a damage penalty. And it’s clear why this should be here, in Ultimax, of all games, because it does, in some quantity or another, cater to the RPG fan, and not exclusively the fighting game fan, who knows all the combos and is intimately familiar with all of the systems. Of which, by the way, there are a staggering amount: the interface is cloudy with different aspects spread all over the screen: aside from your basic health bar and super meters, there are cards representing Persona uses, capitalized words that pop up to indicate move readiness, and even character-specific systems—such as a gun chamber or a baseball score board—which continue to elude me.

The fighting game is surprisingly robust for something attached to an unending story mode, which, unfortunately, is the face that looks to the past. It’s easy to believe that this is a nostalgia that is positive, but it’s something else in practice, because even though this game is ostensibly for Persona fans—and I’m still not sure I believe that—what they get is bound to be disappointing, because it’s essentially a multi-celebrity cameo that forgot who the stars were. Instead of following a crunchy story, we as players—or really, readers/button advancers—are subjected to different characters going through the same situations over and over again, one after another, until they finally all meet up and climb a tower. Aside from the new antagonist, there’s no development, just a complete rehash of all of the personalities we already knew, their relationships set in stone and abused further to squeeze some last remaining drops of fan service.

The fighting game here is fun and engaging, but its wrapper is so, so flawed. And when it comes from such a renowned series, is drawn up out of the same blood that made it so renowned in the first place, it’s that wrapper that really matters. That wrapper is what’s going to make this game make its way off the shelves/cloud and into a disc-/hard-drive. The candy’s good, but it’s not really what we’re all here for, what the game claims we should be here for. The truth is, Ultimax’s fighting system could have been skinned with any set of characters and it’d still be enjoyable; it just so happens to be targeted at people who are going to come for some of the magic of the Persona series, and ultimately leave even hungrier than before.