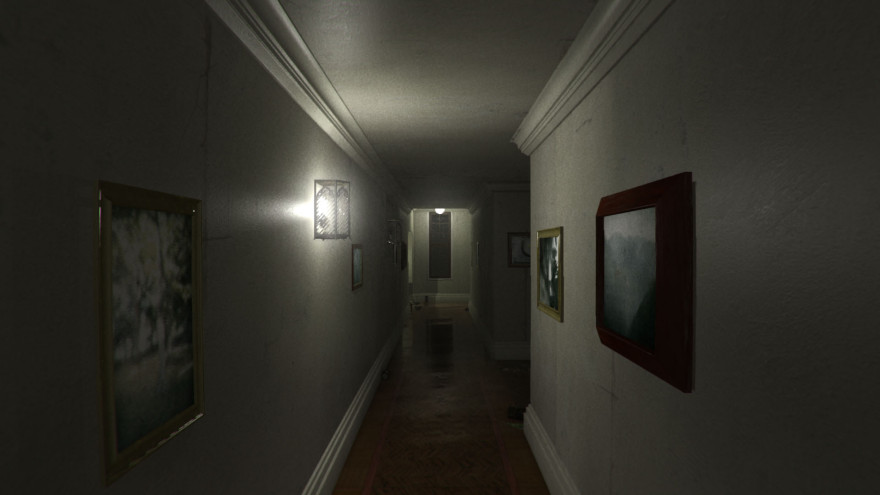 A corridor out of focus. Off-white walls, familiar photos, and a familiar bend up ahead. Clock reads 23:59. Like always. Yes—it’s that goddamned hallway again.

Hideo Kojima and Guillermo del Toro’s sinister Silent Hills teaser P.T. has been remade in Unity, charmingly called PuniTy. Its creator, Farhan Qureshi, only intended to render the eerie L-shaped passage for a 3D modelling workshop, but ended up creating a compact P.T. experience all of his own.

a towering figure standing crooked in the corridor

So many of the little details, from the twisted blister packs and miscellaneous pills littering the end table, to the lighting, depth-of-field, and slight camera wobble, are captured in PuniTy. Even Lisa is there—a towering figure standing crooked in the corridor. (Sadly, no Eraserhead baby.)

A staggering 104 hours over a four-week period went into this recreation. You can read all about the process on Qureshi’s blog, where he discusses everything from texturing Lisa’s ratty, blood-stained garment to animating cockroaches so they skitter around like real bugs. What a pleasant game P.T. was.

One of the most interesting parts of the process is how Qureshi layered in-camera filters to most accurately capture the look and feel of the original work. To folks familiar with game development, it might seem like an obvious design step, but for those who aren’t, it’s a good look into how even the most minute details can have an incredible impact on the feel of something.

it denies you that moment of relief

The visual effects added, in order, are: screen-space ambient occlusion, noise and grain, fisheye, chromatic abberation, global fog, screen-space antialiasing, dynamic depth-of-field, and flares. One step at a time, you can see what looks very much like a typical Unity prototype transform into a visually-loyal tribute to one of the greatest horror games this decade.

Making a game is hard work, though. There are no doorways to interact with in PuniTy as there were in the original, so the looping hallway trick manifests in a different way. This time, you’ll have to walk from one end of the L-shape to the other, and then turn back and do it again. It does detract from the feverish nightmare element of P.T. that made the original hallway so ominous, but for a fan creation made in a month, this is still incredible. In a way, the constant creeping back-and-forth between doors is even more exhausting than the original, because it denies you that moment of relief that came from unlocking the door and coming back out the other.

Maybe one day Konami will decide to put P.T. back on the PlayStation store. Maybe Kojima and del Toro will partner up for an entirely new horror game experience. But until then, videogames have its most dedicated and talented fans, putting in scores of sleepless nights just to recreate a single moment in that most menacing of hallways.