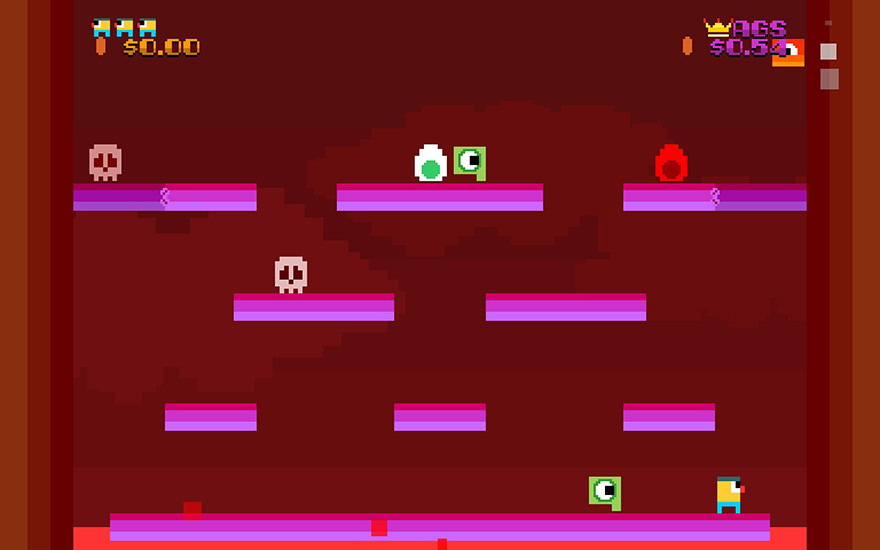 Woah Dave! is an arcade game. I can’t stress this enough. The icon that spins on your 3DS home screen is that of an upright arcade cabinet, circa 1982, with Woah Dave! iconography on its side, a cathode-ray tube monitor set in its casing, and a joystick and two buttons for controls. Once you select the game you might as well be standing at that same cabinet. Select a new game and the sound of a coin chimes. That we once stuck quarters into slots of a vertical machine built from plastic and glass to play a videogame feels almost vulgar; the same head-shaking no doubt took place in children of the 80s, with their superior VHS technology in hand, watching their parents thread their Super 8 tape onto a reel-to-reel projector.

Yet how we yearn for such vulgarity. Woah Dave! taps into a style of arcade game nearly non-existent today. You have all you need from the very beginning. You will not be stripped of your powers. You will not earn any more. All you can do is move left and right, jump, and throw. Your skills accrue not through intangible “experience” but the experience of playing over and over again. And you will play again, and some more after that, because everything you seek is right there in front of you.

There is only Woah Dave!

The world is a single screen. There is no scrolling. There is no overworld or underworld, or hidden caves or negative space or chicken encased in brick. There is no water level. There is only Woah Dave!

The playable environment is a series of platforms laid out very much like the original Mario Bros., the one with the “POW” block. According to the title screen, you control a man named Dave Lonuts. But your avatar is a small non-specific organism—it could be a chicken, or a baby raptor, or a small child. All you are, really, is a yellow square with two stubby legs, a nose, and an eyeball. You begin alone on this strange playground of pink surfaces. Then what appears to be an egg falls from the sky. Soon the egg breaks apart and another square organism appears. It’s green and waddles slowly, not attacking you so much as tottering forward like a wind-up toy.

Then another egg falls. If you walk over the egg, you automatically pick it up. Throw the egg at the small green waddling thing and it dies, or disappears, or implodes—the lore is vague. A small bronze coin is left for your efforts. Walk over the coin and you add it to your bank. This process repeats with subtle variation, your wealth slowly accumulating as you continue to destroy just-born creatures with no free will. The point of Woah Dave! is to last as long as you can and earn the highest amount of money possible.

After an hour of trying, the best I’ve done is $1.37. Each coin is literally a penny.

The systems in place are not, in fact, all that simple.

What keeps this simplest of games engaging is that the systems in place are not, in fact, all that simple. The bottom floor, for instance, slowly disintegrates toward the center. Below this is a pool of lava. If a green waddling thing falls into the lava, it ascends to the top of the platforms, now an evolved form of its former self. Now it’s a bright orange running thing. Fail to destroy this creature before it falls into the slowly growing lava pit and it evolves again, this time into a purple thing that hops. Let the purple hopper evolve once more and now it’s an eyeball with wings, ever-hovering closer and closer to you until you finally kill it with an egg.

But eggs are not the only object that falls from the sky. Glowing skulls, too, rain down from this poor planet’s atmosphere. These will not break open into enemies. Instead the skulls flash and explode. A blue block inscribed with the simple, satisfying word WOAH also falls onto the platforms, and, in the great arcade tradition, if you pick it up and toss it against the ground, the WOAH acts as a Smart Bomb, decimating the screen’s enemies and showering Dave with coins.

I thought I’d figured out the trick: Just keep tossing eggs into one corner and throw a skull into the pile, wiping out each before they crack open. But I soon realized the more evolved an enemy is, the more pennies its death is worth. Do you snuff out the green waddler for a measly one cent? Or let it roam free, eventually turning into its full form when you’ll net a sweet $0.04? Greed trumps reason nearly every time. Soon there’s green things plodding underneath while orange things dash past and a purple thing hops overhead. The floor continues to shrink. An eyeball hovers near. Touch anything and you die. Don’t toss that egg soon enough and you die. That skull you picked up? It’s about to explode.

Dave has three lives. Exhaust each and count up your booty. Seventy-four cents. A buck even. Maybe you’re really good and you rack up a dollar-fifty, unlocking the higher difficulty level simply titled “BONKERS.” Exceed the highest of your ten scores and be granted temporary immortality in the form of three little letters: Your high score initials. The Steam version features online leaderboards, but there’s something uniquely satisfying about conquering a place and etching in your name. Leave out your 3DS with Woah Dave! installed at your peril; if the score list is soon littered with “JCI,” you’ll know I was there.

I’m going to stop writing this review so that I can play more.

Woah Dave! is the simplest game I’ve played in a long time. It’s also the most compulsively sinister. I want to play again right now. I’m going to stop writing this review so that I can play more. But did I have something else to say? Was there another metaphor hiding somewhere under the lava? Might I have pondered two seconds longer and evinced some profound and noble truth, revealing the game’s full depth of generosity and love and—