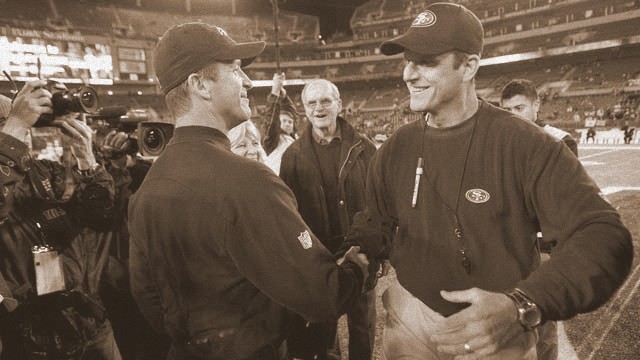 For those sports fans among us, last weekend was either a triumphant comeuppance or a tear-soaked binge of despair. The San Francisco 49ers beat the plucky Atlanta Falcons, and the Baltimore Ravens defeated the strangely-uninspired New England Patriots. And 80% of the media coverage leading up to the Super Bowl will no doubt focus on two people who don’t even touch the football. John and Jim Harbaugh, the head coach for the Ravens and 49ers, respectively, emerged from the same womb.

Put less graphically: They are brothers. And they are out to destroy one another.

Ah, the sibling rivalry. Kane and Abel began what has been a long history of dramatic tales of filial bonds clashing with professional obligation. Napoleon was so hostile toward his brothers and sisters that only one, fair Pauline, visited him during his reign as Emperor of France.  Joseph and Jacque Montgolfier’s heated relationship spurred each other on to pioneer hot-air ballooning in the mid-18th century.  The Olsen twins probably didn’t love sharing the spotlight as Michelle Tanner. Brad Pitt has a brother, and his name is Doug. I’m sure I’m forgetting a few.

But what of the games industry, full of crunch-times, cacophonous cubicles and crushed dreams? Of meteoric ascension and sudden collapse? Surely a few family members have clandestinely sparred through the writing of hidden code, or barked publically about the other’s lack of hygiene? And yet I can not think of many well-known pairs who both participated in the field concurrently.

The most notable siblings that sprang to mind are the Follin brothers. Mike, the eldest, paved the way as a programmer in the mid-80s working on the ZX Spectrum for Insight Software. Tim and Geoff followed him shortly thereafter, joining him at Software Creations where the latter pair would go on to compose some of the most heralded scores of the era, from the Commodore 64 to the SNES, even working on the Dreamcast version of Ecco the Dolphin. Tim and Geoff’s soundtrack for Solstice on the NES is an especially ripping tune. But the trials of development (and brotherhood?) were a burden. Nate Andrews explains how,

After a brief stint at Malibu Interactive, the brothers largely removed themselves from the industry. Mike became an ordained minister within the Church of England, Geoff taught at a primary school, and Tim, having worked as a freelancer for several years, chose to step away from video game composing, citing the irregularity and general undependability of the work.

But where are the other brothers and sisters, trading banter and pushing each other to achieve new heights? Perhaps the pseudo-science of birth order can help here. Dr. Kevin Leman, in his book The Birth Order Book, examines how the timing of our birth helps mold our futures.

Because the family dynamic changes with the addition of each new member, every child is essentially born into a different version of the same family. Your personality and behavior are determined by the unique interaction that takes place between parent and child and among siblings.

Work on games, though inherently collaborative, can also be isolating. I wonder if there’s something about game development itself–all that time alone in front of a screen–that divides family members from the outset. Let’s take the Follins. Mike was the first-born, the doer and the one to pave the way.

But middle and younger children are often seen as the more creative or unique of child sets: whereas the middle feels a lack of attention, thus inspiring a surge of accomplishment to attrack notice, the younger one is given a longer leash, can experiment with less risk of push-back. Geoff and Tim’s luminous careers in game music attest to a drive created, at least somewhat, by the shared vision of those closest to them.

This is all just conjecture; I couldn’t reach any of the brothers for comment. But the apparent lack of siblings in gaming struck me as curious, and worth wondering aloud about. Where are the Harbaugh Bros. of the games industry? Let us know if you agree with the hypothesis, or who all I’ve missed.