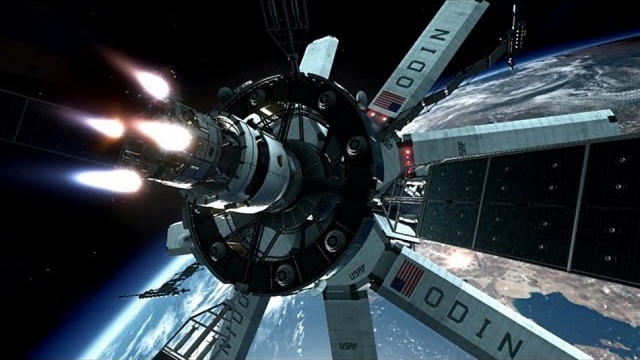 I loved Alfonso Cuarón’s space thriller Gravity for many reasons, but there was this one ineffable quality that kept nagging me throughout. It was as if the film kept whispering to my game-laden brain: “You’ve seen this before.”

It wasn’t the destructible environments or the first person sequences or the deliberate long takes. It was, well, something else.

Cuarón may have accidentally revealed what I was feeling in an interview in this month’s Esquire. When asked about his thoughts on TV, he responds:

It’s seldom that you find great moments in television. Usually you remember—in Breaking Bad or any of these other great shows—you remember situations or characters. Not moments. But I have to say, I can make the same argument for mainstream movies, which have bad narratives and also no memorable moments.

His assessment of Breaking Bad is mostly true. When I reimagine that show’s run in my head, it’s an amalgam of conversations between Walter, Jesse, Skyler and others set against a pastiche of the empty American Southwest and a smoking Winnebago. It’sa  marvelous blur, but not one contain of a “moment.” (Perhaps Walter’s exhortation “I am the one who knocks” comes closest to a series pivot.)

Cuarón is using the juxtaposition to outline how great television has mass appeal, something that has sadly been lost in the world of film. But it also speaks to his obsession with this idea this his films should be punctuated with sequences that will linger, not be lost in the blur. Gravity has quite a few, as did Children of Men (that legendary longshot being one of them). And of course, there’s the final desperate sex scene from Y Tu Mama Tambien.

(FWIW, Cuarón has an odd, unexpected admirer in Call of Duty: Ghosts, whose single player campaigns are entirely comprised Gravity-esque moments, and not just that outer space sequence.)

What fascinates me is the possibility that games have the ability to do the best of both television and film. Games have already mastered the art of the spectacle, and so many titles through the years can be encapsulated by a single defining moment. Your discovery that Chell in Portal is a woman, the end of BioShock, Link triumphantly hoisting a Tri-Force.

And of course, the promise is that as character development grows in importance and quality in games (see titles such as Gone Home or The Walking Dead), we’ll have a medium that harnesses both the bigness of film with the quiet pacing of TV.