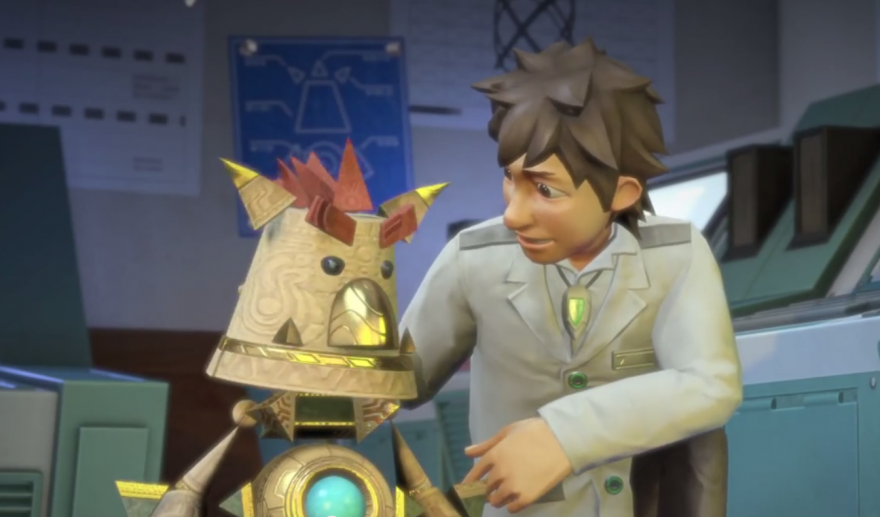 A confession: Prior to the writing of this article, I had never heard the name Mark Cerny. So when I first played KNACK, Cerny’s first effort in years as something other than a consultant, I couldn’t quite place the nostalgia it evoked because it wasn’t exactly my own. I grew up a Nintendo kid, as the saying goes—the most I saw of Crash Bandicoot or Spyro was in commercials on Cartoon Network and during occasional play dates with Playstation kids. So it inspired that feeling in me—nostalgia’s obnoxious cousin. That “I know I’ve seen this somewhere” feeling, always accompanied by a furrowed brow.

It’s definitely the kind of game I would have wanted solely because of a TV commercial. The titular character is a shapeshifter, composed of ancient artifacts that allow him to integrate battle-born debris into his body. In another time, this would lead a kid to decide between the cute KNACK action figure and the macho KNACK action figure. The gameplay is simple and approachable: a platforming beat-’em-up, a genre whose heyday ceased around the time hardware designers realized that joysticks could be buttons, too. And everything—everything—is colorful.

It’s surprising that gamers’ response to KNACK has been so tepid, especially considering Cerny’s tenure. Perhaps many of them just don’t know who he is, as was my case. After all, no kid cared about who designed which characters, or what company distributed which game. Mario was Mario, Crash was Crash, Sonic was Sonic (if you cared about Sonic around 1996). We were oblivious to staff changes, company mergers and acquisitions, and other such fluctuations within the industry—even though they determined the fates of these characters and their worlds.

It’s definitely the kind of game I would have wanted solely because of a TV commercial.

Take, for example, the 90s cartooning renaissance. In the post-G.I. Joe world of 90s cartoons, Turner Entertainment, owner of Cartoon Network, bought the legendary animation company Hanna-Barbera. Not only did they acquire the rights to the Hanna-Barbera name, but to their entire library of cartoons. New talent was brought in to create new properties under that name—which led to Dexter’s Laboratory, Courage the Cowardly Dog, Johnny Bravo, and so on.

However, it also led to a slew of reboots wherein animated mascots of the 50s and 60s were dusted off and propped up for a new decade. The results of this mass necromancy—among them Tom & Jerry: The Movie and several inexplicable holiday specials such as Yogi the Easter Bear—are, for the most part, either forgotten, reviled (mostly by animation scholars and internet celebrities), or the butt of ironic jokes. But if you were a Cartoon Network kid, rather than a Disney or Nickelodeon kid, you watched them anyway.

Much like gaming, animation is still a young medium. The cable TV boom changed animation forever, allowing countless up-and-comers to break and rewrite the rules of the medium that raised them. If Mario is our Mickey Mouse, then the gaming mascots of the 90s—Crash Bandicoot, Rayman, Banjo Kazooie, Earthworm Jim, and so many others—are the many Warner Bros. and Hanna-Barbera characters flourishing in Disney’s wake. Revivals of these mascots have been hit or miss (see Rayman and Banjo Kazooie, respectively). Like the young newcomers that preserved the spirit of Hana-Barbera in the 90s, the current indie boom is the work of those who grew up with classic animation mascots.

When Cerny was asked in an interview whether he could see KNACK as the PS4’s mascot, he responded:

“I think we’re well past the era when mascots exist in video games. Even with Crash, we were already moving out of that era. Crash was the top selling brand on the Playstation and not its official mascot. A lot of it has to do with [the fact that] we’re getting older and want to play games with more mature themes.”

With the oft-noted overabundance of military shooters today, you might say gaming is at the peak of its jingoistic GI-Joe phase. But does our desire for maturity mean the death of mascots and cartoony characters? Not necessarily. Many gamers have dismissed KNACK because it’s intended “for everyone in the family.” But like any quality cartoon—whether it’s Miyazaki, the Animaniacs, or Adventure Time—KNACK isn’t written for the sole purpose of pleasing kids.

Like its titular hero, the game mixes bits and pieces of aesthetic stylings and cultural tropes from its eastern and western counterparts to form its whole. Any discerning animation geek will see its Jonny Quest parallels: there’s a renowned scientist who also studies ancient cultures, his wet-behind-the-ears son (adopted, in this case) and their bodyguard. KNACK himself seems to be a mix of the final two members of Quest’s crew: the pet and the mystical foreigner. (And of course, there’s a double-crossing profiteer.)

It can occasionally be tough to attribute ownership of KNACK’s disparate aesthetic influences to its western director or its eastern developers, Japan Studio SCE. But like the scattered belongings of lovers sharing a bedroom, ownership ceases to matter. KNACK’s human characters appear overtly western, with bulbous noses, jutting jaws, and rounded fingers; but KNACK and the goblins alike bear the distinctive fangs of kabuki demon masks.

KNACK himself eventually towers over buildings like a kaiju beast—or, perhaps if you’re more familiar, just like the Iron Giant.

KNACK himself eventually towers over buildings like a kaiju beast—or, perhaps if you’re more familiar, just like the Iron Giant. The tropes become universal. The profiteer inevitably seeks to use the artifacts that compose KNACK for his own ends, and it doesn’t matter whether this reminds you of Weyland-Yutani or the god-killing industrialists in Mononoke-Hime, or which McGuffin the artifacts make you think of first—Unobtanium; the red fabric in Journey; the crystals in Disney’s Atlantis, or the crystals in every Final Fantasy ever.

What matters is that the team behind a game like this will likely catch all of those references. The cartoons of the “90s renaissance” were great because they were labors of love, from animators who grew up on the greats. The reboots were unsuccessful for the same reason the recent Smurfs and Yogi Bear movies are vinegar to adult and critical tastes; the characters are there to move merchandise. John Kricfalusi didn’t act as the puppeteer to Bugs Bunny’s corpse; Ren & Stimpy was an odd tree he grew from the soil of Merrie Melodies.

Maybe KNACK can’t be the mascot for his home console, but he could certainly be a frontrunner for countless small teams—teams that pay homage to their mentors as excitedly as a kid who invents his own cartoon character with a crayon and construction paper. So what if it has Mickey Mouse’s ears, carries Link’s shield and rides the Bat-pod?