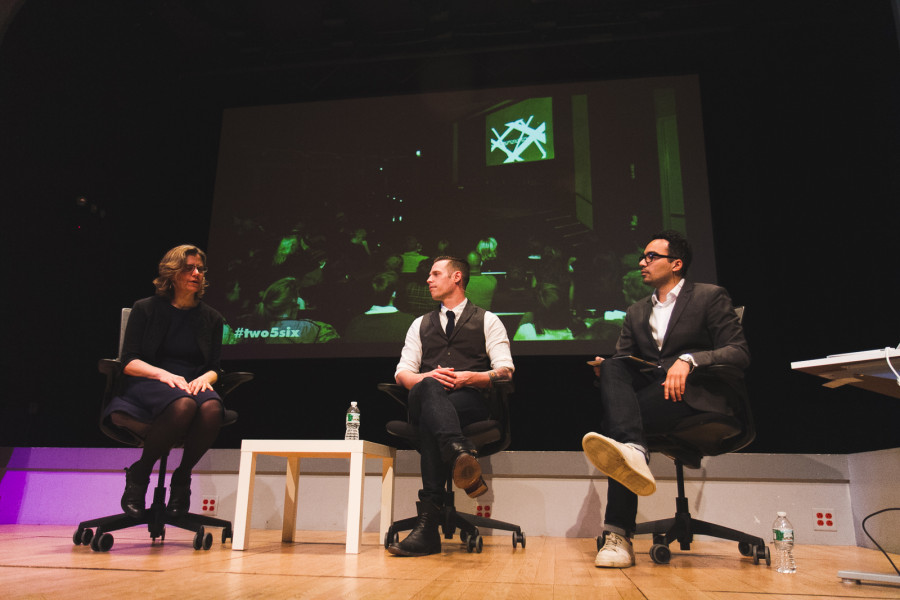 The second annual Twofivesix conference, Kill Screen’s day-long set of conversations between industry leaders in and outside of games, is happening right now. The first session brought together Johanna Zorn, co-founder of Third Coast International Audio Festival, thought of as the Sundance of Radio, with Patrick Balthrop, a sound designer who’s worked on Rock Band and the Bioshock series. Ten minutes after their talk “Stories in Sound,” began, I walked into the balcony and clanged my umbrella against an aluminum doorframe. That reverberating clatter told a story of lateness and interruption. I only hope the speakers appreciated the example.

Balthrop understands how surprising sounds can help or hinder a project. “Early in my career,” he said, “I thought sound was objective.” He soon realized his narrow definition limited the tools at his disposal. For a level from Bioshock Infinite set in Paris, Balthrop used the song of a North American bird. A developer noted the discrepancy and asked him to change it. Balthrop fought for the sound, even though it didn’t make geographic sense, because it fit the moment. “Sound needs to be designed,” he said.

As evidence, Jamin Warren, co-founder of Kill Screen and MC for the day, queued up a clip of horse-racing on television. That sound of clomping thoroughbreds we hear while watching the Derby? A buffalo charge slowed down and manipulated by Dennis Baxter, sound designer for the Olympics since 1992.

Zorn’s experience in radio is a bit more intimate. When asked how sound people talk to one another, she explains,“You’re the designer [and] you’re the reporter, like a one-man band,” she says. “You’re talking to yourself.” Zorn is used to working with independent artists crafting personal stories. Rewards are emotionally high but monetarily low. From a collaborator’s standpoint, Zorn explains, this is a good thing. “Because no one makes any money, everybody shares.”

Whether the market knows it or not, sound is a rare and valuable commodity. “You can search for something on Google Image,” Balthorp says. “But what does it sound like?”

Zorn chimes in: “What does it feel like?” Neither answer is readily available without the work of sound designers. “Google doesn’t do that,” Warren says.