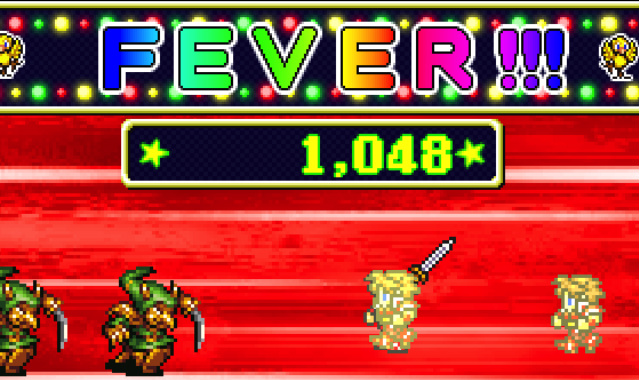 Final Fantasy All the Bravest released for iOS last week. The game is a boiled-down experience of nothing but RPG combat. If turn-based battles were your favorite part of Final Fantasy but the story, relationships, exploration and sense of adventure got in the way… here’s your game. Our old editor Joe didn’t like it very much. Neither, probably, did you.

But the release of a major franchise reduced down to such a simplistic version portends an ominous, or at least more efficient, future.

With this and last summer’s Theatrhythm: Final Fantasy, a music-rhythm game highlighting the best of the series’ twenty-five years of sounds, Square-Enix has established an intriguing precedent for the industry’s immediate future. Triple-A blockbusters are becoming more expensive, with more burden on unrealistically high sales for a company to make back their investment, let alone turn a tidy profit. But what if the risk was spread across multiple, smaller games, stripped from the larger experience?

We see this already with post-launch DLC giving players a reason to buy more content for what are essentially level- or mission-packs, using the same engine and parts already paid for by the developers. But what if the full game is sold in packs? Enjoy the music? Here, have a music game. Enjoy combat? Take this fighting game.

Many mobile games already ask you to pay intermittently throughout the experience to unlock and see the whole thing. Square-Enix’s treatment of the Final Fantasy series as fodder for smaller, more consumable games, sold to a wider audience with less time to devote to 80-hour epics, might suggest a future of games we buy, and play, piecemeal.

If resources are directed away from full-scale experiences toward their more feeble counterparts, this would be a shame. But I, for one, welcome the option.

Having arrived to RPGs late in my life, I now don’t have the time nor inclination to sink dozens of hours into each mainline Final Fantasy game retroactively. Instead, I’m playing through Theatrhythm. I’ll get to experience the same great music (minus the context, sure) and play a genre I actually like! Plus I’ll save about 1000 hours.  Call me a heathen if you must. I’m still open to change; certain game’s themes have already made me want to check out the real deal (Man with the Machine Gun, you slay me). But for right now, I’m content listening and swiping and distributing my play-time elsewhere. For me, that’s all the Fantasy I need.