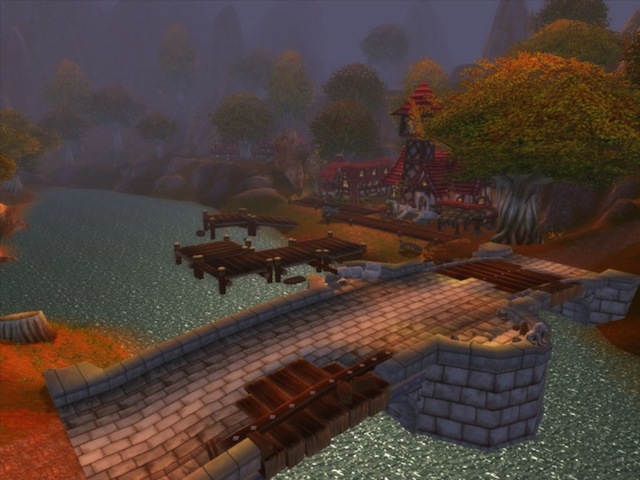 We always met at Lakeshire, right next to the broken bridge. That was the constant. We landed in Lakeshire, propped up our mounts, and bullshitted with the guildees until it was time to go. Blackrock Mountain was about five minutes away, and it was dangerous to go alone.

For the first few years of World of Warcraft’s venerable lifespan (the newest expansion to which, Mists of Panderia, was released this week) Blackrock Mountain was the epicenter of all end-game content. It could only be adventured by the most dedicated players. After you hit 60, and you couldn’t level up anymore, you were offered a significant ultimatum. You could start another character, skirmish in the then-nascent PvP system, perhaps cancel your account altogether. Or you could unite with 39 other people and embark on huge, ambitious, and undeniably austere raids – working in unison to topple the most menacing, (and the most remote) monsters in the entire game. In return you earned glory, prestige, glowing pieces of armor, and an undeniable sense of electronic brotherhood.

Culturally, philosophically, mechanically and even geographically, World of Warcraft is a much different game than it was six years ago. Almost all of these changes are for the better. Instead of needing 40 guild members, today’s raids can be completed with 10 or 25 people. You can enter a queue that will automatically form a group and teleport you right into the dungeon’s doors. Everything that was slow and inefficient about World of Warcraft’s original incarnation has been acutely optimized. The last expansion, Cataclysm, literally redid every old zone in the game – adding new quests, new graphics, new characters, and new story.

These updates have been smart and precise. But we do not meet at Lakeshire anymore.

The old guard is not happy. Most of my friends and former guildees have moved on, or log on so seldom it’s curious why they keep shilling out the $15 a month. They burnt out shortly after Cataclysm; we’ve pierced through the most notorious mysteries of the world. Cataclysm reshaped the old lands. That broken bridge in Lakeshire? It was all patched up and looking brand new.

When we do talk, we talk about the good old days. The new content doesn’t connect with us in the same way. Not that it’s bad. I’m sure plenty of newer players love it, but to us it doesn’t feel as warm. We like to talk about Blackrock Mountain. We talk about jumping into the lava when we knew we were overmatched, we talk about the dumb things so-and-so said, or the time such-and-such dropped.

It speaks to the power of World of Warcraft’s design that these imaginary landscapes can hold such potent emotion. That semi-grown men can get almost misty-eyed about stuff that has never actually existed. But walking into the heart of the mountain, through those giant cast-iron doors, felt all too real. I grew up in here. It’s where my friends lived, it’s where I was a hero. These mystical, dangerous, impossible environments are as close to my heart as my hometown, I can’t help being nostalgic.

These updates have all been smart and precise. But we do not meet at Lakeshire anymore.

I don’t play WoW much anymore. I still have an account; it’s been there from the start. I’m older, I’ve already had plenty of adventures. I’ve been here too long. The most colorful memories of my WoW life directly coincide with when I was young enough to believe my own bullshit. But sometimes when I’m feeling particularly unhinged, particularly poetic, and particularly dorky, I log on to my eldest character, and fly my way to Lakeshire. I make the same climb, over the same roads, next to the same scenery, I walk through those doors and I bask in Blackrock Mountain’s soul.

How wonderful, that kids like me all across the world, were able to exist in such a glorious fantasy? Yeah it doesn’t feel like my game anymore, but the very fact that I made my own history to romanticize is one of a kind. This wasn’t the borrowed legacy of Marston or Shepherd. Blackrock Mountain was my story.