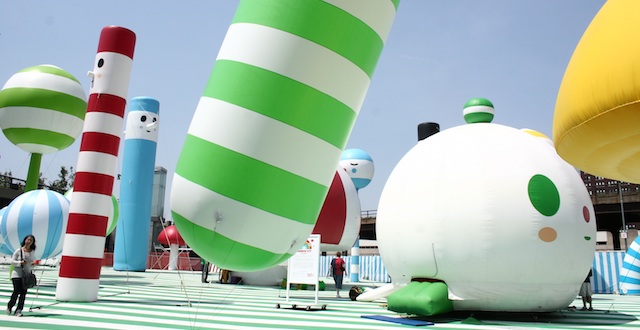 Sam Borkson and Arturo “Tury” Sandoval are co-founders of the Miami-based arts collective FriendsWithYou (FWY), whose work has ranged from creating a line of plush toys to collaborations with N*E*R*D and, most recently, Hello Kitty. This summer FWY staged Rainbow City, a 16,000-square-foot playground—made up of 40 enormous, surreally vibrant inflatable sculptures—on Manhattan’s High Line park. We chatted with Sam and Tury about the connecting power of play, hacking smoke machines, and playing Dr. Frankenstein with G.I. Joes.

Sam Borkson: All of the above.

What inspired you to move into designing public play spaces?

Tury: We always wanted to make things for the many, not just as designers but as artists. We felt that art should be more democratic in how it was distributed. Our first art project was then Ttys—amulets—that we distributed and sold for a moderate amount, and that were done by hand as art. From there we always wanted to make things that were bigger and even more impactful. You really have to wow people to grab their attention, and public art is a good place to do such a thing.

Sam: We love to play; we love to make art that opens peoples’ minds and lets adults play as well. We really like to make ideas with a story, and to create things that allow for all type of play and adventure.

In particular, what were some of the inspirations for the design of Rainbow City?

Sam: We were inspired by Holi, a Hindu festival that celebrates the coming of spring. We like to create striking and theatrical play environments with monolithic structures that bewilder the visitor and create a sense of awe and spiritual magic that connects people through play and observation.

Tury: Another key ingredient was that we wanted to make something that was highly interactive. At one point we really imagined the installation spilling colors into the viewers, and we worked for months trying to modify smoke machines to spill out colored smoke. We wanted to modernize the very impressive ritual that is Holi and give it an element of play and modernity that Westerners would be more inclined to assimilate within their comfort zone.

“Any place is amazing for play, if you’re in the right frame of mind to play.”

Are there any other ritual acts that you’ve borrowed from to create play spaces?

Sam: What makes these rituals particularly ripe for designing play spaces? It’s more about connecting people to each other, creating a place for people to go and feel at peace and be inspired by the beauty. We love simple and colorful worlds that let you go wild and play like you’ve never have been able to. We like to include adults to evoke the childlike magic within, and reconnect adults to that spiritual force inside them.

Tury: We have borrowed from both of our backgrounds plenty. From Sam’s Jewish background and from my Afro Cuban (Yoruban) background, as well as many other folklores like Shinto, etc. But it goes beyond that. It’s really our coming to realize that all these rituals and all these systems aim at the same point inwards, toward the true center of our holiness; that we are the universe and vice versa, and that [rituals are] all just different human manifestations of the truth that we all know in our collective subconscious. That is why we feel free to mix and match a lot of these influences, and add our own little progression on this continuous motion that is both social and, by definition, slow-moving. We feel that these spiritual rites of passage and rituals need to be made more accessible, and these public acts of play are our attempt at starting this conversation.

What are some of your favorite public play spaces right now?

Sam: The beach is the most relaxing, fun play world ever.

Tury: Any place is amazing for play, if you’re in the right frame of mind to play. That is our one of our crucial missions in our work: to instigate play as a way of connecting people, as well as a tool to relax the mind into a purer state of exuberance without reason. It’s like a shortcut to purity, to a state that has long been lost in the many layers of the inconvenience that is our consciousness.

What was your favorite playground when you were a kid?

Sam: Growing up in Miami, nature is kind of your playground. Playing in the canals, in the parks, and at the beach were the best memories ever.

Tury: I grew up in Cuba. We didn’t have playgrounds. But the parks and the city itself were an amazing playground. I was lucky enough to be able to roam the city free until late at night without worrying my parents. That made for some intricate ninja bicycle gangs and tree-climbing competitions at night that are still epic and vivid in my memory.

What was your favorite toy when you were a kid? Do you still have it?

Sam: I really loved playing with toys in a very different way. I would take a bat to my G.I. Joes and then collect the pieces and melt them together with my little night lamp, making melty monster sculptures. Also, videogames were super-fun.

Tury: I had this music box that I was obsessed with, and this Russian balancing doll that was amazing. I have a similar one now but the original is gone. The best toys were the ones we made ourselves. My favorite toy to make was a homemade contraption to slide down hills, called a chivichana. I used to be a menace with those things.

We want people to experience inner magic while in our playground, and to leave feeling happy and the exuberance of peace.

Mathias Crawford (@mfcrawford) is a Canadian living in San Francisco, where he designs games for Natron Baxter and is pursuing graduate studies at Stanford. In his spare time he enjoys watching cricket and dreaming up elaborate theories about the mundane.