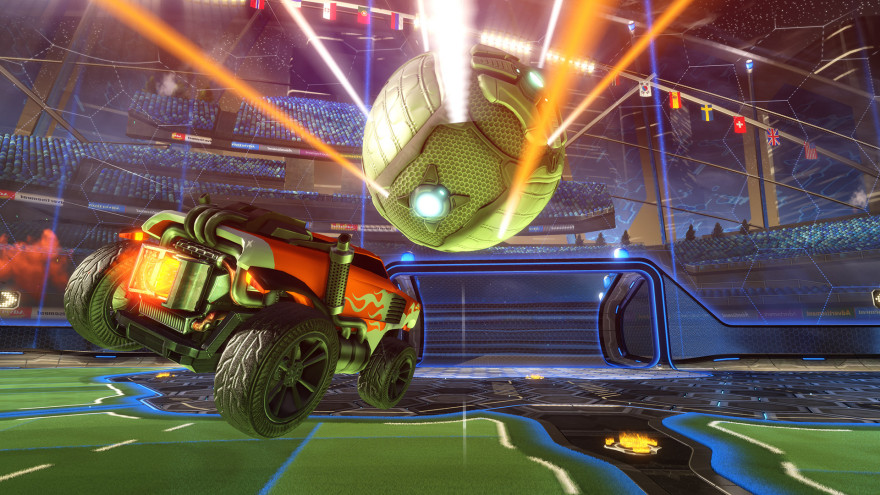 Rocket League is a game that is concerned with a great many things, but verisimilitude is most definitely not one of them. To wit, here’s an excerpt from Psyonix president Dave Hagewood’s excellent interview with Gamasutra about the game’s jumping mechanics:

Designing Rocket League‘s rocket-boosting mechanic was an interesting process; because it was so much more emergent than other games that we’ve worked on. Usually, we start out with a very concrete plan of what you want to do, but in this case we really started out with just a very simple mechanic: cars that jump.

We like cars that can jump. We know they’re fun to play with. Even in the earliest stages of development, it was just fun to drive around the map, and that’s when we realized that we knew we were on to something.

Before proceeding, I must stress that you should really read the whole interview. It’s glorious. Done? Ok, let’s proceed.

Rocket League is unhinged. It is the kind of game you imagine was invented in a dorm room after a couple bong hits too many. Yet “following the fun,” as Hagewood puts it, is hard work. You don’t simply throw a game out into the ether and have it magically turn into something fun.

In that spirit, Rocket League is a game with bonkers physics, which is crucially not the same as saying it has none.  “I’ve always been a fan of real-world physics in games; rather than faking things behind the scenes, I prefer to keep the physics simulation as pure as possible,” Hagewood told Gamasutra. “So we literally just applied a force to the back of the car, since the car is also a physics object, to create this turbo boost.” Rocket League’s physics are not this planet’s physics, but they are physics nonetheless.

In that respect, Rocket League’s closest relative may actually be the Super Mario Brothers. The game had no obvious connection to reality, but jumping—its crucial mechanic—was still far from random. As Kill Screen supremo/founder Jamin Warren explained on PBS’ Game/Show, the jumping “had its own specific physics. … The distance Mario hops is determined by calculations of gravity and velocity.” This realization prompted Business Insider to try and calculate which planet Mario must be on to experience such gravitational forces. Not earth, that’s for sure.

Rocket League is not a car game in a traditional sense. It owes as much to Super Mario Brothers as it does Need for Speed. And that’s fine. It’s still fun. But work goes into fun, and Dave Hagewood’s explanation of Rocket League’s jumping mechanic is proof of how much structure underpins what we feel to be loosely structured play.