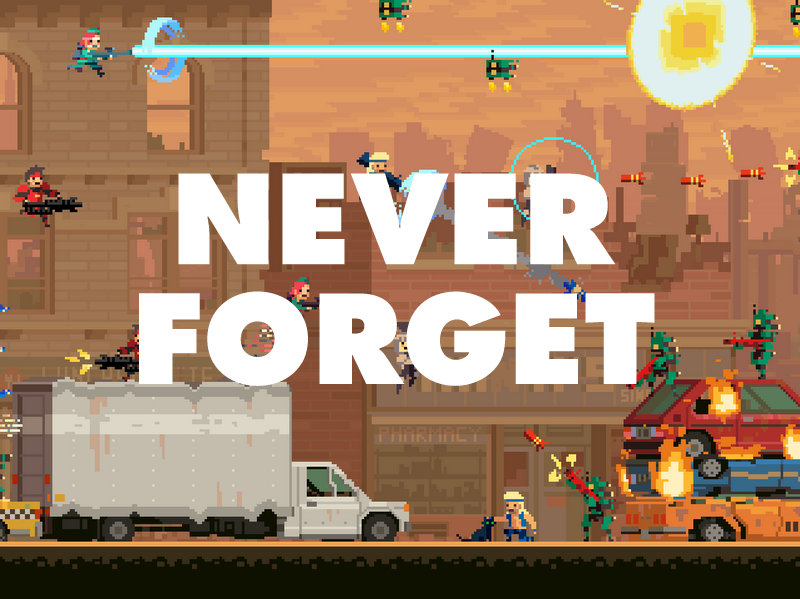 Capybara Games are obsessed with the past.

Their breakout hit from last year, Sword & Sworcery, delved into an old mechanic (classic point-and-click adventure) rendered with visuals from the past (chunky pixels) and swirled them together to create something wholly new, entirely of the present. Their next game, Super T.I.M.E. Force, engages in a different sort of T.I.M.E. travel.

The player controls one of five characters, dashing and shooting through a side-scrolling level reminiscent of Contra or Gunstar Heroes. But at any moment the player can stop T.I.M.E., rewind to a previous moment, pick a new character, and fight alongside your previous self. You have thirty lives to use, and sixty seconds to reach the level’s end. How (and when) you do so is up to you.

I played a demo at PAX East last weekend and came away with a strong feeling of nostalgia for my collection of VHS tapes. Each T.I.M.E. you “T.I.M.E. out” and reverse the game’s flow, the screen warps and scatters exactly as a movie does when rewinding a cassette tape in a VCR. The effect serves the purpose of showing you, frame by frame, your past actions, the better to pick your spot to re-enter the fray. But it also highlights how rarely we manipulate an entire sequence of images in the era of YouTube and Blu-ray. We skip from chapter to chapter. We view chunks excised from the whole.

In this way, we the viewer are ourselves outside of T.I.M.E., able to select our preferred moment with which to interact. Super T.I.M.E. Force reminds us how disconnected we our to the media we consume, even to the lives we lead, by dropping us in this digital limbo and seeing if we can, from one moment to the next, scratch our way out.

Go check your Twitter feed. Scroll down and see quips frozen in the past, an accumulating conversation in fits and starts. You see your own words alongside those of others, stamped in T.I.M.E. but still accessible by others. Super T.I.M.E. Force plays like Twitter reads, if only we could go back and save ourselves from that dumb comment or career-threatening outburst. I wonder if Capybara could have even made this game ten years ago; I wonder if the concept, of multiple selves unstuck in T.I.M.E. and co-existing like a Facebook wall given breath, even had a name before the birth of instant messenging and text messages.

Turns out it did. American philosopher William James coined the term “Multiverse” in 1895 to describe a set of parallel universes, which together comprise all that has happened but also all that could have happened. As cosmological theories go, it’s pretty comprehensive. (A clear and rational explanation of the theory is also way beyond my pay-grade; suffice to say, Marty McFly’s pursuits had more of a scientific underpinning than my twelve-year-old self would have thought when I first saw Back to the Future.) What Super T.I.M.E. Force lets the player do is break open the game’s multiverse, pick and choose when and where to continue, and seek out the best possible route to salvation.

As a play mechanic, it’s pretty damn smart. And fun—my short T.I.M.E. with the game cracked open a thousand other possible play-throughs I wish I’d chosen, or had T.I.M.E. to pursue. Interestingly, the players I watched had trouble picking up the concept. On the Main Menu, you can select “How to play,” which explains you have only sixty seconds to reach the end or you die. Each of the two players before me jumped right into the level, avoiding this important kernel of info; each of them died when the counter reached zero; and each of them thought a stray bullet ended their life and not the elapsed T.I.M.E.r.

Push players to slow down, read the instructions, begin at the beginning and follow along.

I wonder if this was part of the game’s concept—to push players to slow down, read the instructions, begin at the beginning and follow along. The simple readout of seconds counting down, one by one, is placed right at the top of the game screen. Yet each of those players I watched did not see it. Or, rather, they did not understand this concept itself, of sequential T.I.M.E., since so often we have the tools to skip ahead or cycle back. Super T.I.M.E. Force gives us these very tools but forces us to use them in a way we haven’t before.

In a speech given to Stanford in 1906, James cautioned his audience about the road ahead in a post-Civil War nation, wondering “how to sustain political unity and civic virtue in the absence of war or a credible threat.” Over one hundred years later, where consumers watch live television weeks later and stream music before an album’s released, can we sustain a consistent and regular forward momentum without looking back? Capybara Games says no. And if their game is any indication, maybe that’s a good thing.