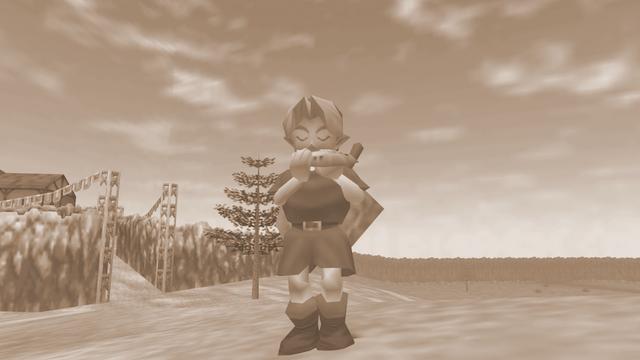 Let’s do a little experiment.

Boot up an action-adventure game with polygonal graphics (the boxy, cell-shaded kind) like The Legend of Zelda: Ocarina of Time. Find an area inhabited by non-player characters (the ones you don’t control), set the controller down, and simply observe what happens.

Even though you’re not playing, the characters don’t just stand there like statues. They breathe, look around, and fidget in place. They’re alive. The looping actions of these characters are known as idle animations, one of the subtle signatures of video game personalities. Games require idle animations because when you put down the controller, they need to keep going.

Characters that convey motion without really moving anywhere are not unique to games. There’s another medium that laid the foundation for idle animations: figurative sculpture. The systems that bring polygonal character models to life are not so different than great works of sculpture like Michelangelo’s David, if not yet reaching that artwork’s lofty accomplishments. In both cases, the figures in question are “always on” for the viewer. Idle animations could be considered the evolution of sculptural practice, resulting in virtual sculptures that move in the ways that their stone-carved ancestors always implied.

Likewise, while idle animations are not meant to be artworks in themselves, but rather building blocks that enrich the larger game experience, religious sculptural commissions like David were primarily intended to serve as ornamentation for the church.

David could actually adapt quite well to the videogame environment of The Legend of Zelda. Assuming designers at Nintendo put some clothes on it, David could easily play the part of a Hyrule warrior on the eve of battle. The sculpture’s relaxed contrapposto would make for a great idle animation, seeing as it already evokes one in stasis. The idea of David as a lowly Zelda villager runs counter to the mythos built up around the legendary sculpture.

Despite increasingly realistic graphics in games, most characters inhale and exhale like they’re being checked for pneumonia.

But bear with me a moment. If David had been installed in a row of similar marble figures atop Florence Cathedral, as originally commissioned, it could have been just another church accessory. As per the terms of the contract, Michelangelo sculpted David to fit and serve this religious purpose, but in his diaries it’s revealed that the sculpture had patriotic intentions as well. He wrote of David’s role in the city: “a civic hero, he was a warning…whoever governed Florence should govern justly and defend it bravely.” This labor in service of a greater vision carries on in videogame idle animations as gameplay-enhancing character studies.

In games, an idle animation is what a character does while they’re standing still, awaiting orders or interaction from the player. Typically, the default idle animation depicts breathing in a heavy, exaggerated fashion. See Soul Calibur III’s Seung Mina for example. Despite increasingly realistic graphics in games, most characters inhale and exhale like they’re being checked for pneumonia. Still, even these decidedly exaggerated loops, designed to let you know that a character is alive, can be used to an enriching effect.

Patient, playful, and pensive; it’s pretty easy to assign adjectives describing each character’s disposition based solely on how they stand there, waiting for you. Personality traits can be implied by figurative sculpture all the same, but idle animations function uniquely as a component of the videogame setting.

In Zelda and most other role-playing games, the world revolves around the player. Other characters feign preoccupation, but are almost always ready to honor the player’s presence when approached. Idle animations must acknowledge the “unnatural” nature of interpersonal communication with artificial intelligence in videogames and make the most of the situation within that context.

The most successful idle animations take the founding principles of figurative sculpture and adapt them to contribute to the game’s interactive narrative. Just because videogame characters can be programmed to animate doesn’t mean that conveying realistic human behavior makes the most sense in a game scenario. Idle animations have their own specialized craft, similar yet distinct from all other mediums that came before.

Michelangelo’s David may be over in Italy with a two-hour queue, but sculpture is everywhere real and virtual. Next time you come across one, continue our little experiment. Put the controller down and watch what happens.