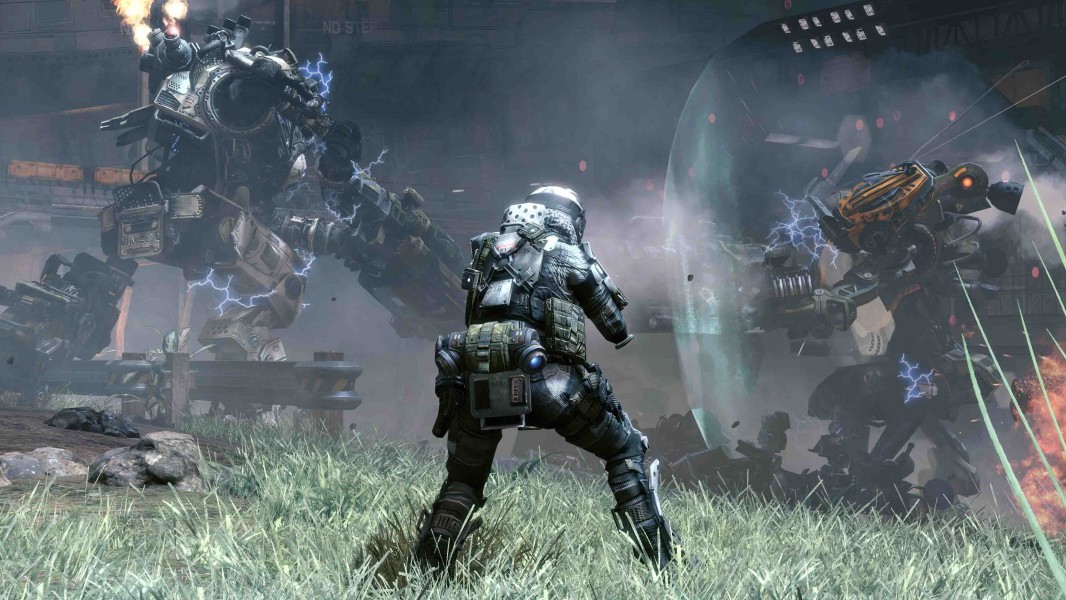 First-person shooters are easy targets. They are stereotyped as big-budget bullseyes, so sweeping in their scope they’re even described in language usually reserved for Hollywood. The games are often labeled “blockbusters,” and their opening-week sales are often touted to the press.

If you weren’t paying attention or aren’t familiar with a given title, you could easily confuse one of them for a high-grossing Michael Bay special-effects clothesline.

What does this have to do with Titanfall, the forthcoming shooter from dev Respawn Entertainment? Like the film industry before it, many of the game industry’s biggest creators are leaning on remakes and re-imaginings. As a rule, there is nothing wrong with revisiting the past, provided you have something new to say, but Titanfall is being praised as something entirely new within the new genre. I’m not sure that’s entirely true.

I realize the trajectory of the past three paragraphs and this piece’s headline may seem to be setting me up to say Titanfall is a bloated blockbuster devoid of anything new, and that’s not my intention at all. However, after spending an evening with the game at a press invite in Los Angeles in late January, I don’t feel like my opinion on the multiplayer-only shooter can be summed up that easily. Unlike Titanfall itself, my thoughts on the game are slightly messy—and that’s the problem: Titanfall is too streamlined, too engaging, and perhaps too fun.

How is that a criticism? Am I crazy? Hear me out.

Obviously, nothing exists in a vacuum, and that certainly applies to games or anything anyone creates. We all take inspiration from the world around us, and asserting that Titanfall takes cues from Halo, perhaps the definitive 21st century FPS, is hardly a stretch. But, more specifically, I believe Titanfall was built entirely on Halo dev Bungie’s Icarus-like quest to craft the perfect “30 seconds of fun,” a concept/mantra dissected in a 2007 Wired piece. Bungie told Wired “the idea was to have Halo repeatedly immerse players in hectic battles that would last for half a minute—just long enough to create heart-thumping chaos and the risk of death—before offering a respite.”

In Halo, that respite comes via some forward momentum through linear exploration, or pre-determined breather moments where you can choose how to proceed through the environment. After that, though, it’s back to the loop. Always.

Jaime Griesemer, a designer who has worked on six Halo games, elaborated on this to Joystiq in 2011, adding:

It’s doubtful Halo was the first game to tinker with alchemy on time and space in a game experience, but it certainly seems like the first time any developer articulated that this is what a shooter should or could strive for.

It was a domino other devs willingly lined up behind: the creators of FPSes are approaching these games as loops within loops within loops. Ironically, it has created an ecosystem that is also looping these ideas and design principles around in a macro sense in games series, taking us to Titanfall, arguably the perfection of said loop—and the latest in a healthy tradition and long line of FPSes that have increasingly refined that tiny chunk of play, until it’s only a few seconds of respawn and then death, with some amount of killing in between. It makes sense that a designer would want to achieve perfection, but boy is it tiring to endure for hours and hours.

What if we could get players in this loop and never let them out?

Titanfall, therefore, is the result of some very smart folks wringing their hands and saying to one another: “What if this loop never ended? What if we could get players in this loop and never let them out?” On paper, it sounds exhilarating, but in practice, that wasn’t my experience. The latter can be chalked up to my own personal tastes likely, but the former is worth exploring in further detail as it hardly matters, ultimately, whether one person likes a game and another doesn’t. People will still buy Titanfall, and they should, but blindly embracing the course FPSes are taking without pumping the brakes to check where the tire tracks are heading would be to blindly embrace the loop FPSes are locked in.

Halo hit in 2002. Then, remember how a remake, Halo: Combat Evolved Anniversary came out in 2011? There’s a good reason for that beyond mere marketing: The original Halo was downright paltry and almost quaint by 2011 standards. It’s amazing how far games can seemingly progress in less than decade, but the original Halo had no online multiplayer. Seems laughable today, but true. What else was Halo lacking?

That’s what devs in the early 2000s were trying to figure out in pursuit of the next “Halo killer.” Call of Duty debuted in 2003 with shorter loops of action, weaker enemies, and quicker player deaths. Everything happened faster. Indeed: Critics complained the game was shorter. You know what many critics complained about in Halo? The game felt repetitive. Few in the media complained about COD being repetitive until a few entries later in the series. Regardless, COD was not intent on holding still, arguably reaching its creative apex in 2007 with Call of Duty 4: Modern Warfare.

Modern Warfare (and, before it, Battlefield 2) weaved in an overarching sense of RPG-like growth and grind with every death you amassed or incurred. Fragging or getting fragged is an inevitable part of life in an FPS, and by giving your death or others’ deaths more significance, dying no longer becomes a frustrating pitstop but instead a respawn with purpose or bragging rights. That increasingly tiny loop of action was now part of an epic tale of progression. Leveling up, usually relegated to roleplaying games, now became part of the FPS lexicon.

Where Titanfall mecha-blazes its own trail, though, is by ditching single-player. It’s a mode that many devout FPS players either inevitably become apologists for or ignore altogether, and with good reason. Many multiplayer FPS games treat their single-player modes like bloated eight-hour tutorials so you have a fighting chance when you pop into multiplayer.

“We make these single-player missions that take up all the focus of the studio, that take a huge team six months to make, and players run through it in 8 minutes. And how many people finish the single-player game? It’s a small percentage. It’s like, everyone plays through the first level, but 5 percent of people finish the game. Really, you split the team. They’re two different games. They’re balanced differently, they’re scoped differently. But people spend hundreds of hours in the multiplayer experience versus ‘as little time as possible rushing to the end’ [in single-player]. So why do all the resources go there? To us it made sense to put it here. Now everybody sees all those resources, and multiplayer is better. For us it made sense.”

This all-killer, no-filler philosophy shines through in Titanfall brighter than a thousand exploding stars.

Like Halo, Titanfall is a sci-fi-flecked FPS set on a war-torn planet. With no single-player mode whatsoever, Titanfall has you and your ersatz crew of allies suits up as either the Interstellar Manufacturing Corporation or the Militia—but when you get right down to it, you and your cronies are a bunch of pilots blasting away at another bunch of pilots while everyone anxiously waits to deploy the titular verb. Once a designated amount of time has elapsed, you can summon a titan to fall from the sky. It is awesome. It’s a giant mech robot you can climb inside, and it controls much like your human counterpart, only equipped with missiles, the ability to hold oncoming bullets in the air and boomerang them back whence they came, and everything else you’d want from a top-of-the-line mech in 2014. Not to be outdone, as a mere pilot, you can wall-jump and double-jump and do other superhuman things.

Plot elements are threaded through the never-ending deathmatch, but let’s be honest with each other: Most people aren’t playing a shooter with giant robots to get lost in the mythos. We want to shooty, and shooty is fun. Titanfall‘s shooty is extremely fun.

So what’s the problem?

A 30-second loop allows for contrast and reflection.

What Titanfall is forgetting, though, is the thrill of the chase. Not that Halo got it perfect, or that perfection is even something to be striving towards, but a 30-second loop allows for space. It allows for contrast and reflection. You get time to get your bearings, decide what you want to do, and dive in.

Pavlov’s dogs would stop drooling if they were always gnawing a juicy London broil. So, hey, Titanfall: Stop ringing the bell non-stop and give our endorphin glands a break. It’ll make the highs higher if you just give us a few lows.