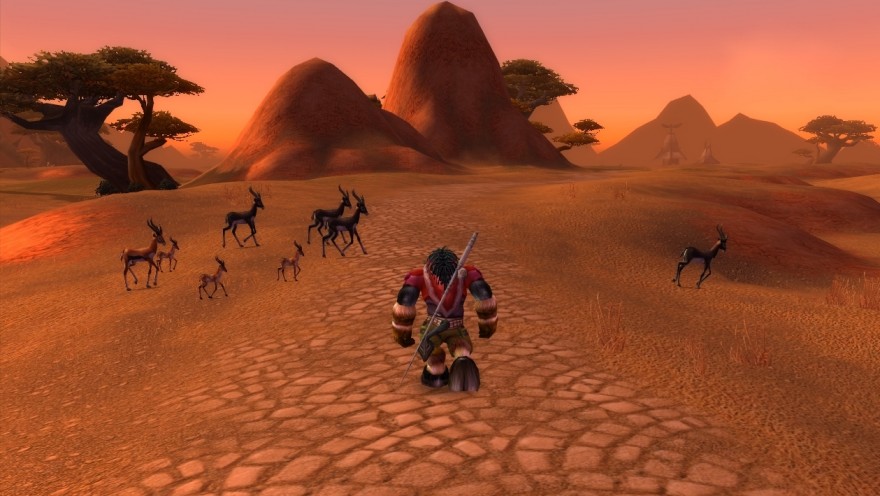 Guilds are intrinsic to any Massively Multiplayer Online game; they’re social institutions that epitomize some of the core tenets of the genre itself: community, teamwork, a sense that you are part of something larger. So it’s weird to think about players who climb to the very upper echelons of an MMO like World of Warcraft completely guildless. It’s even weirder to think about players like Sin—a level 90 Pandarean rogue—who violate the very spirit of a guild. Sin’s in a guild, sure, but it’s only populated by his alternate characters. Sin’s guild mates are Sin.

It almost seems like a betrayal to the whole genre. MMOs are supposed to be social; nobody should come to them wanting to build barriers. Why drive others away? Why not just play a singleplayer game instead?

Gabe, a friend of mine, has been playing World of Warcraft intermittently for about seven years. He started off playing with a high school friend, the same guy who introduced him to marijuana. “A real pusher, that one,” he told me. Time went on. Eventually Gabe felt he was addicted to WoW, so he uninstalled the game and literally broke the discs. Five years later it’s back on his computer, but this time he doesn’t know anyone who plays. He’s retreading old ground: bidding at the Auction House in Ironforge, fishing in Stranglethorn—all on his lonesome.

Yet he’s enjoying himself. The pure scope of the game has given him plenty of room to indulge his completionist compulsions. There are new (to him) forests to explore, a cooking skill to be leveled up, and many, many shiny pieces of loot to acquire. And while the potential for social drama intrigues Gabe, he mostly avoids other players. He’s never really been one to try and make friends online. That holds true for WoW, especially considering his spotted past with it. “There’s just a lot of shame involved in this game,” he told me. “If I were doing it with other people, the shame would be intensified. I know there are better things that I could be doing with my time.“

That’s maybe the darkest answer to the question. Enjoying an MMO for the ‘massively’ part, but feeling too ashamed about it to enjoy the ‘multiplayer’ part.

I asked around on the World of Warcraft forums and got a boatload of responses. There were a few who, similar to Gabe, initially played with friends and family but then got left behind. Though they enjoy the game for this reason or that, virtually socializing just doesn’t quite cut it for them. Sin admitted to being a misanthrope, albeit one who enjoys “questing and fishing and chasing achievements.” However, the vast majority of comments were from people who didn’t want to feel tied down by others. A level 90 shaman, for instance, who enjoys being their very “own little personal industry” and tries to remain completely self-sufficient, no trading needed. Most of the other responses in this category came from people who just don’t have the time. When they can sneak in an hour of play, they don’t want to have to deal with other players’ schedules or preferences. Two quests and done—sorry, no time to help you do yours.

The best moments in WoW are the ones where he feels like he’s in charge.

It’s about control, really. Gabe talked to me about how the best moments in WoW are the ones where he feels like he’s in charge, where he’s not being driven by his compulsions. Things like Battlegrounds (the competitive player vs. player mode) or running dungeons feel like options he has to choose, ones that involve engagement as opposed to skinning the same animals again and again because he feels driven to get his leatherworking skill up to 100. We have more fun when we feel in control.

Sherry Turkle’s a professor at MIT who spends a lot of time examining the social and psychological impact of technology. In her book Alone Together she argues that texting and social media brings people together while simultaneously isolating them. “People can’t get enough of each other, if and only if they can have each other at a distance, in amounts they can control,” she said during one of her TED Talks. MMOs cater to this desire, letting players run anonymously through a world full of people, and interacting with no one.

Of course, the parallel isn’t one-to-one. MMOs are not just social conduits—they’re games, first and foremost. Plenty of players—like Sin up there—enjoy the game inherently. They just like the mechanics, art, or any other component present. Thing is, even they benefit from features that are set in place thanks to the fact there are lots of people playing at once. In terms of WoW, maybe the main draw for some is fishing but you can still dip into things like the Auction House, Battlegrounds, or dungeons for fun. Playing it alone gives you that freedom of choice; you’re not weighed down by the social burden.

WoW also gives you more than two or three verbs by which to connect with people. You might not talk to people regularly, but you can still trade with them, spontaneously help someone in a fight, wave (or generally emote), and see them questing in your general vicinity. That last one is important. World of Warcraft feels much more lived in than a game like, say, Skyrim. Sure, Skyrim has houses that you can go into and dig through to see some indication of NPC’s lives, but MMOs have real, live people. It lends heft to your actions if you’re doing it in an environment that feels more like a real-world one.

Ultimately, Gabe, Sin, and all those folks on the forum aren’t actually playing World of Warcraft alone. They’re just not playing with anyone. Or in Turkle’s words, they’re playing alone together.