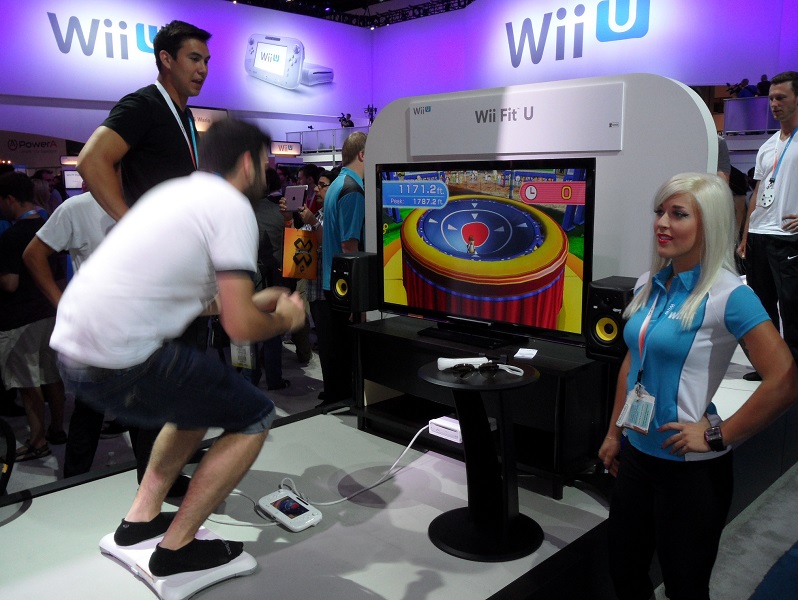 The new year brings with it many things: the hanging of a fresh calendar; the promise of televised college football games named after crops; the searing regret of a year’s worth of unkept promises; and of course, a fresh batch of new ones to fill the coming months. So it’s the perfect time for Nintendo to release into stores Wii Fit U, their latest iteration of last generation’s fitness game phenomenon that sold over 40 million copies worldwide. The only difference is this time they’ll encounter a muscled opponent ready to push back: Microsoft launched their own fitness program, Xbox Fitness, with the recent release of their new console. While the initial goal for each piece of software is the same, the end results are oceans apart. Each company’s efforts at getting their customers off the couch show a striking difference between two distinct philosophies.

Your session in Wii Fit U is hosted by an anthropomorphic scale. The same Balance Board you step on to engage with the software’s games is onscreen, asking if you’ve had an afternoon snack, waving goodbye with its curved white plastic non-hand. This epitomizes Nintendo’s approach: though exercise is important, this does not have to be a serious endeavor. The goal is to have fun.

One of the new activities on offer is called “Trampoline Target.” I can think of no better corollary to unbridled joy than jumping on stretched rubber and being propelled thousands of feet in the air. The Wii U GamePad adds an intriguing dimension: Set the controller with its embedded screen on the floor in front of you; the TV screen shows your surroundings as you sail skyward, but look down and see the earth below get smaller and smaller as you ascend toward the clouds. It’s a startling effect. Yet the view adds nothing to the game’s effectiveness as a clandestine lunge workout. (You’re meant to bend your knees and stand upright with every trampoline bounce.) Other new games include walking dessert trays over to hungry diners without spilling, exploring an underwater reef, and sliding down a virtual luge course.

Xbox Fitness, on the other hand, is no game.

Xbox Fitness, on the other hand, is no game. Your host is not an animated bathroom scale but a real person: Jillian Michaels, say, or Shaun T. The program acts as more of a Netflix for exercise DVDs: choose from dozens of workouts, including the latter’s “Insanity!” series or the popular P90X. Then you simply watch the video, like you would had you bought the set at Target. There is an additional frame that shows an outline of your body, using the refined Kinect camera of the Xbox One to track your movement and give real-time feedback. Kinect can even approximate your heart-rate using some crazy heat-sensing technology that calculates blood flow through the skin.

Within these two releases lie the key to unlocking how very different these two companies are. Where Microsoft’s fitness software features the chrome-shine of Shaun T’s sweaty bald head, the face of hard-won results and rigorous effort, Nintendo’s spokesperson is the bathroom scale itself, the very object of doom we dread stepping on. What once was the giver of bad news now chirps with guileless instruction. The sand-line has been drawn. On either side lie near-opposites: Pragmatism vs. Playfulness. Intensity vs. Exuberance.

And both have hidden costs. Though Xbox Fitness is a free download, only a scant few workouts are available from each program before you need to buy the entire pack. And though Wii Fit U only requires the same Balance Board you bought six years ago, the most intriguing addition is the Fit Meter, an optional purchase the software repeatedly mentions.

In a market where FitBit and Nike+ are more and more visible, Nintendo is betting on the appeal of its less intimidating, lo-fi approach. The device (about the size of a thick Nilla Wafer) features a rectangular LCD screen and three buttons. What you lose in smartphone integration and whiz-bang tech, you gain in cheeky fun and a surprising amount of useful data collection. Stick it in your pocket or clip it to your waistband and the meter tracks steps, burned calories, temperature, and changes in altitude. Zap the data into your Wii U GamePad at the end of the day and see your results in multi-color graph form.

Reviewing a recent day’s activity, I was impressed how accurate it charted my actions, especially the altitude: it could tell when I ascended stairs, or sat high on the 12th floor of my office and worked for an hour, or dove below in a subway train. Once the numbers are transmitted into the game, simple modes make inventive use of the data: You can traverse walking routes of famous cities or hike up landmarks like the Pyramids. My physical exploits helped my virtual Mii to climb the Statue of Liberty, after which I won a new workout outfit. Virtually walk around Sydney and earn a t-shirt featuring a Koala. Rewards at Gym Nintendo are, for better or for worse, cute accessories, not the painful burn of lactic acid or a sweat-covered floor.

The Meters can even talk to each other. Zap data into the other and individual activity will be compared, after which you’re given a simple message summing up your compatibility. My wife and I each wore our own for a day. Before dinner we held them up against each other, like some stand-in for intimacy in a disease-free future. Our tiny screens gave us the bad news: Apparently, we traveled down “Different Lanes.” We frowned and embraced, ready to prove the damning results wrong.

If you require a five-point nano-hydroxinator in your calorie-counting bracelet, move along. If you want a futuristic way to watch pre-taped exercise videos, check out Xbox Fitness. If you’re smitten by the idea of your Mii’s LCD face blinking on a pocketable pedometer, Wii Fit U may drag you back to Nintendo’s bright little gymnasium.