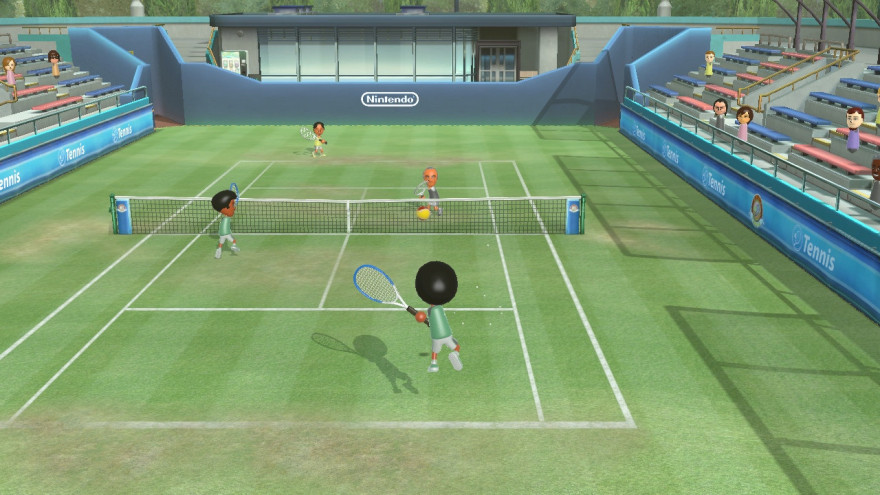 I’m standing again, thwacking tennis balls into buckets placed across the court while waiting for a match. I don’t have to wait long. Tyler from Florida is ready. Cut to a dramatic Versus screen, each Mii head on either side of a flaming lightning bolt bisecting the television. A pre-selected message, either typed or scrawled out on the Wii U GamePad, welcomes your opponent. Most players so far opt for one of the defaults: “Let’s do this!” Tyler’s text bubble announces. I go for ominous threat. My hand-drawn face is shown in profile, a line of dashes shooting from my eyes, the words scribbled in my own handwriting: “I’m watching you.”

This is the element that’s been missing from Wii Sports for seven long years: Long-distance intimidation. I had no idea I wanted to play Wii Tennis competitively with strangers until I fired up my first match and saw two identical Miis on the other side of the court, maniacally swinging their racquets as if swatting invisible, persistent bees. That this person was from Ohio only cemented my immediate urge to crush him. (I grew up in Michigan; state rivalries may be juvenile and unreasonable, but they’re real.)

The download-only Wii Sports Club for Wii U takes advantage of our own geographic loyalties and organizes all online play by region. You join the Club of your choice: Canada is organized by provinces, states in the U.S. In Europe, large countries are broken down into cultural districts, so a Frenchman in sunny Montpellier can square off against an opponent from grimy Dunkerque. Basic stats are tabulated and lumped together: You’re not only playing for your own Win-Loss record—you’re contributing to the greater good of your ‘mates. Living now in Boston, I feel a kinship with fellow Bay Staters swinging their Wii Remotes anew. The pride of Massachusetts depends on me! The burdens are heavier, the rewards sweeter still.

The original Wii Sports long ago lost its novel luster. Club aims to rekindle the spark. For me, a small flame burns again. I’ve spent more time in Tennis than Bowling, which is still just as smooth as before. In the coming months, Baseball, Golf, and Boxing will each be added to the roster, each tweaked and updated with refined control and online play. But for now I stay the course, slowly accruing more and more wins on the tennis court, doing my best to pull Massachusetts from their current mediocre ranking.

After victories, I treat my bested opponents as aimless disciples.

Each match is a Doubles contest, whether you’re solo or joined by a friend. Most of my matches took place between two pairs of clones–you and your opponent controlling identical versions of your respective Miis on the court, volleying back and forth for a quick seven points. Each shot matters with so little room for error. The odd constraint makes for brisk, drama-laden contests and swift momentum from one game to the next. At the end of a match you can choose another typed or drawn comment to express yourself. After victories, I treat my bested opponents as aimless disciples: “Go now,” the text bubble instructs with a push of a button, “and share my secret with all who seek truth!” If I lose, I say nothing.

Either way, we never see or hear the other player. Wii Sports Club offers no voice chat, just these pre-selected messages allocated to one of three directions of the controller’s D-pad. The lack of voice support has long seemed anachronistic; Microsoft has built up an eager community of online gabfests, packing in a microphone with premium versions of their console since 2005. Sure, it’d be nice to chat with friends across the country while tossing lazy strikes down the alley. But there’s something elegant about Nintendo’s streamlining of communication into visual signs.

Instead of a constant stream of chatter in my ear or awkward silence between points, there’s only the game. You can pick your moments. I watch a slo-motion replay of an opponent’s ace. As my feeble attempt whiffs air, they pop up a facetious “Bummer.” There’s a level of tact available here, but also opportunity for mindgames and distraction. And simple, silly playfulness. When your next online Bowling match includes a familiar-looking Mii, and upon your gutter ball he chimes in with, “The Dude abides….,” you will understand what grace truly is.