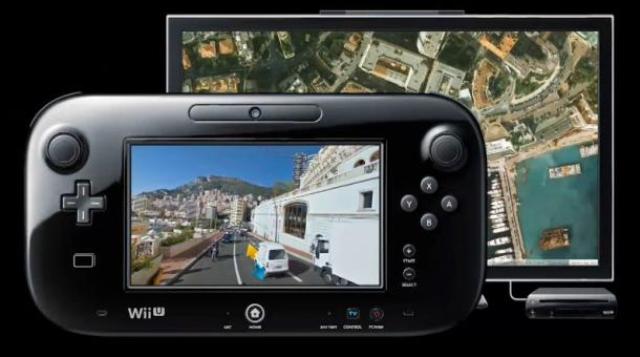 Nintendo launched the Wii Street U service for their new console last week in Japan. Our old editor Joe wrote about the still-unchristened idea last fall. The free app allows you to browse and use Google Maps on your TV, with one very big twist: You can use the GamePad, the system’s controller-with-a-screen (and motion-sensing gyroscope), to scan the 360 degree panorama in Street View in real-time.

Some will label this a useless gimmick. But it might just be the feature to push Nintendo’s HD hardware into the hands of millions.

In Jesse Schell’s talk at DICE this past week, he discussed the problem of traditional controls in a landscape being infiltrated by iPads and VR helmets. Relating a story of his daughter calling a PS3 controller “old-fashioned,” he cited a need for “magical interfaces,” something to intrigue the uninitiated. Nintendo thinks the Wii U GamePad can be that new mode of interaction unlike any other, but they first need to get it in your hands.

Previous hardware with explosive popularity had a built-in bridge to reach those beyond the savvy gamers and curious technophiles. You need to reach the technophobes, too. Game Boy had Tetris; Sony’s Playstation 2 played your DVDs. Google Maps has become an indispensible part of navigating our analog lives. Wii Street U gives anyone access to the entire system of panoramic photography offered by the service, but through a portal more intimate than your labtop and more sharable than your phone.

“You have to bring people a gateway to the promised land,” Schell says. Why not start with the Trevi Fountain of Rome? Perhaps your father always wanted to visit, but can’t travel due to his job. Place the GamePad in his hand and watch as he pans across the Piazza di Trevi. Next he wants to see the street they grew up on. He remarks the controller is more comfortable than expected.

Game Boy had Tetris; Sony’s Playstation 2 played your DVDs. You need to reach the technophobes, too.

Seeing the view on the handheld screen smoothly follow your movement is different than flicking a scroll-wheel on a mouse, or dragging a finger along a trackpad. Maybe your sister sits on the couch behind Dad, giggling, then pointing to the TV, with an overhead view of the area, because she spotted something intriguing. He pans the camera forward and presses a button, shifting his first-person view to the TV so she can explore alongside him. This is fun, he might think. Maybe I ought to try a game on this thing.

This isn’t my experience. Western territories won’t have the free application until later in the spring. But this is exactly what Satoru Iwata, president of Nintendo, hopes will happen across the three million or so homes that already invested in his company’s Wii U, spurring others to do the same. It’s no Tetris. But if it puts a controller in a non-player’s hand, they’re one step closer to picking it up again in the future to seek out new lands, promised or otherwise.