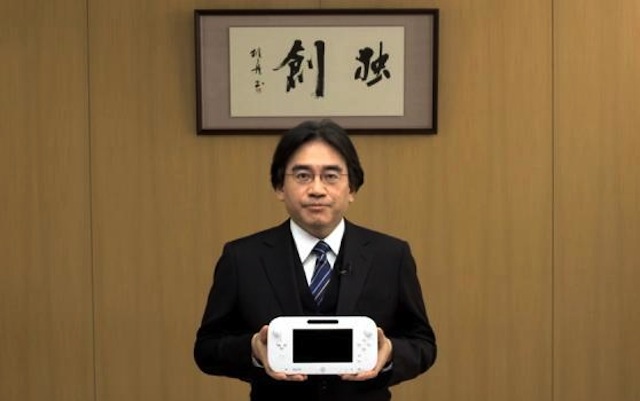 Nintendo can be myopic. Some might refer to the Kyoto-based company’s high-tech allergy as such; the Wii’s low power saved them money up front, but cost them the last few years of high-profile 3rd party support. Interest in the console waned faster than anticipated.

With the Wii U, one may question Nintendo’s decision to go with current-gen hardware again, a lack of future-proofing against the inevitable competitors from Sony and Microsoft. This is a concern only time will bear out. Satoru Iwata, President of Nintendo Corporate Ltd., remains confident, telling an interviewer on Gamasutra that their new system “is going to be important for the world.” The more present issue, for me, is my own lack of long-distance vision: namely, my glasses.

The first time I held the GamePad in the privacy of my own home, it felt as many have described it: Lighter than expected, with suitable rear-grips and a pleasant patina of gloss over top. Then I looked up to the TV screen. When I looked back down, my eyes met an indecisive reflection: the view was half-blurred, half-sharp. The bottom ridge of my glasses bisected the GamePad. To view it full-on, I had to either tilt my head down and stare directly through the lenses, or nod up and glance below the rims. My impairment is mild enough that I can read books or play a handheld without correction. To watch TV, I need some help. The Wii U GamePad, then, presents a surprising quandary. More than the oft-heard, “Which screen should I look at?” the more necessary question could be, “How much does Lasik cost, again?”

A few days ago I was playing New Super Mario Bros. U when my wife came in. My baby’s got a soft spot for serial killers; Criminal Minds was on.

In time, I made the adjustments needed. But the issue highlights the many challenges Nintendo will have in selling this new system to the masses. The Wii Remote provided an instant shot of euphoria the first time you tried it; the included Sports games were recognizable, unintimidating, and the Wii’s gesture controls realized these school-yard actions with a New Age ease and wonder.

As soon as he bowled his first digital ball, Pops got it. But he’s also got bifocals. This could be a big unforeseen “Uh-oh” for second-screen gaming.

One way in which the GamePad will benefit Nintendo’s broad market is its ability to play games on the controller itself. Early commercials have highlighted the situation as a perk: “Mom wants to watch Deadliest Catch, but Billy is playing Mario. Now they can do both!” This has to be the first time a game company has actively pointed out the in-home schism created by their very products. But a problem remains.

A few days ago I was playing New Super Mario Bros. U when my wife came in. My baby’s got a soft spot for serial killers; Criminal Minds was on. Tap the TV button on the GamePad and a simple remote interface comes up on the controller’s screen. I hit the Input button, switching the television back to Live TV; Super Mario remained awaiting my command on the GamePad. What the commercials don’t show you is the next ten minutes—the player sitting on the couch, immersed in their game, while the watcher watches their show, each cognizant of the other and their diverted attention.

This is no different than any mutually-occupied living space: one reads a book while the other types on their laptop, et cetera. But for some reason I felt overly self-conscious playing while my wife sat a cushion over, more so than while checking Twitter in the same room. I think it’s the switch from television to lap—while a portable device is always personal, the screen always within your grasp, that shift from the shared big-screen to a private small one enacts a kind of psychic violence to the room. This was once entertainment for all; Now it’s just for me. We sat silently next to one another, each immersed in our separate worlds. Satoru Iwata’s stated goal for Wii U, of bringing people together, of changing the world, begins to sound like a mistranslation.

What the GamePad does bring together is a unique melding of sound. The controller has its own speakers. Certain games are programmed for this; the main theme will play on the TV, while an extra set of harmonic beats will emit from your hands. The effect is something like a dual-layer of audio, your television laying a foundation while your controller adds texture. The swirling ambience of the Wii U Home Menu is enhanced by a tinkling of percussion. Even in games that play the same track, that distance between audio outputs creates a subtle reverb, giving an echo-y richness and added snap to a collected coin. It’s no killer app, but an unexpected benefit to offset my initially vexed vision. Call it a push.

How Nintendo will sell this machine to holiday consumers and beyond is an unknowable question at this point. As always I imagine the answer will be, eventually, a game. Tomorrow I’ll give impressions of the one with the best chance to make you a believer—or weep at the tragic undoing of your childhood heroes. Either way, know this: There will be Pachinko.

The Wii U Diaries, Day 1