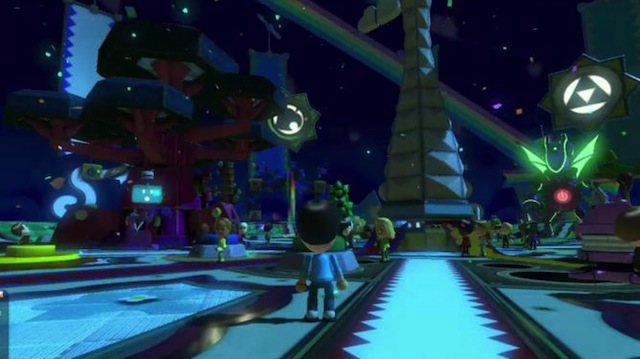 Nintendo Land is a virtual theme park starring the company’s many characters in carnival-esque offshoots of their original series. It comes included with every Deluxe Set of the new system. As the game that comes in the box, its burden is threefold: 1) demonstrate to first-time users of the Wii U why this system is special and different and worth your continued allegiance; 2) fulfill the rabid Nintendo fan’s desire for their favorite franchise characters until more full-length, proper versions of these games arrive later in the system’s lifespan; 3) reignite the passion of lapsed fans who have moved onto other interests.

In my short time playing the game, I do not know whether they succeed on all or any of these fronts. But I do know this: Nintendo Land will stoke the impulsive fires of gambling addicts. Also: You will cuss a lot.

Early previews revealed a Pachinko mini-game within the park. I thought this quaint, a gesture to countrymen who frequent arcade parlors and gamble their salary away. “Now I can be like daddy/mommy!” I imagined a young Japanese child saying, as they spend virtual currency in the safety of their Wii U. Only after playing do I fully value the inclusion.

Pachinko is played on a vertical board studded with pegs. You release little metal balls from the top and they trickle down; if they land in certain spots, you earn a prize. A report by Reuters in 2005 estimated that Pachinko parlors in Japan rake in over $350 billion a year. I’d never understood how this Eastern equivalent to the slot-machine was so popular. But this dismissal was based on ignorance. I now realize why my sub-conscious directed my attention away from the gleaming lights: Pachinko holds a dreadful power over me. After spending time in Nintendo Land’s mini-version, it’s easy to see the appeal, and its efficiency as a money-sucking pit.

As you play the park’s many attractions, you earn coins. These coins can then be spent to earn new elements of a central hub plaza: statues, tchotchkes, a jukebox. But you don’t just purchase them. Instead you drop a coin down the Pachinko board and hope for the best, trying to activate a number of sensors at the bottom of the board. Land a coin in each and you win a prize. The simple mechanics themselves point to the obvious “money-pit” metaphor—you drop a coin, it plunks around, then falls into a hole. Freshly washed windows have been less transparent. But as the bird flies into the glass, so, too, does the Pachinko player drop their coin, again and again and again.

As five subsequent coins bounced off a peg and missed the last remaining sensor, I yelled, louder each time. The sixth coin fell true; I felt vindicated, a soothsayer among the blind. I had done nothing but release my grip. Each successful round triggers a Question Block to burst from a central tower. Amble over to it and find out what you’ve won.

Over time you build up your theme park from a barren oval of reflective surfaces to a mini-metropolis teeming with animatronic life. But you’ll need to earn, then drop, a whole lot of coin to do so. It’s a clever way to reward replaying the main game’s attractions. With certain personality types, the feedback loop of frustration and delight might well usurp all other concerns, the way devoted FarmVille’agers tend their crops while neglecting the baby. And this is but a bonus feature. I’m hooked and I’ve barely stepped aboard the ride…

But I’m an easy mark.

Earlier this week, I invited a friend over to play. He’s deep into Assassin’s Creed 3 right now and loving it. He sunk way too much time into Skyrim last winter. He owns a Wii but hasn’t turned it on in years. He is the Lapsed Nintendo Fan. Exactly the kind of player Nintendo would love to entice back into their fold. But will he want to snuggle again with those creature comforts from his past?

“Oh, I got this,” he says. Momentum is a fickle companion; he soon runs into a wall. “One more time,” he says.

I turn the system on and hand LNF the GamePad. His first move is to flip the controller vertically. An iPad would have swiveled the image to fit the orientation; the GamePad just looks crooked. While I set Nintendo Land up, he checks his new iPhone 5. Perhaps he’s already gone, swirling in the abyss of a capacitive touch Retina Display. But then he notices the golden triangle logo of Battle Quest, the Zelda-themed attraction. The iPhone is put away.

On the television screen, a glowing Triforce floats down into the hands of LNF’s Mii, dressed as Link, for he has vanquished more foes than me. The phrase “heart of a champion” may have been uttered.

Next I watch him play Donkey Kong’s Crash Course, a one-player mode where you tilt the GamePad to maneuver a small cart holding a fragile orb through a 2D series of girders and platforms. “Oh, I got this,” he says. Momentum is a fickle companion; he soon runs into a wall, a yellow ‘splat’ of chalk-drawn banana punctuating the failure. “One more time,” he says.

We laugh—correction, I laugh—as he smashes and wrecks and tumbles over and again. Soon it is my turn. My tittering dissolves, replaced with the silent awareness of LNF; he knows better than to chortle, having been crushed by the gauntlet himself. Instead we call out maxims best known to sailors. The transcript of our commentary will remain off-the-record, for my nephew may read this article, and I shan’t taint his vocab with our salty tongues.

We then moved on to New Super Mario Bros. U—but let’s save that for tomorrow. Besides, I have coins to drop, prizes to acquire. My friend departs and we shake hands with manly grips. Thanking me for the preview, he gives an ambiguous capsule review, keeping his Lapsed status in limbo: “Call me when you get some new games.”